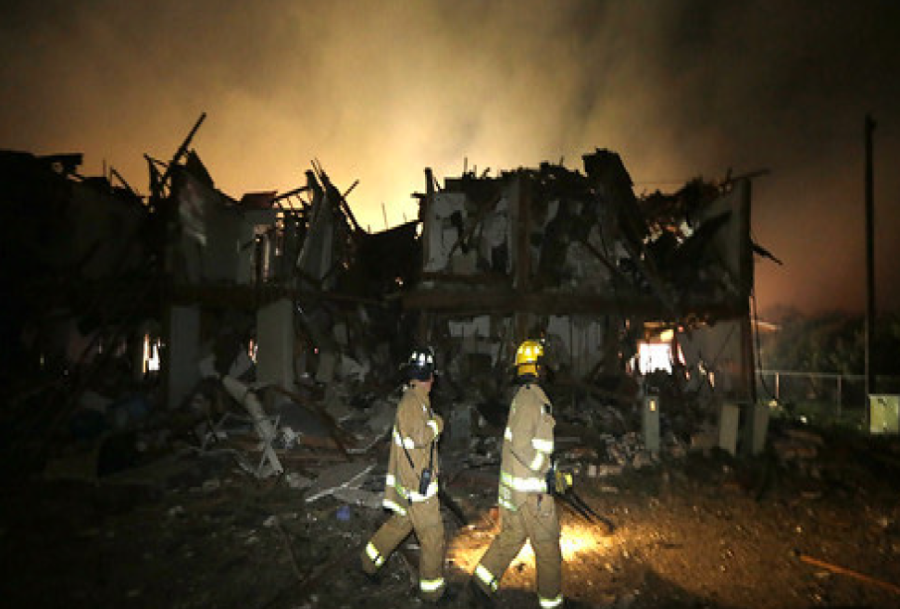 The 2013 fertilizer plant explosion in West, Texas, resulted in the death of 15 people, an additional 150 people injured, and nearly 150 buildings being destroyed or damaged.

It has been six weeks since the Weaver Fertilizer Fire, and the residents of Winston-Salem are still reckoning with the after-effects of the catastrophe. The Weaver fire, however, was preceded by a nearly decade-long struggle for legislative protections for environmental chemical disasters, punctuated by similar ammonium-nitrate disasters worldwide.

The fire at the Weaver fertilizer plant is not an isolated occurrence. The National Fire Protection Association (NFPA) reported an estimated average of 37,910 fires at industrial properties each year between the years 2011 and 2015. These fires have caused an average of 16 deaths and $1.6 billion dollars in direct property damage per year.

At the midpoint of this timeline is the 2013 West Fertilizer Plant Explosion, an ammonium-nitrate explosion in West, Texas that resulted in the loss of 15 lives. Shortly after this fire, President Obama issued an executive order to enhance federal coordination concerning chemical storage, inspection planning and chemical-facility-use information. It also modernized standards and regulations for safety and security in a chemical facility.

This executive order was followed with revisions to the EPA’s Risk Management Program (RMP) regulations drafted in 2014. The rule required facilities that use potentially hazardous chemicals to develop an action plan for preventing a chemical accident, spell out the effects of a potential accident and develop emergency-response procedures if a chemical disaster occurs.

One of these key proposed revisions to RMP regulations was the addition of ammonium nitrate to the list of high explosives. According to the EPA’s 2014 Request for Information regarding RMP regulations, ammonium nitrate has been the cause of several industrial explosions in the United States, including a 1947 industrial explosion in Texas City, the deadliest explosion in American history.

This explosion caused a “subsequent chain reaction of fires and explosions in other ships and nearby oil-storage facilities, [killing] at least 581 people.” Ammonium nitrate was the chemical responsible for several other industrial explosions, including the recent 2020 disaster in Beirut, Lebanon, a chemical explosion responsible for the deaths of 218 people that left an estimated 300,000 people without homes.

The Obama-era amendments to the Chemical Disaster Rule and RMP regulations were set to take effect in March 2017, backed by a chorus of complaints from manufacturing companies and right-wing politicians.

But, under the Trump EPA, the revisions to the RMP chugged to a slow halt in early 2017. Regulations set to take place in February were delayed until June, as Trump-nominated EPA Administrator Andrew Wheeler claimed that these regulations were “burdensome, costly, and unnecessary.” These RMP revisions created “regulatory burdens that … fell heavily on small and medium-sized energy businesses,” Wheeler said.

He also asserted that Trump-era recessions of these regulations would “remove redundant paperwork” while still “allowing companies the flexibility to satisfy leak-control requirements by complying with equivalent state rules.”

After a series of further delays in implementing the Obama-era RMP revisions that pushed back the publishing date into 2019, the EPA released a final ruling in December 2019 that rescinded most Obama-era revisions.

Due to the sweeping recessions made by Trump’s EPA, special safety practices and protections for handling ammonium nitrate were never added to RMP regulations.

On May 30, 2018, the EPA under the Trump administration released a proposed amendment delineating desired changes to RMP revisions. This plan proposed a recession of the following regulations: a requirement for a “root-cause analysis” after a disaster occurs (to determine the potential origin of a chemical disaster), a requirement of a third-party audit of industrial conditions that could’ve caused the accident, a requirement of the chemical facility to develop a plan for increasing workplace safety and reducing the risk of disaster, a minimum frequency of “field exercises” (tests of chemical facilities, procedures and measures to notify the public and emergency response agencies of potential risks), among several other provisions.

Although Wheeler asserted that despite the sweeping recessions his EPA conducted, “accident prevention is a top priority of the EPA, and this rule promotes improved communication between chemical facilities and emergency responders,” the Weaver Plant largely did not abide by NFPA 400 fire-code requirements. The Weaver plant did not even submit a required chemical inventory to the NC Department of Public Safety in 2020. Perhaps if they did, the Weaver plant would not have vastly underestimated their daily inventory of ammonium nitrate at 30-60 pounds when, in reality, nearly 600 tons of ammonium nitrate were at risk of igniting the evening of January 31, 2020.

In reality, the Weaver fertilizer plant did not follow several specifics of NFPA code; North Carolina Policy Watch reports that Weaver voluntarily chose not to abide by the distance requirements between the industrial facility and nearby residences, regulations to keep ammonium nitrate from being “molten” or “contaminated,” or NFPA guidelines to include sprinklers in the building that stored the ammonium nitrate. In fact, these ammonium-nitrate storage facilities were constructed out of wood, in accordance with North Carolina Fire Code. But, this construction was not considered a hazard, since these buildings abided by the Building Code at the Weaver Plant’s date of construction, which was in 1939.