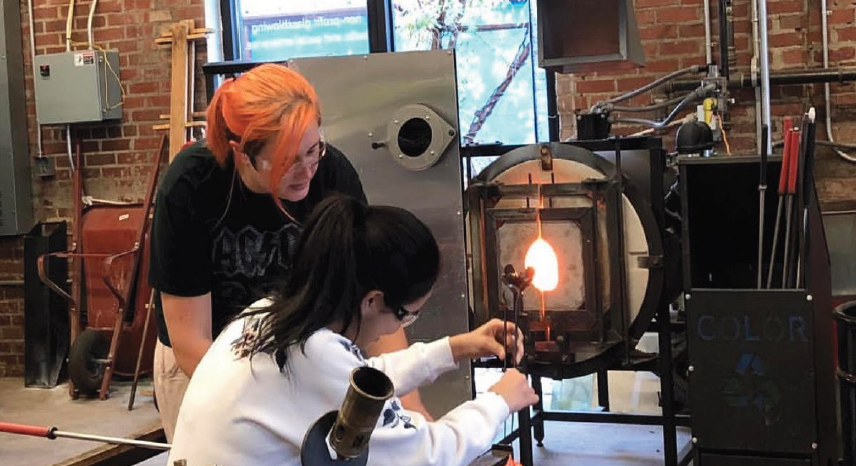 Courtesy of WFU Women in STEM

Members of WFU Women in STEM visit The Olio to make their own glass pieces as a bonding event for the organization.

Men outnumber women in STEM (Science, Technology, Engineering, and Mathematics) related careers, especially in fields such as computer science, engineering and architecture. This is a gap that WFU Women in STEM aims to diminish.

Nationally, men hold 73% of all STEM-related jobs, according to the United States Census Bureau in 2019. In 1970, that percentage was at a whopping 92%, so the diversity within STEM has significantly grown since, but there is still much to be done to create a more equal representation within the United States. On Wake Forest’s campus, males greatly outnumber females in the STEM field. For example, women make up about 32% of computer science and 20% of engineering degrees as of 2019, according to Wake Forest University News.

“Women’s efforts have been significantly undervalued in the STEM community. Women have a lot to bring to the table, they just need to have the space and resources to be empowered rather than be suppressed,” Vice President of Women in STEM and senior Emily Batts said.

In addition, the club actively involves the Wake Forest community in discussions of possible career paths and what it means to be a woman in such male-dominated fields. The club invites guest speakers to spread awareness to Wake Forest’s own community and beyond. For example, last spring the club hosted Dr. Rana el Kaliouby, a computer scientist and pioneer in technology, to discuss her book “Girl Decoded” — a memoir about her life as a Middle Eastern woman pursuing a heavily-male dominated career.

Notably, the club will be hosting a forum with President Susan Wente on April 11 in Winston Hall at 6:30 p.m. A panel will ask Wente questions about her career as a cell biologist and her groundbreaking research regarding nuclear pores.

As a leading biomedical scientist who worked extensively at Vanderbilt both in labs and within administrational before coming to Wake Forest, President Wente provides an example of female involvement and leadership within STEM to the Wake Forest community.

Many members of the club are displeased by the statistics surrounding gender gaps at Wake Forest and are working with leaders such as Wente to diminish the gaps.

Batts also noted how female professors within her own major of Biochemistry and Molecular Biology have inspired her personally.

“The professors here, specifically my female professors, aren’t afraid to share their STEM journeys to their students, which has really helped me find my way,” Batts said.

The organization believes that children require female role models within STEM careers, exposure to potential avenues of study and career awareness. With these methods, Women in STEM hopes to better empower young women to pursue STEM by fostering an underrepresented community through kinship.

Women in STEM also works to help provide a mentorship program that connects underclassmen to upperclassmen, hosts cookie socials for members of the clubs, holds annual guest speaker pop-ups and participates in campus-wide activities like Hit the Bricks and Project Pumpkin. They also work with the Office of Academic Advising to inform underclassmen about pre-health tracks and have even worked this past year with RAD to host a self-defense class for women.

Other members of Women in STEM noted the significance of such organizations that empower women in the workforce.

“The more women that enter the workforce regarse and talented workforce, aside from its inherent value, can help prevent biases in the products and services produced by these fields,” said sophomore Amy Taliaferro, another STEM member.

“It is important for women to feel they are able to have opportunities to work and thrive in these fields, and Women in STEM is helping to do that, in tangible ways, on Wake Forest’s campus.”