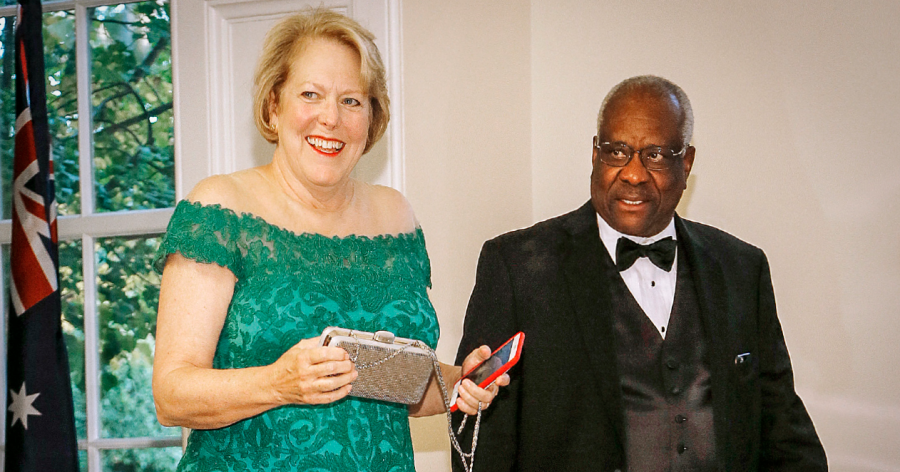 Virginia "Ginny" Thomas' conservative activism may have sway in Justice Clarence Thomas' decisions, threatening the sanctity of the Court as well as U.S. democracy as a whole.

Above its marble steps and through its towering columns, the Supreme Court’s nine justices wield tremendous power. Their role in judicial review is one of the pillars of the checks and balances system that cemented U.S. democracy as a “shining city on a hill”. However, there is reason for concern within this institution. One would be hard-pressed to say that the Court has not shown political bias in the past.

After all, the fact that its justices are chosen by the President and confirmed by the Senate ensures that some degree of polarization occurs, as presidents appoint and senates confirm justices with whom they share a considerable amount of common ground.

President Lyndon B. Johnson famously signed civil rights legislation into law, and at the same time, nominated Thurgood Marshall to the Supreme Court. Marshall became the first Black justice on the nation’s highest court. Years later, President Ronald Reagan served as a beacon of conservatism and nominated the right-leaning judge Antonin Scalia to the Supreme Court.

Nominations — and indeed the justices themselves — have been politicized in the past, but there has always appeared to be some layer of secrecy surrounding the partisan nature of the court. If justices were behaving politically, they did so in the shadows.

For some time, it has been the practice of the Supreme Court justices to refuse to make public political statements or engage in political behavior. Perhaps there is no way to see this more clearly than in the State of the Union Address. Members cloaked in their signature black robes remain seated in their front row positions as the president makes political statements that frequently receive standing applause from members of Congress and spectators. However, much of this current Supreme Court seems to be almost brazen in its political openness, which is deeply concerning.

Much of my quarrel with the Supreme Court rests with a single justice, Clarence Thomas. Thomas has served as an associate justice of the Supreme Court for more than 30 years, filling the seat vacated by Justice Marshall. Appointed by President George H.W. Bush, Thomas’ brand of legal thinking has always skewed to the conservative side.

The real issue surrounding Thomas cannot be gleaned from the surface, nor from just reading his opinions and dissents. Rather, one would have to pay close attention to whom Thomas shares his closest relationships.

Moreover, there are not many activists whose spouses have the authority to make decisions regarding the very ideas for which they are pushing. The crux of the issue is that Thomas has a responsibility to objectively mediate cases, and if there is any chance that his wife is persuading his judgment, the credibility of the Supreme Court would be shattered.

Virginia Thomas’ political engagement is a dangerous reality of this current court. The type of political activism that she is engaged in draws harsh criticisms from the left — the most frightening aspect being her involvement in efforts to keep former President Donald Trump in power.

In the months following the 2020 presidential election, Virginia Thomas was among those who pushed unfounded and false claims about the election being stolen from Trump. Additionally, she runs a conservative-minded political consulting firm that pushed heavily against the results of the 2020 election. Her involvement and close relationships with those involved in what some have dubbed the “Big Lie” are concerning.

Besides presenting a conflict of interest for Justice Thomas, having someone with these beliefs so close to a Supreme Court justice is dangerous. I may not have the highest opinion of the people who have pushed these lies, but as much as I dislike what they are saying, they have the right to say what they believe, just as I have the right to voice my opinions about them.

But there is an added level of danger to Virginia Thomas being involved in these circles. If Virginia Thomas clearly holds these questionable beliefs, why is it difficult to believe that her husband shares them as well? This issue presents another danger: a Supreme Court justice falling victim to conspiracy theories and lies peddled by a former president, disgraced lawyers and clumsy pillow salesmen.

Virginia Thomas recently revealed that she attended the infamous Jan. 6 rally in Washington D.C., but claims that she left well before the former president spoke and before the crowd erupted into chaos and violence. Her involvement in that rally should demonstrate the pervasiveness of the lies pushed by the Trump administration.

They are so pervasive that someone undoubtedly intelligent like Virginia Thomas is trapped by their falsehoods. Not only does her participation in such rallies and conspiracies against a legitimate election hurt her own reputation, but it also tears down the credibility of her husband and the Supreme Court as a whole.

Supreme Court justices are the nation’s foremost legal thinkers. They interpret the Constitution and play a pivotal role in the governance of the country. In good times and bad, Supreme Court justices have the responsibility to reasonably and clearly adjudicate the cases brought before them. Virginia Thomas’ closeness to the Supreme Court is nothing less than a powder keg a few feet from an open flame. Everything seems fine for now, but if things go the wrong way, the results will be catastrophic. In other words, if Justice Thomas finds himself making decisions on cases with the same sketchy judgment displayed by his wife, the future of democracy will be threatened.

In this highly polarized state of the current United States, democracy seems to be teetering on the edge of a steep precipice. The country can either slide further away from democracy or once again cement itself as a stable, reliable democracy.

In the coming months, the Supreme Court will likely be forced to hear cases that either directly or indirectly impact the state of our democracy. It is my sincere hope that Justice Thomas either shows resolve in his own judgment or sees reason and recuses himself because of the conflict of interest brought on by his wife.