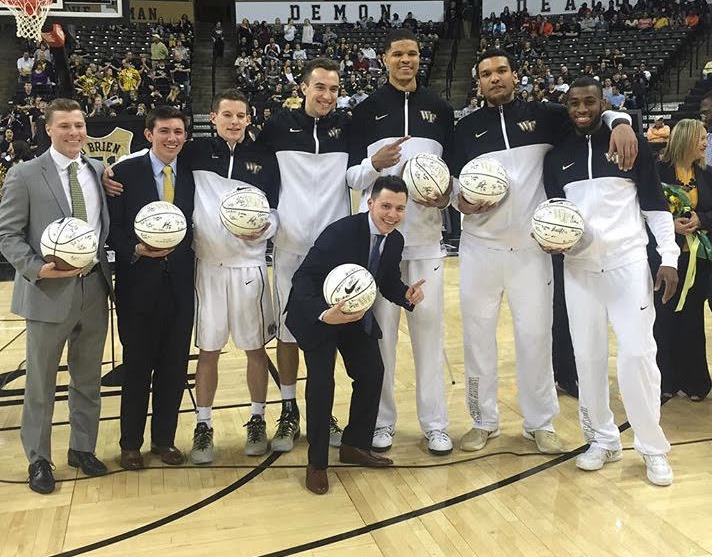 Codi Miller-McIntyre and Devin Thomas played in their final home game in a Wake Forest uniform against Virginia Tech this past weekend. Both student-athletes received standing ovations prior to the start of the game when they, along with the rest of the senior class, were honored with framed jerseys.

As much as I’m sure the team and the fans wanted to send off these two star players with a victory in their final home game, the Deacs were ultimately unable to knock of the Hokies. As a fan, it was impossible to watch the game unfold and not think of how Thomas and Miller-McIntyre were never able to experience success.

In so many ways, this final game was symbolic of their tenure at Wake Forest. The night began with such promise and hope, and by the time it was over you couldn’t help but have a sinking feeling in your stomach.

Day-in and day-out, game after game, Thomas and Miller-McIntyre gave their heart and soul to a Wake Forest program that they must have known was not as good as they were. They played with passion, grit, determination and fire every single time they stepped on the court — regardless of whether the team had just knocked off a top-ranked opponent or been run out of their own gym.

These two players never gave up. Did Thomas receive the occasional avoidable technical foul? Yes. Did Miller-McIntyre occasionally take an out-of-control shot on a fast break? Absolutely. But every decison and action they made on the court during their four years at Wake Forest was because they were passionate about making Wake Forest great and because they actually cared.

Miller-McIntyre and Thomas gave their all for the Wake Forest basketball program; regardless of wins and losses, they deserve to be remembered for that.

The actual game issues that have plagued the Deacs all season once again came to fruition. The Deacs suffered from mental lapses on defense as well as long scoring droughts and played nearly the entire game from behind.

On Tuesday night the Demon Deacons traveled to Durham to face off against the Duke Blue Devils. Duke has had a very tumoltous year, but they have begun to get things together in the last few weeks. Add that to the fact that the Deacs have not won in Cameron since Tim Duncan’s senior year and most people expected this game to be a blow out right from the start.

At the half the Deacs found themselves only trailing the ranked Blue Devils by one point, and went into the halftime intermission with all the momentum on their side.

In the second half, the Deacs came out with even more energy than they’d had in the first half.

The Deacs hit a few big shots and quickly found themselves up four points in the second half.

Wake Forest was hitting crazy shots and things were definitely usual to get weird as the game reached its pinnacle. Unfortunately for the Deacs, Duke made numerous hustle plays down the stretch of the ball game that ultimately allowed them to pull away from the Deacs.

On multiple occasions, the Deacs got a defensive stop, but were unable to grab the rebound, and Duke ultimately converted these second chance shots into big three pointers.

In a game where the Deacs put forward their best effort, they ultimately fell to the Blue Devils by eight points. This was just another close call for the Deacs in ACC play. The Deacs finished the regular season 2-16 in the ACC, and totalled 11 wins. This team was extremely inconsistent throughout the year, and did not live up to the expectations  that people had set for them. Ultimately, the 2016 season will be looked on as a major disappointment, but once one takes a step back and analyzes the season seperate from a win-loss record, bright spots can be found. The three freshman all shined at different points this season and will be major contributors moving forward.