"My goal every year is to compete for the ACC championship and then make the NCAA Tournament. After eight weeks in the summer, I knew we had a good team. I knew we could win some games." 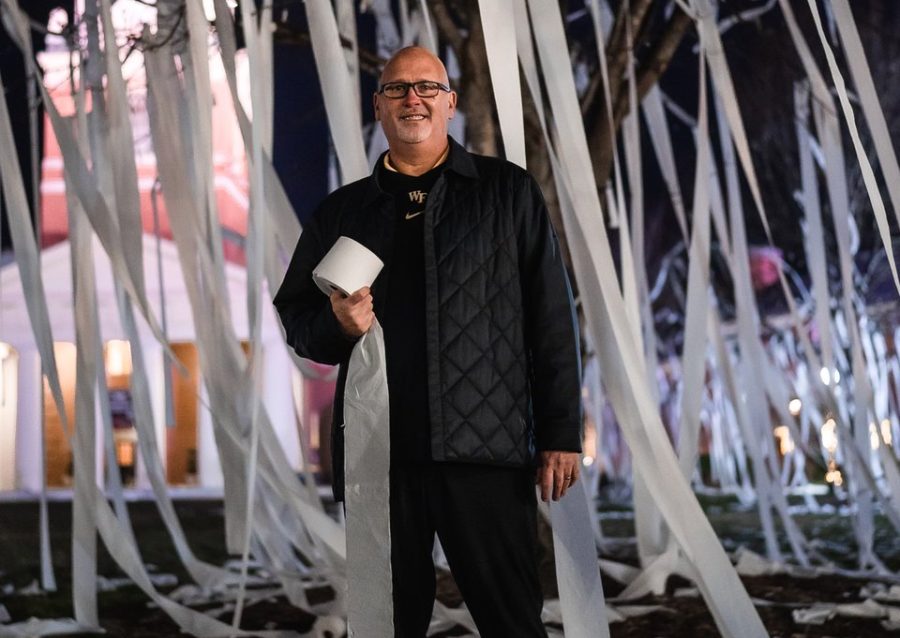 Steve Forbes helps roll the quad after a victory against UNC.

After a dismal 2020 season, Steve Forbes looked for a way to make the turn in year two. That began with a complete overhaul of the team. The team needed to “Get Right”, a phrase that is emblazoned on its practice and workout shirts.

The cast of characters was different, too. Many players left and new faces arrived.

“I believe that recruiting is like putting together a puzzle,” Forbes said. “I wasn’t very good at putting puzzles together when I was a kid. We had to look for some different pieces. We needed skill, we needed size on the perimeter and we needed scoring.”

Forbes continued: “It’s putting together a team that fits right. I think we did a really good job with that. Beauty is in the eye of the beholder. What I see in one player, somebody else [might not]. That doesn’t mean I’m always 100% right. But I have been doing this for a long time. We know what we are looking for, and we were able to go out there and get that done.”

When Forbes first mentioned the transfers, and the process of bringing them to his program, he referenced that he “misses on some”. This past year with Wake Forest, though, Forbes hit on every single recruit he brought to Winston-Salem. All five players have made an impact on the court, and three of them are starters.

Alondes Williams, a bench player at Oklahoma, is the crown jewel of these transfers. He transformed from a player that averaged 6.7 points per game with the Sooners to one who averaged 19.3 at Wake Forest. Add on his ACC-leading 5.3 assists per game, and surprise, he becomes the ACC Player of the Year, the first transfer to ever win the award.

Jake LaRavia, a transfer from Indiana State, became the second half of one of the best one-two punches in the NCAA. He averaged nearly 15 points per game for the Demon Deacons, the second most on the team. LaRavia was named Second-Team All-ACC.

Dallas Walton, the third and final transfer starting for Wake Forest, shined in the second half of the season. At 7-feet tall, he provided a massive presence in the paint, while also having the stretch ability to hit three-pointers at a 38% clip.

Lastly, Damari Montsanto and Khadim Sy added needed skills off the bench. Montsanto proved to be a threat from behind the three-point line and Sy was another stretch big man that received votes for the Sixth Man of the Year in the ACC. Both added extra dimensions to the Wake Forest offense.

With those impactful transfers, along with the skills of Isaiah Mucius and Daivien Williamson, Wake Forest rose from the ashes in Forbes’ second year. They “Got Right”. The Demon Deacons began their season 12-1, including a win away from home against a strong Virginia Tech team. But then, Wake Forest lost their next two ACC games against Louisville and Miami — games Forbes believed the team should have won.

Over the next seven ACC games, though, the Demon Deacons went 6-1, only losing to Duke. It was during this stretch that Forbes knew he might just have a special team. Beating North Carolina at home and Virginia on the road meant something to him.

“We’ve got a chance to be good,” Forbes remembers thinking at the time.

At the time, fans of the Demon Deacons were the only ones who saw the beauty of a home win over North Carolina. When Wake Forest defeated the Tar Heels by 22 points, it verified the team’s ability to win big games, but many still saw it as a false flag. In his first year as the head coach, Hubert Davis had North Carolina at a 4-3 record in the ACC, far below expectations in Chapel Hill. Now, that win seems like Wake Forest’s biggest calling card of the year. Many within the North Carolina program have stated that the Wake Forest loss is what charged the rest of their season, one that saw them make the NCAA Championship Game.

Then, after several more wins, Wake Forest faltered at home to Miami in a game that, once again, it should have won. The Demon Deacons followed that up with a close loss in Cameron Indoor, a game that they nearly won on a buzzer-beater.

Even against Duke, losing wasn’t an option to Forbes.

“I’m not satisfied [leaving] here with a loss,” he said at the postgame press conference.

After that loss, though, Wake Forest responded, winning three of their final four games, the lone loss a stumble on the road at Clemson. With that, Forbes achieved one of his goals for the season — Top 5 in the ACC. Wake Forest slid in as the No. 5 seed leading into the ACC Tournament.

Being a good basketball team in the ACC, like football, comes with its own favors. With Wake Forest’s success on the court, the team saw their highest single-season student body attendance since 2007.

Another goal — a more personal goal — was achieved by Forbes in the beginning of March. Despite the perception that Mike Krzyzewski may have been given the award as a final curtain call, Forbes was named the ACC Coach of the Year. The first person he thought of when speaking on “Packer and Durham” following the announcement — his dad.

“My dad passed away three years ago on March 20,” Forbes said with tears forming in his eyes, alluding to the passing of Wes Durham’s father. “I can promise you that if your dad doesn’t know my dad, he does today, because my dad is the proudest person in heaven.”

Forbes then took a beat, almost for the first time recognizing the gravity of this award. The list that he is now on.

There was a significant buzz surrounding the Demon Deacons when they traveled to Brooklyn for the ACC Tournament. Not only did they enter as a team that was bound to make the NCAA Tournament, but also as a team that had a strong path to surprise the conference and win the ACC crown.

To many, Boston College — Wake Forest’s first opponent in the ACC Tournament — was seen as a small obstacle. The Demon Deacons defeated the Eagles by 30 points in January. It was Miami, who Wake Forest would presumably see in the quarterfinals, that was the true fear.

That unease regarding a rematch with the Hurricanes disappeared on Day Two of the ACC Tournament. Boston College made sure of that. The Eagles came out shooting hot and within three and a half minutes, they led by eight. Of course, Wake Forest would not bow out of the tournament like this. They would fight, and they did, all the way to a one-point deficit at halftime. In the second half, it was much of the same.

With the score tied, the Demon Deacons had the ball and a chance to win. It was exactly how you would draw it up — Alondes Williams with the ball, the clock counting down towards a final shot. And then things changed. A charging foul on Williams took the possession away, leaving overtime to decide the fate of Wake Forest’s season.

That overtime moved as slowly, but also as quickly, as a game ever had. Wake Forest never had a shot. Boston College couldn’t miss. Within just a minute, it was clear that this game was not the Demon Deacons’ to be won. The rest of the overtime period was as if you were watching a train wreck in slow motion. And then, the buzzer sounded. It was over. The fear of what was waiting ahead — Miami — turned into fear over whether a team that had been so incredibly special would even have a shot at the NCAA Tournament. For Wake Forest, it turned into a waiting game, but Forbes felt comfortable with where the Demon Deacons stood.

“We were safely in the tournament according to an expert on Wednesday, hadn’t played one game, and were almost out of the tournament before we played today,” Forbes said after the Boston College game. “I don’t understand how we can be penalized like that, but I guess we can. I don’t think there are 68 teams better than us, but we’re about to find out.”

When so many things had seemed to have gone Wake Forest’s way during the season, the bubble was one aspect that went entirely counter to the Demon Deacons’ wishes. Every day, there was a list of who Wake Forest would want to win, and every day, that team lost. It was painful, watching the Demon Deacons slowly slip away from the glory that had once seemed an inevitability, a prophecy.

On Selection Sunday, as many expected, Wake Forest’s name was not called. But still, the Demon Deacons were ahead of schedule. The NCAA Tournament was not a preseason expectation for those outside of the building. Success in the NIT would be beyond what anyone thought was possible.

For a while, Wake Forest looked like its old self. There was a 10-point first-round victory over Towson, then a win against VCU to send the team to the Elite Eight. But when it came to the quarterfinals against Texas A&M, Wake Forest fell back to the team that it was at its worst. It felt like the ACC Tournament, the game at Clemson or worse. The team shot under 15% in the first half. There was no way back, and for the second time, the Demon Deacons’ season felt over. This time around, it truly was.