“I'm not sure people believed [these program’s succeeding] could happen. It's really Wake Forest having the right leaders to capitalize on the right strengths of Wake Forest to achieve success. -John Currie 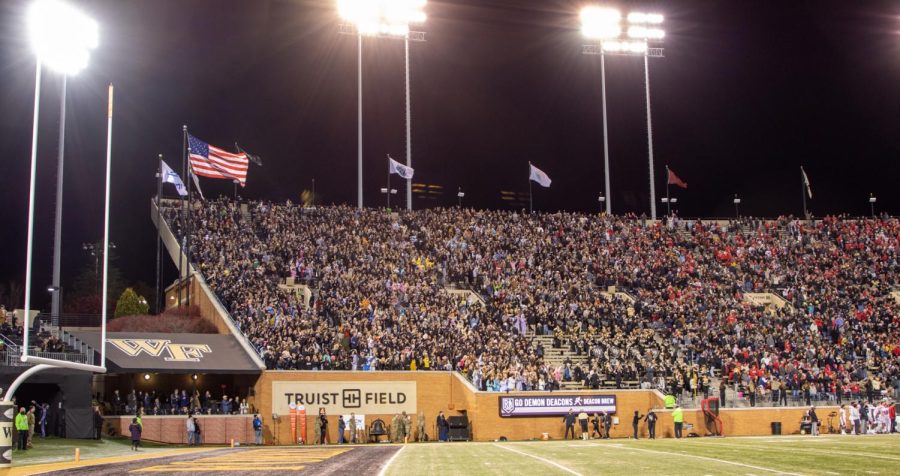 The nearly 90% of undergraduate students who attended a Wake Forest football game against NC State is the highest in program history.

When I interviewed both Forbes and Clawson, I was intrigued by the amount of history that surrounded them. But for each coach, it was different. For Clawson, there was memorabilia from Wake Forest’s bowl games, his team’s successes, along with the name tag from Cooker, a reminder of one of the tougher times in his life. For Forbes, there were pictures of his predecessors — Dave Odom and Skip Prosser — a reminder of all that was done before him and all that was given to Wake Forest.

These historical objects in the individual coaches’ offices serve as memories of their journeys and all that predates them at Wake Forest. For Forbes and Clawson, in 30 years, theirs will be the faces in the pictures and memories sitting in the offices they once occupied. Coaches will look at their pictures, their trophies, and reflect on the impact they had on their programs, just like Forbes and Clawson do now. No school has had their men’s basketball and football coaches win the ACC Coach of the Year in the same year since 2004. Forbes and Clawson changed that. They have made history in a year where these programs – and Wake Forest’s student body – could not have needed it more.

And the future looks bright, too. To Wake Forest Athletic Director John Currie, that’s because his coaches are competitive.

“One of my favorite comments [Wake Forest] President [Susan] Wente said since she arrived here was when she said, ‘Wake Forest people are highly competitive,’” Currie commented. “I love that. I think our people are highly competitive and we expect to achieve excellence across the board whether it’s in an academic department, or whether it’s in athletics.”

Currie was also quick to reference the success of other teams on campus, and how that has impacted the desire to see success in basketball and football. Men’s tennis won a national championship in 2018, men’s soccer is consistently an NCAA Tournament team and men’s and women’s golf are among the best in the country. Nearly every team at Wake Forest has seen growth and success in the past year.

“Both programs have responded to the fact that we have really good programs at Wake Forest,” Currie said. “If you’re Coach Forbes or Coach Clawson, you can point to these other elite sports and say we can be just like this at Wake Forest. So really across the board, you can see the proverbial rising tide lifting all ships.”

This year, with all the success from teams around them, Forbes and Clawson have done something special. They have changed the game for their individual programs. They have revived them. But none of them take the credit for it.

“It’s a collaborative effort,” Forbes said. “It’s not just me. Everybody has to be on the same page. It starts with Currie, Wente and Hatch. They wanted basketball to have success. You need that commitment from your administrators to even have a chance.”

“I think we have hired the right coaches and recruited the right people,” he said. “It’s as simple as that. You’re only as good as the people in the building with you. I have an outstanding staff who values relationships and cares about the players in ways other than football. To me, that’s what makes Wake Forest football special.”

And while both Forbes and Clawson are complimentary of the people around them, whether it’s the athletes, administrators or other coaches, they are the conductors of the train. They are the driving force behind all the positive changes. They are the key to fan engagement — students now coming to games and staying. They hold the reigns of football and men’s basketball at Wake Forest, and they have put the school back on the map.

And that’s just the beginning. Next season, football will look to return to the ACC Championship and, this time, return with the trophy. Men’s basketball will have hopes of a first shot at the NCAA Tournament in the Forbes era.

It’s the renaissance of Wake Forest men’s basketball and football. In one year, Forbes and Clawson have done it, together. Two programs, two amazing seasons and two ACC Coaches of the Year. Now, Wake Forest can sit back, smile and enjoy. It’s the good old times in DEACTOWN.

And, hey, Wake Forest baseball started the season 11-0 for the first time in nearly 70 years, but that’s certainly for another story.