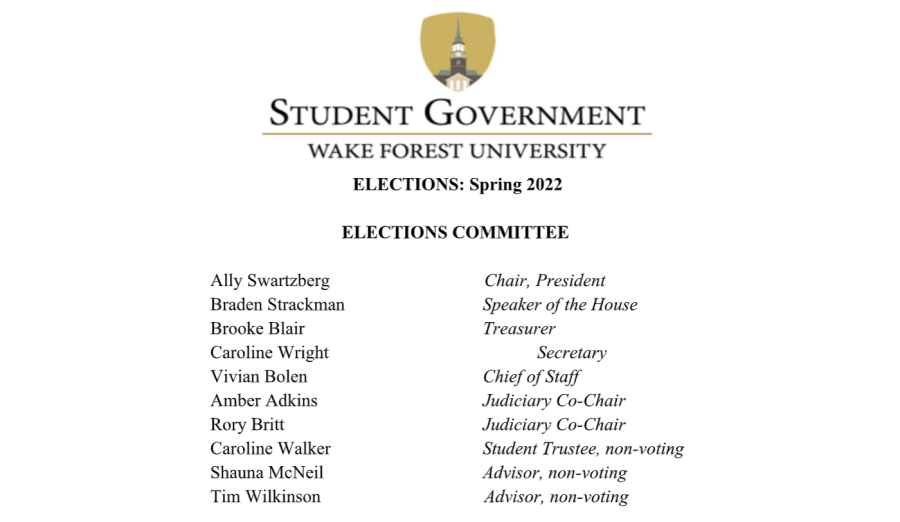 Wearner writes in his appeal that the committee's actions led to the defamation of his character.

Former candidate for student body president, Ethan Wearner, filed an appeal last week alleging that the Student Government Elections Committee compromised his candidacy on the day of the election by making allegations against him that he had no opportunity to defend.

Wearner also wrote in his appeal that the Old Gold & Black compromised the election and defamed his character when it published those allegations from the Elections Committee in the form of a letter to the editor.

“This was an abhorrent violation of my rights as a member of Student Government and as a student on this campus,” Wearner wrote in his appeal. “I have the right to review the evidence presented against me and to address the accusations of the accuser. I was denied any semblance of legitimate participation in this process.”

Less than three hours before the polls opened on March 22, the day of the election, the Student Government Elections Committee — which is composed of Student Government leaders and advisors from the Office of the Dean of Students — sent a letter to the editor to the Old Gold & Black claiming that Wearner’s campaign platform materials inaccurately represented his credentials and experiences.

Wearner filed an official appeal with the Elections Committee, referred to as “An Appeal to Address a Violation of Rights and Defamation of Character”, at 5:30 a.m. on Wed. March 23, while the polls were still open, which was obtained by the Old Gold & Black.

“As a result of this committee’s failure to respect my rights as a student, I was falsely branded a ‘liar’ on the front page of the Old Gold & Black [website],” the appeal states. “Your letter was placed on the front page of the newspaper, and it blew up like wildfire. By the time I could even comprehend what had happened, the election had lost all sense of legitimacy and integrity. My character has been repeatedly attacked thanks to efforts initiated by this committee.”

According to the Student Government Elections Packet (Page 7, Section 6), if a candidate feels as if they have been treated unfairly by the Elections Committee, a candidate may appeal an imposed sanction within 24 hours of polls opening or reaching the Class 3 violation level. Additionally, this section says that the right to appeal expires 24 hours after the candidate is notified of the Election Committee’s decision.

Wearner says he submitted an appeal in this time frame.

“I submitted an oral appeal at around 1:15 p.m. on Tues., [March 22], and submitted a formal, written appeal at 5:30 a.m. on Wednesday morning,” Wearner told the Old Gold & Black. “Polls would close approximately seven hours after the written appeal had been filed.”

The election results were published, and Wearner says he has yet to receive a response from the Elections Committee.

“I was not contacted or informed, in any way, about the charges used in the March 22 sanctions decision,” Wearner said.

Chairwoman of the Elections Committee and Student Body President Ally Swartzberg was not immediately available for comment.

The subsequent action the statement refers to is the Old Gold & Black’s publication of the letter to the editor.

“I was never allowed to review the letter sent to the Old Gold & Black or address any of the accusations or evidence contained in the March 22 email,” Wearner told the Old Gold & Black. “In summation, the committee found me responsible for charges they had not previously accused me of using ‘evidence’ that I was unable to review or address.”

The letter was originally published with the subheading: “Elections committee writes to the Old Gold & Black to correct campaign lies by Ethan Wearner”. Within hours of receiving a complaint from Wearner, the subheading was edited and the word “lies” was replaced with “inaccuracies”.

“Wearner expressed to us that the word ‘lies’ mischaracterized him and his actions,” McNeely said. “He believed that the actions of which the Elections Committee are writing have no intentionality behind them and believed that our coverage had portrayed him negatively.”

He continued: “We recognize that there was a more fair decision that could have been made, and we made that decision in quick succession after the article was published,” McNeely said. “We changed the subheading to more accurately reflect both the letter to the editor and the actions of [Wearner].”

The appeal also detailed a conversation Wearner had with McNeely in which McNeely explained the motive behind including the word “lies” in the subheading.

“After speaking with the Editor-in-Chief of the Old Gold & Black, Connor McNeely, he informed me that the decision to call me a liar was based on the language sent in by THIS committee,” the appeal states. “Whether or not this committee explicitly told the Old Gold & Black to cast me as a liar is irrelevant. The message from Connor was clear — he believed the title appropriate based on the language [the committee] sent to him.”

The Old Gold & Black editorial board made the decision to take down the letter to the editor from its website on March 24.

“In the interest of being as neutral, objective and fair as possible to all parties involved we decided to take the letter down and provide an update with more context to inform the reader and more adequately provide more balanced coverage,” McNeely said.

“We would reiterate that it is our job to provide fair and balanced coverage,” Pierre said. “We thought the decision we made would most accurately and rapidly inform Wake Forest student body voters. With the benefit of hindsight, there might have been a clearer path.”

She continued: “We also, as Connor wrote in his letter from the editor, condemn — in the strongest terms — the reaction of the student body on Yik Yak to either the [Student Government] Instagram post or our coverage. We were watching on Tuesday pretty disgusted with the student body in general.”

In his appeal statement, Wearner makes it clear that he finds the Elections Committee’s actions “reckless” and “irresponsible.”

“The reckless actions initiated by this committee resulted in the publication of a defamatory hit piece hours before polls opened….this is not the Student Government I know,” the appeal states. “I can admit to a dated reference on a webpage, but what I cannot accept is the treatment of this committee, the student newspaper and the campus community.”

Update April 2, 2022: This story was updated with new edits focused on clarity.