Will Smith defends Jada Pinkett Smith at the Oscars 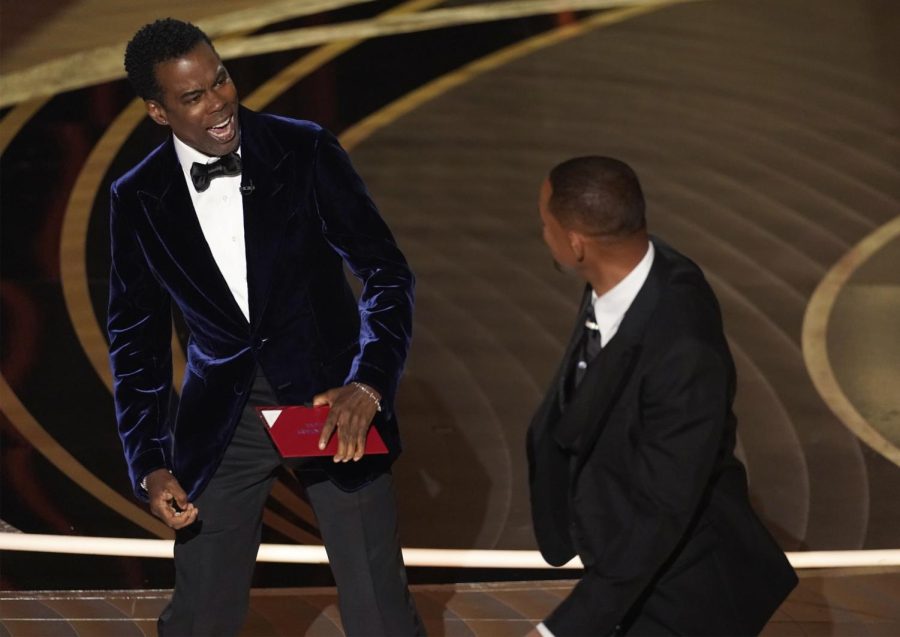 This past Sunday, the 94th Academy Awards took place. Chris Rock was telling jokes about actor Javier Bardem (“No Country For Old Men”) and his wife, Penelope Cruz, when he then addressed Will Smith’s wife Jada Pinkett Smith, telling her that he was looking forward to “G.I. Jane 2”. This was a reference to the 1997 film “G.I. Jane”, where the main character was a bald woman played by actress Demi Moore. The audience reaction was mostly positive, with the camera cutting to Will Smith laughing and Jada Smith rolling her eyes.

The camera then returned to Rock, who heard some of the half-groans from the audience confirming that it was a good joke. Suddenly, Will Smith walked onto the stage and slapped Rock, leaving the audience divided on whether or not the entire incident was staged. As Rock continued talking in the aftermath, Will Smith was heard saying, “Keep my wife’s name out of your [expletive] mouth.”

Rock was curious as to whether Will Smith was serious or not. The audience fell silent as the camera panned to Will Smith saying “yes” before repeating himself. Noticeably surprised and taken aback, Rock then moved on with his act, calling it “the greatest night in television history.”

At first, this seems like an overreaction on Will Smith’s part in response to a joke by a comedian. After all, the job of a comedian is to provide comedy for their audience. While first reactions are not wrong, they are often incomplete — there is an intense history that many are failing to consider.

To contextualize the joke itself, Jada Smith sports a shaven head, but it’s not a style choice; she shaved off her hair after being diagnosed with alopecia, a condition that results in hair loss. In a world where Jada Smith did not have this condition and it was merely a fashion statement, then Will Smith would be in the wrong. But in this world, Jada Smith has that condition, and Rock made a joke about it. Billie Eilish was there with her brother Finneas; Eilish has Tourette’s Syndrome, a condition where one has involuntary tics. Imagine a scenario where a comedian makes a joke about that; there would be outrage at the comedian.

When it comes to Will and Jada Smith’s marriage, this is the fairest assertion that Rock merely made a joke. It is well known that Jada Smith was involved in an affair with singer August Alsina, as well as that their marriage could possibly be defined as “open.” While many of us may have our own personal views on open marriage, that is beside the point and ultimately not for the general public to discuss, especially if Will and Jada Smith have talked about settling these boundaries in their relationship. Morally, Jada may not be the greatest person, but that doesn’t mean that she deserved the comment from Rock.

As for Will Smith himself, he was defending his wife. He admitted in his book that his dad abused his mom, and he felt guilty for not standing up for her. Additionally, since Jada Smith’s affair with August has been public, both Will and Jada Smith have been the butt of countless jokes. The entire time, we have not truly heard Will Smith’s perspective — he has remained mostly composed.

That night, Will Smith was nominated for what would become his first Oscar win for “King Richard”, where he plays a father that Will Smith described as being “a fierce defender of his family” in his acceptance speech. With his family history, his decorum during the public’s reaction to Jada Smith’s affair and a role that invoked strong emotions from within, Will Smith carried this inner frustration and pain into an exceptionally emotional night. Thus, in an effort to defend his wife, he inadvertently created one of the most memorable moments in television history. Will Smith could have verbalized his disagreement with the joke. He could have talked to Rock about it later. That would happen in a perfect world, but we live in a flawed world. We cannot expect a person to act like anything above a human being. We understand logic and reason, but our nature pushes us towards emotion. If one was in Will Smith’s shoes, with his family history and marriage history, sitting in the audience during an emotional night while a fellow comedian was insulting his wife, it’s difficult to say that in the same circumstances, one would genuinely respond differently.

Throughout his career, Will Smith has kept a cool composure regarding incidents close to him. Some critics of the event argue that he is “encouraging violence,” suddenly forgetting over 30 years of him never doing something like this. If this was the case, he wouldn’t have the stardom he has today. It costs $50 million just to have him in a movie. Many also don’t remember that Rock divorced his wife partially due to infidelity on his own part; he is no saint.

Will Smith won his Oscar for playing Richard Williams, a father who defended his family. After the incident last night, there likely wasn’t much acting involved. Will Smith was merely being a father defending his family, and a husband defending his wife. He is a human that was in very human circumstances. Will Smith and Rock will likely reconcile in the coming weeks, and their careers will likely not suffer, but last night’s Oscars is a live example of our imperfect nature.