Baseball goes 1-2 in series with Virginia

After facing the now No. 3 Cavaliers, the Demon Deacons await a series with unranked Boston College 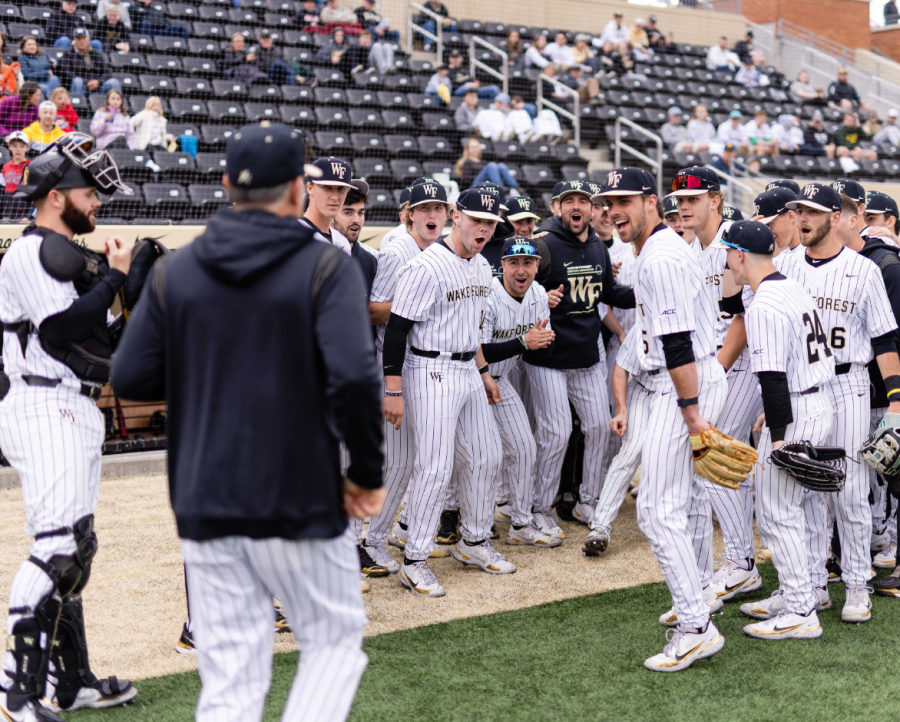 Following a highly successful weekend in Atlanta and a strong mid-week showing against Liberty, Wake Forest won one game in a three-game series with Virginia. The Cavaliers, as of Monday, are ranked as high as No. 3 in the country, highlighting the importance of winning even one game for the Demon Deacons.

In the series opener on Friday, an 8-2 loss, Wake Forest struggled both on the mound and at the plate. Sophomore starting pitcher Rhett Lowder lost his first game of the season, giving up seven runs, three earned, in 5.2 innings. At the plate, the Demon Deacons only got four hits, and no player had a multi-hit performance.

On Saturday, an 8-0 shutout, pitching remained an issue for Wake Forest, and the bats were even worse. The Demon Deacons only secured one hit in the game. Freshman Josh Hartle earned his third straight loss, giving up six runs in six innings.

To close the series on Sunday, Wake Forest finally turned it around, plating eight runs and only allowing one in the victory. Following a one-run performance by sophomore starting pitcher Teddy McGraw, the Demon Deacons’ bullpen closed the door in the final four innings.

For the first two innings on Friday, Lowder performed well for the Demon Deacons, going three-up, three-down in the first inning and then striking out two hitters in the second. But, in the third inning, the Cavaliers finally broke the game open. After allowing two baserunners, a play involving a wild pitch and then a pitching error saw Virginia take a 2-0 lead.

In the top of the fourth inning, a solo home run extended the Cavaliers’ lead to three, but in the bottom of the inning, Wake Forest made their move to get back into the game. With redshirt junior Michael Turconi and sophomore Brock Wilken on base, a sacrifice bunt by redshirt sophomore Adam Cecere moved the baserunners forward to second and third base. A single to center field by redshirt junior Brendan Tinsman brought them home, shrinking Wake Forest’s deficit to one run.

The score remained 3-2 until the top of the sixth inning, when the Cavaliers knocked in four runs while also knocking out Lowder. After two walks to open the inning, a single to center field brought the runners in for two runs. Later in the inning, an infield hit extended Virginia’s lead to 6-2. After a third walk in the inning, Lowder was replaced by graduate pitcher Gabe Golub. Golub immediately balked on his first batter, and then allowed a single to bring in the baserunner. A strikeout finally got Wake Forest out of the inning despite trailing 7-2.

In the ninth inning, Virginia added a final run and the Demon Deacons could not mount any form of counter-attack in their final at-bats, giving the Cavaliers the 8-2 victory to open the series.

“Virginia is a good team,” Walter said following the series opener. “They did some good things today, but we need to play clean baseball if we’re going to beat good teams.”

Hartle started strong in the first inning against Virginia on Saturday, getting three straight outs in the first inning. After that, not much else went right for Wake Forest. With a runner on third base in the second inning, a sacrifice fly scored the first run of the game for the Cavaliers, Hartle was able to exit the inning with only that run allowed.

The 1-0 Virginia lead remained until the fourth inning, where a two-run home run extended the lead to 3-0. Then, a three-run home run in the fifth inning doubled the Cavaliers’ lead. In the top of the eighth inning, Virginia added their final two runs of the game, extending their lead to 8-0.

In the bottom of the ninth, the Cavaliers were one out away from a team no-hitter until freshman Tommy Hawke knocked a single to center field. The next batter, freshman Nick Kurtz, grounded out to end the game.

Despite the nature of the loss, Walter was quick to back his team leading into their final game against Virginia.

“We’ve got to find a way to come out and win tomorrow,” Walter said. “I still like our club. I don’t like our club any less today than I did two days ago. This is a good ball club and I have no doubt we will come out tomorrow ready to play.”

To begin the series-ending game on Sunday, McGraw worked around two walks to get the Demon Deacons out of the first inning unscathed. He was rewarded by a Cecere single in the following half-inning, bringing in redshirt sophomore Pierce Bennett and Kurtz to give Wake Forest an early 2-0 lead.

In the top of the second inning, Virginia responded with a solo home run with their first batter, but that was their only score of the inning. Wilken walked to begin the bottom of the third inning and Cecere was hit by a pitch. Those two baserunners proved to be detrimental for the Cavaliers, as the next batter, Tinsman, hit a three-run home run, extending Wake Forest’s lead to 5-1.

In their next inning at bat, the Demon Deacons added on to the lead. Cecere hit a solo home run with two outs, and sophomore Jake Reinisch hit a double, bringing home Tinsman two batters later.

The score remained set at 7-1 until the bottom of the seventh inning. Kurtz singled to right field and then advanced to second on a wild pitch. From there, Bennett drove him in with a double to left field. Wake Forest pitcher Camden Minacci then closed the game out in the final two innings, only giving up one hit, securing the 8-1 victory for the Demon Deacons.

After the game, Walter reflected on his post-game comments the previous evening, while still finding need for improvement with his team.

The Demon Deacons now stand at 18-6 on the season with a 4-5 record in the ACC, good for fourth place in the Atlantic division. After facing incredibly stiff competition over the past two weeks, Wake Forest will have a chance to face an unranked opponent, Boston College, in their weekend series. The Eagles are 1-8 in conference play.