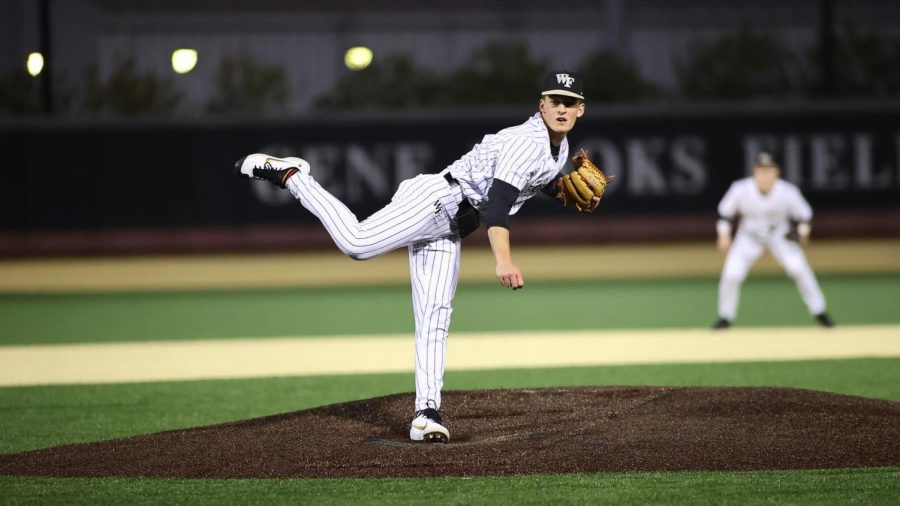 The baseball team begins a three-game series against Boston College on Friday.

Redshirt sophomore Eric Adler already has an impressive resumé and a bright future ahead of him. The Rockledge, Florida native was rated as a top-500 prospect by Perfect Game. In his senior year of high school, Adler struck out 135 batters in 63 innings, posted a 1.44 ERA and hit .400.

The relief pitcher received three accolades in 2021: Collegiate Baseball Freshman All-American, All-ACC Academic Team and NCBWA Stopper of the Year Award Midseason Watch List. Most recently, Adler was named as a 2022 Baseball America Preseason Third Team All-American. If Adler continues on this path of success, his aspirations of playing in the MLB will likely come to fruition.

Christina DeNovio: What other sports did you play growing up? What made you choose baseball?

Eric Adler: I played basketball and football. I was actually more of a football player than a baseball player at first because my family was all oriented around football. Then, I noticed that I had a strong arm in the outfield, and I kind of had a knack for baseball. I enjoyed it more than my brothers did. I actually ended up breaking my arm in high school, and that kind of made me lean towards baseball.

CD: How did you get into pitching? What made you want to stick with that rather than playing in the field?

EA: I came here as a two-way player — I was playing the field and pitching. I’ve always known that in the long run, my future is on the mound, but I still enjoy playing the field. I decided to develop on the mound and see how far I could take my pitching, and I haven’t regretted it since.

CD: Why did you pick Wake Forest over other offers?

EA: I liked Wake Forest because it’s the most well rounded, given the academics, coaching facilities, teammates, all that sort of stuff. Having a head coach like Tom Walter, it’s more of like a 40-year commitment, not a four-year commitment because he’s got your back post-baseball, and he’s gonna look out for you. He tries to develop you as a man instead of just a baseball player, and I thought that was really important.

CD: Can you talk more about your relationships with your coaches?

EA: Walt’s kind of like a father figure, I would say. He puts so much work in behind the scenes that we don’t know about to make our experience the best that it can be. And on the field, too, he really cares for us. He’s really emotional in the games, and we can see how much he puts on the line for us. Especially this year, he’s poured so much into us, and it’s really paying off already. We’ve been playing real well, so we can keep going because of him.

CD: What were the biggest changes from high school to college baseball?

EA: Definitely getting used to the workload of it was an adjustment. Apart from when you’re playing summer ball, we are on the field constantly. It’s not a bad thing, but your body does get fatigued over time. But, having the staff that we have makes it so much more enjoyable. You know, if we didn’t have [Associate Head Athletic Trainer] Jeff Strahm or [Assistant Director] Mark Seaver, and all of our pitching coaches and city coaches, it really would be a different scenario.

CD: The baseball team has been dominant this season. Why do you think the performance has been so strong?

EA: I think the reason we’re playing so well is because this team has bonded a lot better than in years past. There’s no age on the team — you’re not seen as a freshman, you’re not seen as a senior, but instead as a teammate. I feel like in the years past, that wasn’t the case. We really play for each other — that’s the best way to play baseball. If you’re trying to play for yourself or play for the draft, you’re not going to do well and the team is going to suffer. For example, say somebody gets out. There’s two outs, so that guy at bat is going to try extra hard to pick him up. I think that’s part of the reason we’ve been so successful.

CD: What’s your favorite activity to do with your teammates that’s not playing baseball?

EA: I think my favorite activity is probably playing pool. I used to be terrible at pool, but over time, we’ve just played it so much. I’m getting better at it. We also have two cornhole boards in our locker room, and we actually have a tournament going on right now. I’ve never played more cornhole in my life.

CD: Are there any teams you’re looking forward to playing in particular?

EA: I’m looking forward to playing in Louisville — two of my really good friends are on that team. I’m also looking forward to going up to Boston to play Boston College — I think that’s going to be really fun. I’ve never been there, but I hear it’s a really pretty city. And then hopefully, playing a team like Vanderbilt or a team in Omaha. I feel like that’d be awesome — playing and hopefully beating them.

CD: The baseball season is very long and has a high volume of games. How do you keep your body and mind sharp throughout the four months?

EA: We work a lot with what we call staying neutral. That’s just understanding that baseball is a mix of highs and lows, and you can’t grab onto the highs and lows too much because that’s when you suffer. So what staying neutral means is just understanding that your successes and your shortcomings are all part of the game. That’s more of the emotional aspect of it. And then, with the body, you just have to find what works for you. I meditate a little bit in the mornings, and I do a bunch of yoga and stuff like that at the field. It’s like a second form of meditation — it just kind of clears my mind as I’m stretching my body. Meditation is just a side effect of it. That’s what works for me. But I know guys will do breathing exercises like box breathing and all these different methods. It’s really individualized, but it’s about what works for you.

CD: What are the most important things you’ve learned so far in your time at Wake Forest?

EA: The main things I would say are time management and how to deal with failures. I think the biggest part is how to deal with failures. It goes along with staying neutral. Given that baseball is a failure-oriented sport, it’s important to be able to understand your emotion when you fail and you come up short. You put so much time and effort into it. That’s what’s gonna make you better in the long run. It makes you understand what you need to put into it to better yourself for future games or whatever lies ahead. It’s just really not grabbing onto past failures because I’ve seen players that will grab onto that and it just kind of spirals. Then, there are the guys who don’t really think about it. And you could say that they’re dumb or whatever, but they tend to be the better players. So it’s just kind of finding that fine line between focus and overthinking.

EA: I always think about my parents, especially my dad, because of the sacrifices he’s made. When I’m on the mound, I’m not thinking about anything but the game, but when I put the work in off the field and before practice, I have him in mind. I just want to make him happy because of everything he’s put into me. I also think of my brothers. My oldest brother played football. He always says he didn’t have the mental capacity for baseball, so he stopped playing when he was really young. And then John, my middle brother, played football and lacrosse and never really got into baseball. My dad was always happy that I was just playing sports — he never really cared what sport I played or which one I would take seriously. He always wanted me to be active, and that’s why I play multiple sports. He played football in college, but his brother played baseball at college, both at Missouri. He understands how much of a grind baseball is and what it takes to play baseball. And he thought that it would be a great route for me and supported me through that.

CD: Do you have a favorite baseball player?

EA: I think my favorite player is Mike Trout. He’s probably the best player of all time. My favorite pitcher is Jack Flaherty, who plays for the St. Louis Cardinals. I think he and I are very similar, all the way down to the mental game of baseball. We throw and carry ourselves very similarly. He’s a very successful pitcher.

CD: What’s your major, and what are your post-graduation plans?

EA: I’m a Communication major. I want to play professional ball and try to make it to the big league. If that doesn’t work out, I want to do some form of medical sales. My dad’s a radiologist, and then my brother’s a physical therapist. My other brother is working to be an orthopedic surgeon right now. They’ve been around the medical field, but what they’re doing is not really for me. I think some of my strengths are talking to people and creating relationships. The field of sales is based on your own personal success and like getting deals done. In the medical field, there’s so much opportunity to make solid money — and money’s not everything, but it does help. I think that would be fun because it can end up being on your own time. When you start out, you have to work for somebody, but later on you can work remotely and have more independence.