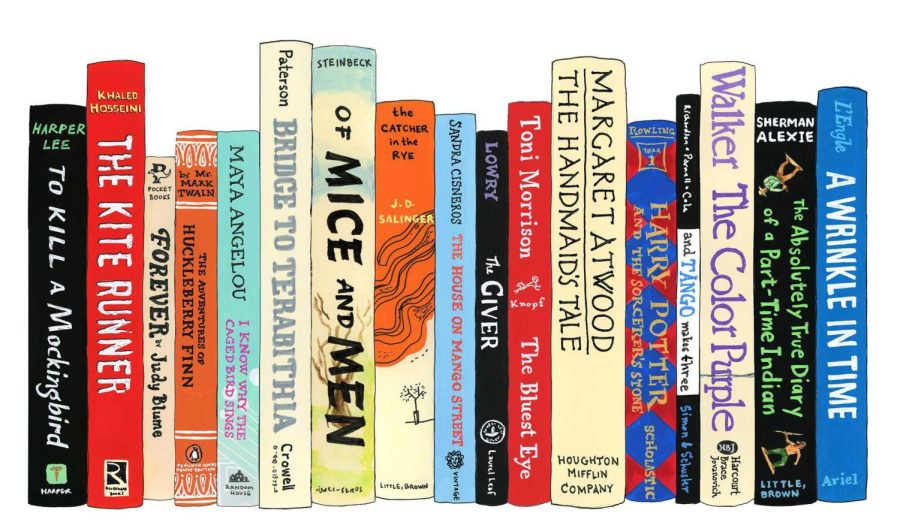 Banning books betrays a fear of open exchange of ideas.

“It was a pleasure to burn,” Ray Bradbury wrote in the opening line of “Fahrenheit 451”. Bradbury’s novel — a book about banning books — is finding itself on an ever-growing list of commonly banned books in school districts across the country. It was banned in 2006 in Montgomery County, Texas. Book banning has been a growing phenomenon for the past few years targeting books that — in the opinion of some — are unsuitable for students.

“Fahrenheit 451” is not the only book in its gradual decline from prominence in school curricula — many other notable works are facing the same fate. Famous works like “To Kill A Mockingbird” by Harper Lee and Toni Morrison’s “The Bluest Eye” are also in danger of being pulled from the shelves. The list goes on and on — from classic works like “The Great Gatsby” by F. Scott Fitzgerald, “The Grapes of Wrath” by John Steinbeck, “The Color Purple” by Alice Walker and “Lord of the Flies” by William Golding.

Some schools have gone so far as to ban students from reading “The Diary of Anne Frank”. At one point, this list of banned books comprised some of the most notable titles from curriculums around the country, but now these books are being marked with a “scarlet letter,” a not-so-subtle reference to another frequent member of the banned book club.

Few are seeing the real danger of banning any book that conveys a message that school administrators are uncomfortable with. Books are gateways to different worlds — worlds that sometimes mirror our own and point out the flaws in our realities.

Books can provide great warnings to us, like Arthur Miller’s “The Crucible”, which was challenged at the Cumberland Valley High School — a criticism of McCarthyism in the 1950s — or George Orwell’s “1984”, which school administrators in Jefferson County considered banning — which ponders the dangers of totalitarianism. “Fahrenheit 451” explains the danger of banning books. Books provide us with keys to knowledge, and knowledge is power. If we steer into a society where knowledge is feared, we are heading toward calamity the likes of which not even “Harrison Bergeron” — a dystopian short story by Kurt Vonnegut — could have prepared us for.

We are forced to contend with the question of why these books which were once some of the brightest stars of the literary universe, are now being shunned. While there are many reasons, perhaps this trend is largely explained by the fact that people in positions of power are afraid of these books. Under our current system, some prosper while others fight for scraps. Needless to say, the people that benefit from this system the most are the very same people that determine which books are read and which are not spoken of.

It is in their interest to try to rid their systems of the books that may inspire others to seek change. Some people ban books because the books contain some message that they do not agree with — instead of allowing people to form their own opinions, they ban books to deprive them of this opportunity. These people claim to make these decisions out of an abundance of caution, to ensure that no students are led astray by the “outlandish” and “dangerous” ideas presented in these books. In reality, they are afraid of allowing students to think freely, which provides a grain of truth to their statements of caution.

It seems that the books which challenge the established rules and societal norms that favor the privileged are increasingly finding themselves on lists of banned titles. The absence of liberty fosters dissent, and the absence of knowledge fosters oppression. “Fahrenheit 451”, “1984”, “Harrison Bergeron” and “The Handmaid’s Tale” — by Margaret Atwood — are just some of the titles that prove this very point — that explain the real danger of banning books. It’s an unfortunate reality that people are becoming increasingly cut off from ideas because some are afraid of what books can do.

Language can be a great unifier and a powerful tool for diplomacy and peace. At times, it can be a weapon far mightier than the sword, which is precisely what the officials cultivating these lists are afraid of. They would rather we gather together in parks and city squares to burn our books than allow a society where freedom of thought is not only permitted, but encouraged. If banning books does not scare you now, it should — I promise that a society where the practice of banning books is commonplace will be beyond scary.