Feminism should not exclude transgender women 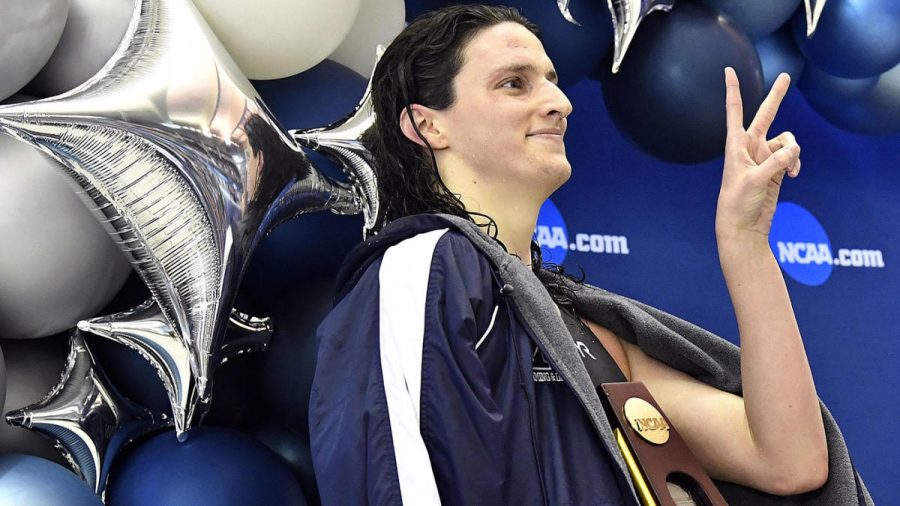 Lia Thomas poses atop the podium at the NCAA Championships.

A long-winded debate around the inclusion of transgender identities in feminist spaces has recently been sparked again — with trans athlete Lia Thomas at the center of it all. Thomas recently celebrated her victory in the 500-yard freestyle event at the U.S. collegiate swimming championships.

While she and her teammates celebrated her achievement, many individuals have criticized Thomas because of her sex assigned at birth — claiming that Thomas has an unfair biological advantage in comparison to her competitors. This has been a primary argument for those not in favor of trans inclusion in sports. However, this is an argument that is both not based on facts and transphobic in nature.

It may seem shocking that many of the people invalidating Thomas’ win are people that self-identify as feminists. For many years, there has been an issue in the feminist community regarding whether or not trans women should be included. Several individuals within this group believe that the inclusion of trans women invalidates the experiences of so-called “real women,” meaning cisgender women.

Trans-exclusionary radical feminist, or TERF, is a term that is often used in reference to people with these beliefs. A proponent of this belief system is J.K. Rowling, the author of the Harry Potter series. Rowling herself has claimed that she identifies as a “gender-critical feminist,” and holds the belief that the “denial of sex” is misogynistic.

For a long time, this belief system was pushed as being a “pro-lesbian” perspective, as many online spaces for lesbians felt as though lesbians were being “forced” into transitioning into men to fulfill a heteronormative ideal. However, a multitude of people who identify as lesbians have come forth to state that this belief is not endorsed by the whole community.

Additionally, the overall idea of what lesbianism is has recently changed drastically — with many gender identities, such as non-binary individuals, feeling a connection with the label. The trans experience and the lesbian experience are often intertwined in complex ways. Reserving it strictly for cisgender women is problematic in its own right, and it violates many of the principles of inclusion that the LGBTQ+ community centers itself on.

As for how this all relates to the case of Thomas and other trans athletes, these trans-exclusionary feminists have been seen protesting the victories of these athletes on the basis of it not being fair for cisgender women. Some have even gone as far as to call it misogynistic and infringing on the rights of cisgender athletes.

The fact of the matter is that it is already a process for transgender individuals to participate in the sports category of their choosing. First, USA Swimming’s policy is that a transgender athlete must undergo three years of HRT (hormone replacement therapy) before being allowed to compete. Thomas was six months short of this requirement but was approved by the NCAA to compete provided she had a low enough testosterone level.

Her testosterone levels were low enough for her to be able to compete, and her stats additionally proved that her win could not be attributed to a biological advantage. In fact, Thomas’ performance has improved in the past three years, despite the dip in her testosterone levels and muscle mass. Therefore, her win can only be accredited to her additional years of training.

Some of Thomas’ competitors have come forth in support of her, as well.

“As a woman in sports, I can tell you that I know what the real threats to women’s sports are: sexual abuse and harassment, unequal pay and resources and a lack of women in leadership,” Erica Sullivan, the third-place holder in the 500-yard freestyle said. “Transgender girls and women are nowhere on this list.”

For a community of people that are meant to be catalysts of inclusivity, feminists as a collective have a lot of work to do on adopting more inclusive spaces for trans women. Thomas is not the first — nor close to the last — trans woman to experience explicit hate speech and threats solely on the basis of her identity. The high suicide rate among transgender individuals should not be a surprise, considering the treatment of these individuals in many aspects of life.

I am a woman, yes. My womanhood, however, is not remotely threatened by women who have undergone different gender experiences than I have. While many of these radical, exclusive feminists hold the belief that trans women are throwing out the idea of biological sex — something that supposedly endangers the rights of cisgender women — I would like to offer a counterpoint.

Trans women do understand the concept of biological sex. It is not only something that they are aware of but something that many of them have to actively fight against. However, this fight is not quite as easy as many make it out to be.

Bottom surgery on its own can cost upwards of $25,000, while top surgery may cost between $7,000 and $10,000. The recovery is long and painful, and the management of these new body parts is something that those who choose to have the surgery have to deal with for the entirety of their lives. If the sexual assignment of a person is such an essential factor to these radical feminists, then perhaps we could find a solution in providing more accessible avenues for trans individuals to pursue these surgeries.

Regardless, the argument that biological sex is such a strong determinant of gender is an outdated perspective. Several studies have documented that genitals, chromosomes dictating sex and secondary sex characteristics can vary greatly in humans. A study conducted by Dr. Charles Roselli, a professor at the Oregon Health and Science University, found that the sexual differentiation of genitals occurs in the first trimester of pregnancy, but the sexual differentiation of the brain occurs in the second trimester.

Under this reasoning, there may be certain cases in which the sexual differentiation of the brain and the genitals do not match — resulting in humans with syndromes such as gender dysphoria. Therefore, the argument made by these exclusionary feminists that biological sex is a core part of womanhood is inherently flawed.

It is essential that the scientific community further its efforts in the study of gender psychology and development to provide more treatment options for transgender people. It is also imperative that all feminists work to provide safe and inclusive spaces for trans women. This is not only an inherent reflection of feminist beliefs, but it is suicide prevention. Trans women, including athletes, should never be made to feel discriminated against by the very group made to accept them.