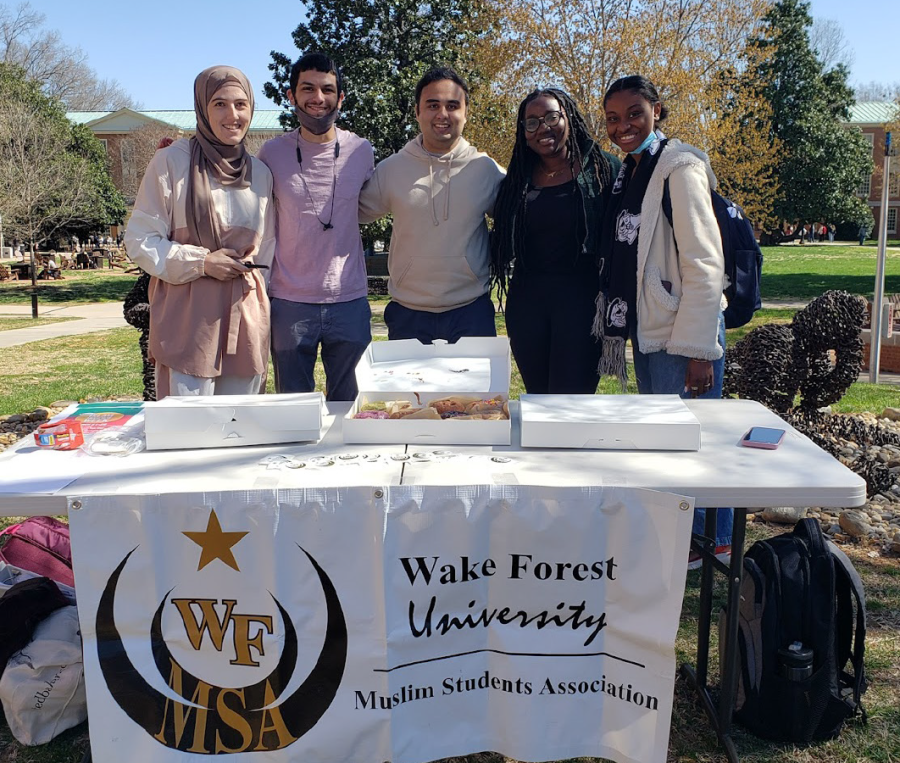 Members of the Muslim Student Association gather on Tribble Courtyard for the first of last week’s events, “Ask a Muslim”.

During this year’s Islam Awareness Week, Muslim students found new ways to connect with their non-Muslim peers, both through education and celebration.

“You know that awkward moment when you want to ask a question but don’t want to be offensive?” said Associate Chaplain for Muslim Life Naijla Faizi. “We are opening up the space for you to ask.”

Last week’s events were organized by students in the Muslim Students Association (MSA). Faizi helped organize the first Islam Awareness Week when she was a member of the MSA in 2013.

And even though Islam is the second-largest religion in the world, it is one of the smallest faith communities at Wake Forest, representing only one percent of the student population according to the Office of Diversity and Inclusion’s 2020 Report.

Because of this, taking part in Islam Awareness Week was just as important for the Muslim students who organized it as it was for the non-Muslim students, according to Faizi.

“Being at college and not having a friend or not feeling like you belong can be very difficult,” said the president of the MSA, senior Mariama Jallow. “But events like these give us the opportunity to not only break down stereotypes but also to foster the sense of community we’ve created for ourselves.”

The first of last week’s events was called “Ask a Muslim”, where students passing through Tribble Courtyard on Monday afternoon could stop by a Q&A table to ask questions about anything related to Islam — and to receive a free doughnut.

The event was inspired by the Muslim American rapper Mona Haydar who in 2015 started a conversation table with the same name.

On March 22, the MSA worked in collaboration with the Student Union to host a trivia night at Shorty’s.

“It’s an easy way for students who are already taking classes about Islam to practice and see what they know,” Faizi said.

Wednesday’s event featured a showing of the film “Malcolm X” (1992) in the ZSR Auditorium. The film was selected for its focus on the African American Muslim community, which can often be overlooked.

“When most people think of Muslims, they don’t think of Americans or African Americans,” Faizi said.

The same idea echoed through in Ring Theater in Scales Fine Arts Center Thursday evening during Muslim American playwright Rohina Malik’s solo performance of her critically-acclaimed play “Unveiled”. Through a one-woman play, Malik told the stories of four Muslim women, each of them coming from different ethnic backgrounds and facing emotional situations that both exposed and challenged the stereotypes that are common in western media.

“As a Muslim woman watching what she does, you feel very represented,” Faizi said. “There are parts of every one of her stories that I can relate to.”

To end the week, the MSA held an open Jum’ah, or prayer service, sharing in food and conversation with non-Muslim students.

The service was held in the MSA lounge in Collins Residence Hall — the same place Muslim students meet for Jum’ah every week. This was a change from previous years, when the open Jum’ah was held in Reynolda Hall’s Green Room.

“Muslim students wanted to feel empowered to have a public place to pray on campus,” Faizi said. “Being able to pray in the university’s most iconic administrative building helped many students feel supported and included, but times have changed at Wake Forest.”

While the decision to change locations was made partly out of consideration of the inauguration events, it also reflected a change in thinking for MSA leaders.

“We’re bringing [other students] into our own home,” Faizi said. “It makes it much more intimate because the people who are there really made an effort to be there.”