The monster originated in Japan amidst nuclear fallout scares 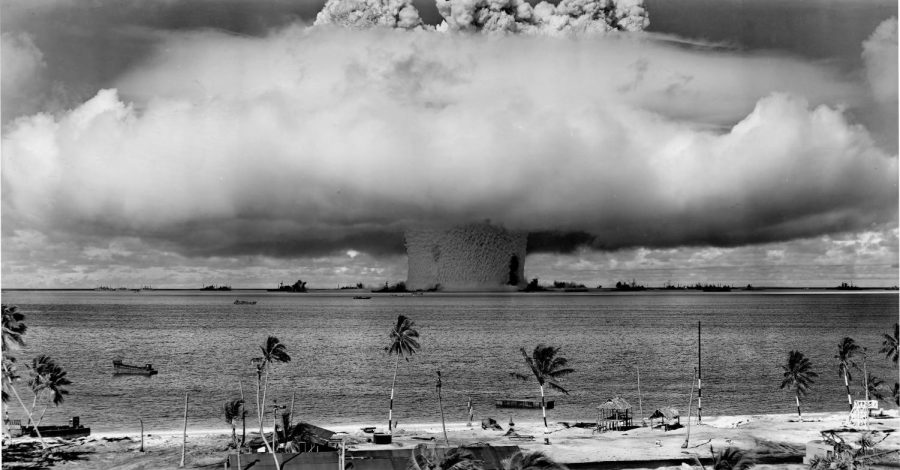 The Godzilla movies are in part based on the Bikini Atoll nuclear test.

On March 1, 1954, just nine year after the detonation of the atomic bombs over Hiroshima and Nagasaki, the U.S. Military tested a hydrogen bomb near Bikini Atoll. The bomb was ten times more powerful than the ones that devastated Japan during WWII. Video footage of the explosion shows a mushroom cloud of incomprehensible size blossoming in the ocean. The cloud of smoke formed spiny ridges — reminiscent of reptilian spikes. The ocean pulsed with concentric ripples the size of typhoons.

Roughly 100 miles east of the blast sailed the Lucky Dragon No. 5, a Japanese tuna boat. White ash floated down to the deck like snow, and as the crew held their hands out in dismay, some vomited blood over the rails. Two weeks later, the ship reached Yaizu, its home port. The men were hospitalized in Tokyo, and six months later, the radio operator died. Japanese doctors named the cause of death as radiation poisoning.

The residents of Bikini Atoll who evacuated were assured that they would only be temporarily relocated. In January 1948, about 18 months after the Bikini islanders were evacuated, the residents were starving to death. What little fish they could gather were now poisonous. Months of pleading to the U.S. Navy for aid went ignored. Further relocations to other neighboring islands were frivolous, as each island was wrought by food shortages and dangerous waters.

Tragedy for those who were poisoned became inspiration for those who were artists. Japanese film producer Tomoyuki Tanaka felt compelled to make a film that played on growing nuclear fears and the rising popularity of monster films.

Eight months after the explosion, “Godzilla” (Gojira) opened in theaters. A giant, radioactive monster awoken from its slumber after nuclear tests ravages and flattens hopeless cities. In the decades that followed, “Godzilla” became the longest-standing film franchise to date, with 36 movies made since Tanaka’s film in 1954. Though the plot of each movie varies slightly, most films use the giant lizard to make commentary about the hubris of humanity, technological advancement without wisdom and ecological destruction.

Rising fears of nuclear war and the dangers of radiation poisoning most likely fueled Godzilla’s origin story. Unlike the fisherman near Bikini Atoll, however, Godzilla is immune to the dangers of nuclear radiation. In fact, Godzilla is typically depicted drawing on nuclear power to fuel his attacks. Amidst the nuclear arms race of the Cold War, this radioactive monster was unhindered by what most feared was inevitable mass destruction.

Godzilla rarely allies with any side. Whether the monster is on the side of humans or against them is ambiguous in many of the films. Like the Earth, Godzilla generally remains unphased by the wars and political decisions of humans. The monster awakens, flattens entire cities and then recedes into the ocean.

In recent years, concerns about climate change and environmental destruction have translated onto the screen, altering the narrative of Godzilla. The movies are increasingly centered around Godzilla ‘restoring balance’ to a planet plagued with overpopulation, disease and overconsumption. Godzilla is now a symbol of nature both taking revenge on humans for their hubris and being a victim of that hubris. Leveling cities, annihilating advanced weaponry, taking millions of lives — Godzilla both destroys civilization and restores natural order.

One of the reasons Godzilla has remained relevant for so many years is his versatility as a monster. As opinions have changed throughout time and new technologies have brought forth new panic, the king of monsters has been an ever-changing embodiment of humanity’s greatest fears. Godzilla is a living documentation of our historical collective anxieties and cultural foils. Yet, the indifference with which Godzilla regards humankind is comforting.

Humanity is time and again placed at the mercy of this radioactive dinosaur, a loss of control that stands in stark contrast to the narrative of human achievement we boast today. Maybe we subconsciously desire to hand the reins over to natural order — to be freed from the bonds of modern society. Perhaps, the real monster, the real “Godzilla” — is the very frightening reality we already live in.

Correction April 4, 2022: An earlier version of this article incorrectly implied that bombs were dropped on Hiroshima and Nagasaki in 1953.