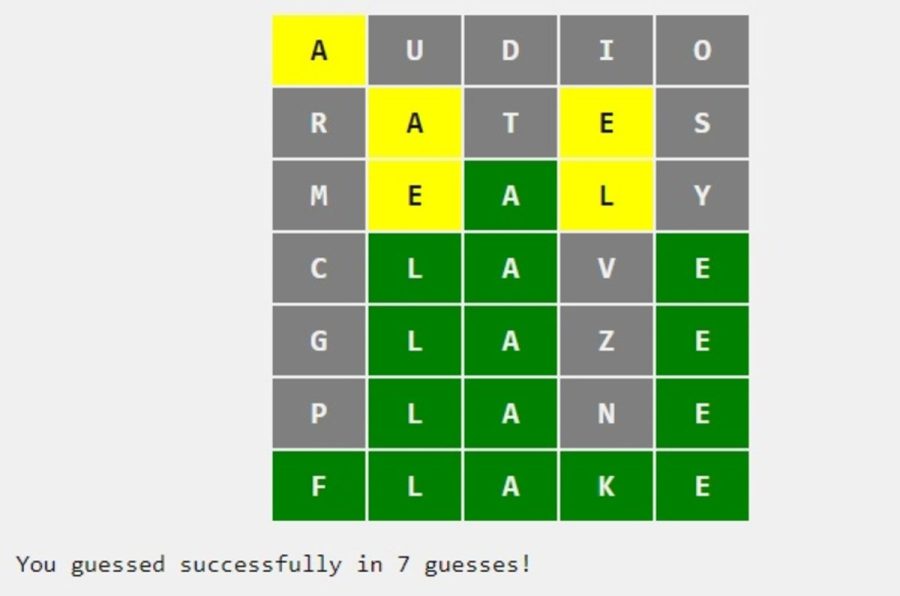 Absurdle is one of the many Wordle variants.

Nowadays, completing the New York Times Wordle puzzle is routine. Seeing five green squares in a neat row is an omen for a good day. The game has inspired a slew of spin-offs, and I am going to try seven: Taylordle, Absurdle, Heardle, Globle, Mathle, Who Are Ya and Semantle.

First, I tackled Taylordle, which is a variation of Wordle using only words related to artist Taylor Swift. According to Spotify Wrapped she was my most listened to artist last year, so I knew I had this in the bag.

Gyllenhaal initially came to mind. Bullying Swift’s ex-boyfriend — especially after “All Too Well (10 Minute Version)” — is a favorite hobby of fans. Unfortunately, his name was two letters too long.

I decided on simplicity and started entering album titles. “Evermore” and “Folklore” are a pair, and after discovering the word began with “F,” Fearless was a natural successor. Score! This album introduced me to the artist at ten years old, so I closed the tab feeling nostalgic.

Next up was Absurdle. Players have unlimited attempts to discover the non-predetermined secret word, but the software is, well, absurd. Enter a guess and Absurdle will spit back the combination of greens and yellows which correlates to the most likely answers, effectively narrowing down your options as little as possible. Check out the site for a full rundown of the programming.

I pulled out good old “adieu” first, hoping to eliminate vowels. Then, I input random words to cover the consonants and brainstormed double-letter words with the remaining letters. The winner ended up being “magma”.

This is a game of forcing the computer to reveal as much information as possible when it is wired to do the opposite. It can be played over and over so long as a player selects different starting words. It feels like a battle of wits.

Heardle moves away from the letter-guessing game format by playing clips from songs for players to guess instead. Unless you listen to a variety of music, identifying a track from its opening notes is challenging. I ended up skipping through seven seconds of ambiguous hip hop chords before realizing it was Cardi B singing “Up”. Less popular solutions allow you to discover new songs and broaden your musical horizons.

Geography and math enthusiasts will enjoy Globle and Mathle. The former prompts players to guess countries and uses shades of red to indicate proximity to the selected territory. Russia was my first pick and I got lucky selecting the solution, China, for my second guess. The latter presents a number that must be the answer to an input equation, and despite my aversion to Manchester Hall and its math classrooms, it was surprisingly fun.

Who Are Ya is for you sporty readers. It provides the blurry headshot of a soccer player in one of the Big Five European leagues and returns nationality, league, club, position and age. I occasionally follow the Premier League, so I was overconfident before realizing that I needed a player in the Italian Serie A and had already guessed the only one I knew, Zlatan Ibrahimović. At that point, I admitted defeat and called in the big guns — my fifteen-year-old brother — who figured out it was Leonardo Bonucci, laughed at me and hung up.

Finally, we have arrived at my archnemesis: Semantle. This game is the Moriarty to my Sherlock, the Perry the Platypus to my Dr. Doofenshmirtz.

Each guess receives a rating based on its semantic similarity to the target word, which is determined by analyzing a database of news articles. Thus, rankings are determined by which words journalists use in proximity. Alternative parts of speech and homonyms can throw you off, while antonyms can score surprisingly close.

I drove myself to madness over Semantle. I played all day — during class, with friends, while procrastinating homework — and diligently pulled out my phone whenever a new possibility occurred to me. I hit well over three hundred guesses and the closest I came was education, pedagogy and tutelage. Once I started hallucinating thesauruses, I decided I had to quit, and the next day I discovered that the secret word was “curriculum”.

Frustration aside, the people of the internet are delightfully creative. Mindless entertainment is always at our fingertips, but instead of shunning new technologies, creators have harnessed their many possibilities. If busy college students spend their precious free time voluntarily expanding their critical thinking skills through these games, our generation may reignite its love of learning yet.