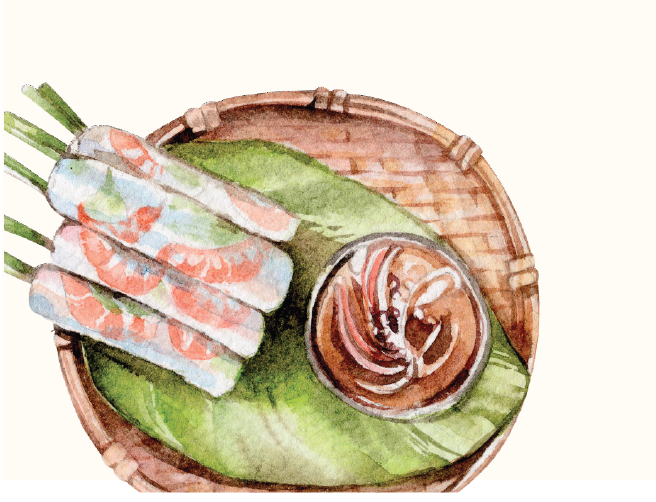 “If you knew what I knew about giving, you would not let a single meal pass without sharing it in some way.” These are wise words that were said by an even wiser individual, Siddartha Guatama — the venerable Buddha.

Food is more than a means of survival, more than something that our bodies necessitate. Food crosses cultures, generations, lives and stories that all intersect over a meal. From a young age, I was taught the incomparable beauty of food and preparing a meal with love and intention. I was never one to eat just because I needed to — I desire meaning in the food that I am eating or preparing.

Beyond the delicious meals that my parents prepared for me growing up, learning about food shaped a part of my identity and was an integral part of my culture. Being a Southeast Asian American, I always struggled with maintaining my Vietnamese identity in a society and culture that made me feel wrong for the way I looked or the food I ate. While I am not here to discuss the racial implications of my history with food, it is an important prerequisite to address before diving into some anecdotal stories of my favorite Vietnamese dishes.

This dish is number one simply because it has been incredibly integral to my life. It is a dish cooked during celebratory moments like my birthday and one that I have loved since childhood. This is not an easy feat considering that I was an incredibly picky child that despised most of the foods that graced my dinner plate. A sea of noodles is packed together in a delicious, slightly salty, slightly sweet broth that nests nicely with tender beef and various vegetables (basil is my premier choice as a beautiful component to the overall composition of the soup).

Perhaps it’s the intention, love and care that goes into assembling each bowl, or maybe the 24-hour prep time that the broth demands — either way, my mom’s pho is a dish that, every time I eat, I will be reminded of the fond memories of celebration and warmth that are associated with it.

Before this dish, I discussed pho — which is actually widely known and gaining popularity in the United States among non-Vietnamese populations as more Americans fall in love with the soup. However, another noodle soup — bun bo hue — might be lesser known to those who don’t have a Vietnamese restaurant in their neighborhood — or if you’re not Vietnamese.

The components of the dish are fairly similar: noodles, beef broth, beef and an assortment of herbs and vegetables. However, the flavors could not be more different, as bun bo hue offers a spicy and deeply layered soup experience. Another key aspect of the dish is the size of the noodles — as they are noticeably larger in radius than pho noodles.

I did not always like bun bo hue growing up — the bright red color had always thrown me off and I let my childish predications of being a picky eater dominate my palate. Now, however, bun bo hue has grown to be one of my favorite meals ever, and — in terms of taste — I might argue that it beats pho, but it falls short in having that nostalgia quirk that is the reason why pho is so near-and-dear to my heart.

As we come to an even lesser-known dish, we have strayed away from the soups (no, I will not be talking about bun rieu, another popular Vietnamese noodle soup that I simply cannot bring myself to like). Banh bot loc is a type of clear dumpling that is steamed and filled.

My favorite preparation of the dish and one that I insist is the only proper way to eat banh bot loc, is to have the dish steamed and wrapped in banana leaf. Most commonly, the filling consists of pork and shrimp and is served with the delicious dipping sauce, nuoc mam (fish sauce).

Again, this is another dish that I did not dare to try. It was another missed opportunity as a child due to my negative attitude toward trying new foods.

It is pertinent to note that a factor in my hesitancy or disfavor towards trying new foods was a result of the stigmatizition of traditional Vietnamese foods that were uncommon in the United States. Banh bot loc, accompanied by fish sauce, was labeled as “stinky” or “alien food” because of the physical characteristics of the dish.

At first appearance, the dish is gelatinous and very visibly different from common American foods, leading to the ostracization of such foods that could be labeled as “otherly.”

Despite preconceived notions, society in the United States has grown to be more accepting of foods of different cultures as they become mainstream. Pho and bun bo hue are prime examples of this and I can’t wait for banh bot loc to be common enough that I do not have to make a nearly two-hour drive in order to satiate my appetite.

Goi cuon, also known as Vietnamese spring rolls, is a versatile dish that has grown to be one of the most refreshing and delicious meals that I have loved to make.

A fond memory that I associate with this dish is introducing it to my friends at Wake Forest after bringing back all the components after a visit home. I must admit, I was reluctant at first and a little embarrassed because I was worried that untoward comments would be made regarding the physical appearance and composition of the dish. Luckily, the people that I surround myself with and consider to be close friends, were nothing but accepting and full of gratitude for showing them something delicious.

Goi cuon can be made with any filling, but I will describe my personal favorite way to assemble it. One requires rice paper that is soaked and warm-hot water with just a slight wash, and this will act as the wrapping for the roll. The roll is then filled with vermicelli rice noodles and various meats and/ or vegetables. I prefer adding fresh shrimp and pork belly with lettuce and chives to mine before I roll it up.

The dish is normally paired with a peanut sauce and/or a fish sauce. I can recall many afternoons coming back from high school to prepare all of the components and make the dish.

While I only had space to describe four dishes, there is vast depth and breadth to Vietnamese cuisine that you simply must try for yourself. If there is anything to take away from this, it is to open your mind and heart (and stomach) to foods outside of your comfort and culture. Food brings us together.