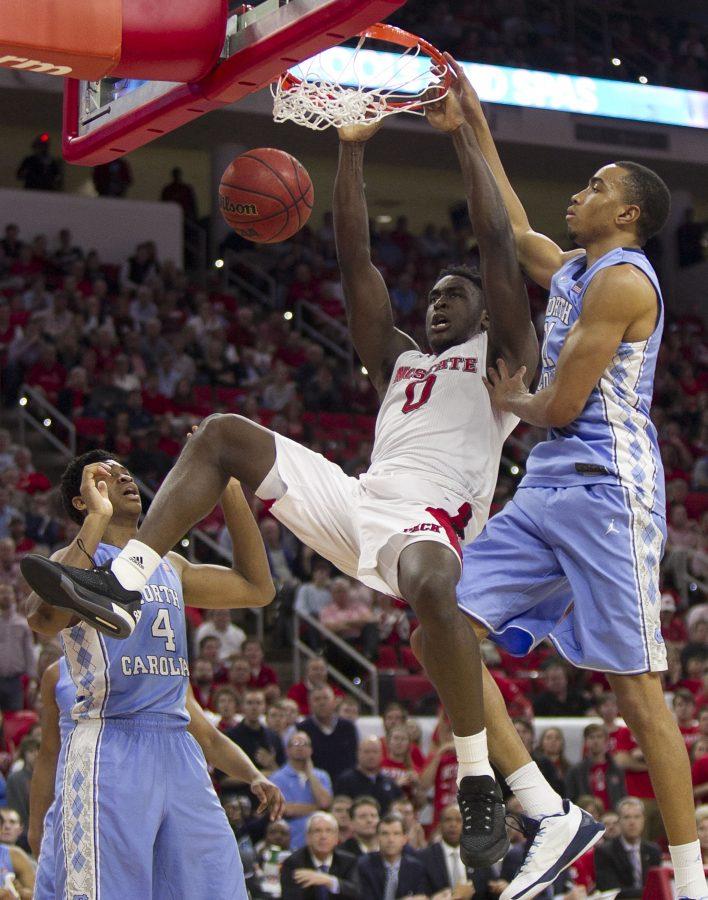 The game of the week in the ACC was between North Carolina and Virginia on Saturday night in Charlottesville.

This game is ultimately going to help determine who wins the ACC regular season title and holds the No. 1 seed in next week’s conference tournament. The game met high expectations as we saw a matchup of Carolina’s strong offense against Virginia’s solid defense.

The entire first half went back and forth, as the Cavaliers took a 38-35 lead heading into the locker room. This lead easily could have been larger, but everytime the Cavaliers began to pull away, Carolina would go on a quick run.

Not much changed in the second half as UVA hit their free throws down the stretch and came away with a massively important 79-74 victory over the No. 7 team in the nation.

Brice Johnson only had 12 points for the Tar Heels, but sophomore guard Joel Berry II added 21 points. My big takeaway from the game was that UNC never really looked settled in.

Granted, the stout UVA defense had a lot to do with that, but I would’ve liked to see all-ACC forward Johnson get more touches down the stretch in this one. North Carolina has the talent to go far in both the ACC and NCAA tournament, but they need to run the offense through Johnson in order to do so.

For Virginia, this win not only means potentially locking up the ACC regular season title, but it also gives them a very good shot at receiving a No. 1 seed in the upcoming NCAA tournament.

As it seems every season, ACC player of the year is again going to be a very tight race. Anthony ‘Cat’ Barber leads the conference in scoring by a sizeable margin; however, his team only has four conference wins. Malcolm Brogdon is the UVA guard who put on a sensational performance on national television against the other big frontrunner Johnson.

While Johnson didn’t look spectacular by any means against the Cavaliers, I still think he eventually will come away with Player of the Year for his dominating performances this season.Dropping 20+ points and getting 20+ rebounds in multiple games this season is unheard of in college. That’s why I believe he is the one who will be rewarded come season’s end.

The player of the week is none other than Virginia’s senior guard, Brogdon. Putting up 26 points in UVA’s most important game of the season against North Carolina, Brogdon looked as if he could do no wrong. He’s not flashy or outstandingly athletic, but he just gets it done.

ESPN’s Jay Bilas was calling the game on Saturday night and at one point simply said, “Is there anything this kid does wrong?” That’s the epitome of Brogdon. Because of Brogdon’s play and the defense and intensity UVA plays with, I believe Virginia has the best chance to win a National Championship this season.

A game to watch for this upcoming week is No. 7 North Carolina traveling to No. 15 Duke to take on the Blue Devils on Saturday night. In what was one of the best games of the season in Chapel Hill just last month, we shouldn’t expect this Tobacco Road rematch to be anything different.

The Heels will want this one as it will affect their ACC Tournament seeding, but it’s more than that for them. They’ve dropped three games in a row to Duke, and losing a fourth will only add more fuel to this fierce rivalry. Look for Johnson and the rest of UNC’s star players to dominate the paint. But if Duke’s Amile Jefferson recovers from his injury, it could be an entirely different game.