WFU Theatre closes season with ‘She Loves Me’

The classic adaptation of ‘Parfumerie’ tells a story of disguise, secrecy and the struggle to find true love 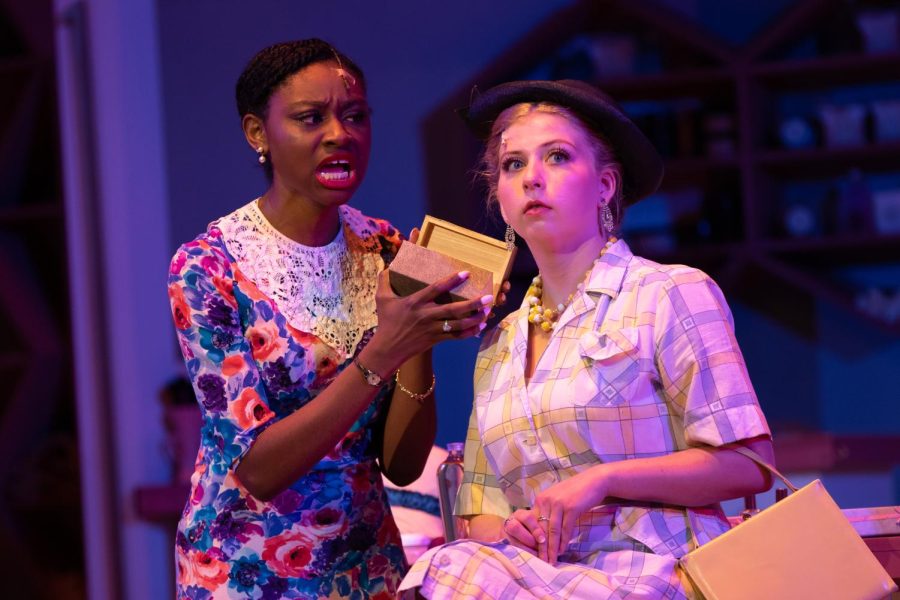 "She Loves Me" is more lighthearted than other plays WFU Theatre has performed.

The Wake Forest Theatre is performing “She Loves Me” as its last production of the season this weekend on Tedford Stage in Scales Fine Arts Center.

Written by Joe Masteroff, “She Loves Me” is a Tony Award-winning musical adapted from the 1937 play “Parfumerie” by Hungarian playwright Miklós László, a play that has seen many adaptations, including “You’ve Got Mail” (1998), a romantic comedy starring Meg Ryan and Tom Hanks.

Set in a parfumerie in 1930s Budapest, “She Loves Me” tells the humorous story of the struggle to find true love. Two bickering coworkers spend the musical trying to uncover the identity of their secret admirer only to discover what the audience knows the entire time — that they are each other’s secret admirer.

“She Loves Me” premiered on Broadway for the first time in 1963 and was revived twice on Broadway later in 1993 and 2006. Now, directed by Dr. J.K. Curry, a professor in the Wake Forest Department of Theatre and Dance, the musical will be performed on Tedford Stage.

Unlike other plays the Wake Forest Theatre has performed this season, such as “The Normal Heart” and “John Proctor is the Villain”, “She Loves Me” strives to be more of an entertaining story than an explication of pressing social issues.

“When I teach dramatic literature classes I usually want to spend time with plays that tackle various social issues,” Curry said. “However, sometimes I also enjoy a piece of theatre that is just for entertainment. ‘She Loves Me’ fits the bill with a romantic story, humor and a variety of enjoyable songs.”

All of the songs in the musical are performed by a full student orchestra conducted by musical director David Hagy, who is retiring from Wake Forest after 26 years. “She Loves Me” will be his final production.

The joyful nature of “She Loves Me” is inseparable from the context in which it was created. In the same way that it brought light-hearted entertainment to the world in the ‘60s, the musical now serves a similar role during a pandemic.

“‘She Loves Me’ was written during the ‘Golden Age of Broadway’, where musicals were made because they were nice to listen to and entertaining to watch,” sophomore Evan Souza, who plays one of the leading roles, Ladislav Sipos, said. “It’s important that we get to watch this story now that we are edging slowly out of the storm cloud of emotions that the pandemic brings.”

Sophomore Georgia Orchid, stage manager of “She Loves Me”, is proud of how the production turned out, highlighting how the show’s success comes from its cast’s resilience. She also spoke about her personal journey to being a stage manager for “She Loves Me”.

“There’s no better way to learn something than to jump right in and fail at it,” Orchid said. “By taking the risks, we’ve crafted this beautiful show that is chalked to the brim with talent from every corner of the Theatre and Dance Department.”

Light designer Kevin Frazier described the breadth of effort it takes to make the show successful.

“The number of students involved is of a magnitude different than what we’re used to,” Frazier said. “It’s just a much larger undertaking than normal shows.”

“One of the things I enjoy about working on a musical is the number of students, faculty and staff who are brought together to create the production,” Curry said. “For ‘She Loves Me’ it has also been exciting to see audiences back in the theatre in good numbers to enjoy live performance.”

Correction April 8, 2022: An earlier version of this article incorrectly stated that Dr. J. K. Curry was the chair of his department. Additionally, a quote by Georgia Orchid was further contextualized to improve the clarity of her statements.