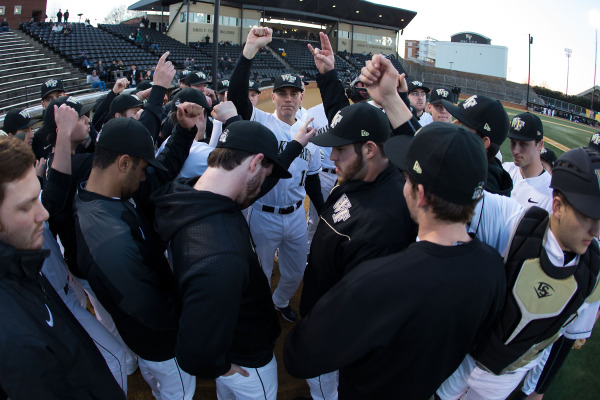 They opened up the season with a four game home stand and took advantage of it starting 4-0. They then took one of a three game series over the weekend against Southern California on a road trip against the ranked Trojans team. The Deacs are currently 5-2 and sit fourth in the Atlantic Division of the ACC. The team will begin conference play on March 11 when Clemson comes into town for a three-game series.

The Deacs began the 2016 baseball season with a gritty 3-1 win against a tough Georgetown team. On Feb. 19, Freshman shortstop Johnny Aiello had an amazing debut with two homers on each of his first two at bats. Junior Parker Dunshee tossed a great scoreless six innings with eight strikeouts. Rayne Supple and Donnie Sellers held the Hoyas to one run pitching in relief. Sellers earned his first save of the season in the win.

The Deacs won an offensive explosion against UMBC in the second game of the season 10-8. All-American and draftprosect Craig, went two for three, with a double, a three-run homer and four total RBIs. Craig also earned his first save of the season in the ninth to seal a strong 2-0 start. Junior right handed pitcher Connor Johnston earned the win with a quality 6.2 inning outing. These are likely the types of games that the Deacs will have to win if they want to make a deep run this season. The Deacs will need to score as many runs as possible to compensate for likely average pitching.

Wake Forest finished an undefeated opening weekend with an 8-4 win over VMI. After a two-hour rain delay, Juniors Mondou and Craig finished two for three and three for four respectively. Mondou had three RBIs and a homer. Craig had a three-run homerun and four RBIs. Sophomore Drew Loepprich pitched seven innings surrendering only five hits and striking out two. Sellers came in and struck out a batter to end a potential VMI rally and earn his second save of the season.

Wake Forest continued their momentum from a successful weekend beating the Davidson Wildcats, 7-4. A big fifth inning rally with doubles by Pyror and Craig put the Deacs up 5-3. Gavin Sheets hit a homerun and RBI double to help solidify the win. The bullpen put in an impressive 6.2 innings of work to earn the 4-0 start.

The Deacs first big test of the season was a three game series in Southern California to take on No. 21 USC. After dropping the first game of the series 9-4, the Deacs won the second game in a wild ninth inning. Pryor dropped a bunt single to start the inning and reached second on an errant throw. Aiello followed with a sac bunt to advance the runner but reached on an error. Drew Freedman pulled back a safety squeeze and the catcher attempted to pick off Pryor at third, but the throw was off target allowing Pryor to cruise in for the winning run. Despite a strong outing by Loepprich in game three, USC won 2-1 to take the series.

The Wake Forest baseball team will look to bounce back with a five game home stand starting Wednesday, including Mount St. Mary’s, Saint Peter’s, Towson, Harvard and Richmond. These are games that the Deacs will need to win if they are to be ready for ACC play in the coming weeks.