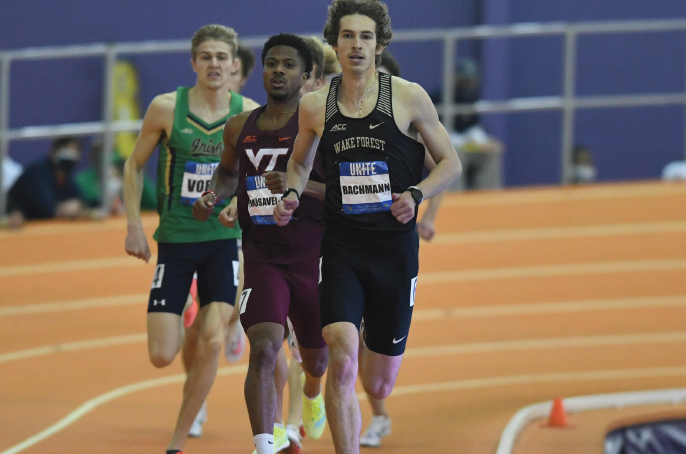 Redshirt junior Kenton Bachmann is preparing for his academic graduation in May by putting everything into his sport and his school work for this last month. The Knoxville, TN native is a crucial part of both the cross country and track & field teams, though he describes himself as more of a track runner.

The journey hasn’t always been easy for Bachmann, as he went nearly three years without setting a personal record. In his junior year, however, Bachmann put an end to the drought by beginning the season with a new PR in the 1500m (3:56.46) at the Raleigh Relay. He also finished No. 16 at the ACC Championships in the 800m and No. 23 in the 800m at the NCAA Division I East Preliminary Round. So far this season, Bachmann set a new PR in the 1000m (2:29.38) at the Hokie Invitational and took first place in the DMR (9:53.42) at the Bob Pollock Invitational. With the ACC and NCAA meets still ahead, Bachmann looks to end his college career on a high note with the support of his family, coaches and teammates.

Christina DeNovio: When did you first start running cross country? Did you play other sports growing up?

Kenton Bachman: I first started running in sixth grade. I ran middle school cross country for my county. Both my parents are runners — my mom was a collegiate runner. They wanted me to try out running, but at the time, I was also a soccer player. I played club soccer until eighth grade. I also played middle school basketball. I played a lot of sports as a kid because that was something that my parents valued.

CD: Would you say your parents inspired your love for running?

KB: I like seeing progression and watching results happen. I’m a results-oriented person, so I like seeing the hard work that I put in to try to get PRs pay off. I like watching my teammates run — I’ve driven to their cross country meets just to watch.

Our team has grown a lot since I came as a freshman. In the last decade, Wake Forest cross country has gone from being at the bottom of the conference to placing third the past two years. We won the regional cross country meet, and I drove to Louisville to watch the team achieve the goals we had set.

CD: Have you encountered any adversity as a runner?

KB: Track takes time. I hadn’t set a personal best in around three years. In my junior year, I ran a breakthrough time at our conference meet where I ran a 1:48 for the 800, which was my first time going under the 1:50 barrier, which is pretty big for me. I went from being kind of a nobody in the conference to finishing fourth at our conference meet just like that. It just takes years of hard work. You’ve got to go through hills and valleys as a track & field athlete.

CD: What made you choose Wake Forest?

KB: I think Wake Forest is the perfect blend of a Division I athletic program with strong academics. That blend was really marketable to my family and to me. I wanted to get the best education and the best athletic experience that I could have, and the coaches really sold that to me. And also Winston-Salem has some really great trails — Salem Lake, the Reynolda House Trails. Runners like pretty places to run, so that was really appealing.

KB: I’d say the 800m run is my favorite. It’s a race where you can have multiple approaches to it, where long sprinters can run it, or cross country runners can run it. There’s a lot of variety to the style of racing. It’s two laps, but a sprinter would take it out hard and try and hang. Someone with more aerobic training could come from behind at the end and kick past the field to win. I’d say I’m someone that’s kind of in the middle ground of that. I run 50 – 60 miles a week on average, which is on the higher end for a runner, but that really helps me to finish the last 100 meters of the race strong.

CD: What was the biggest adjustment coming from high school to college running?

KB: Everything gets taken to a much higher level. Academics was a challenge at Wake Forest at first. The time management side of things and getting adequate sleep were new. You have to maintain your stress. I try to go to bed by 11 p.m. every night because we have practice in the morning from 6:30 to 7 in the fall. We have afternoon practice in the spring. But, that first fall of freshman year was really difficult.

The people on the track and cross country team don’t have the same experiences as other students in sports because we need to really focus on our rest and our bodies or we will break down. It just takes a lot of time management to be a successful student athlete.

CD: What’s your favorite accomplishment from your time at Wake Forest?

KB: I’d say finishing fourth of the indoor conference meet for the 800m race. That was one of those moments where I saw all the hard work pay off. Another moment would be this year’s distance medley relay. I ran the 400 leg, and we finished fourth out of the conference as well. We hadn’t placed that high in quite a while, so it’s pretty cool to see the team do well. I wouldn’t be as successful as I am if it wasn’t for my coaches, teammates and parents. They are people that motivate me every day to do the things I do, even when it’s tough.

CD: What are you most looking forward to in your final weeks at Wake Forest?

KB: I’m just looking forward to graduating. I’m getting a degree from a prestigious university — that’s just exciting. That was always a dream of mine. I probably wouldn’t be in the situation I am today if it wasn’t for athletics and the support that I get from student athletes services and academic services. I have the ACC meet coming up soon in early May. We have East Regionals meet in late May. Then, hopefully, I will compete at the NCAA meet in June in Eugene, Oregon. So that’s the end goal right now.

CD: What’s your major? What are your post-graduation plans?

KB: I’m a communication major right now. I think marketing would be cool — it’s something that I’ve taken a couple of classes in. I took one of Professor Polly Black’s classes about marketing. It was an eye-opening experience on the world of marketing and a great introduction to the topic. The stuff you learn in the communication major is very practical. After graduation, I’m going to pursue a Master’s in management degree. I’d like to do a one-year business school degree. I will also be competing in track & field for a fifth year.

Editor’s note: This interview has been edited for clarity and brevity.