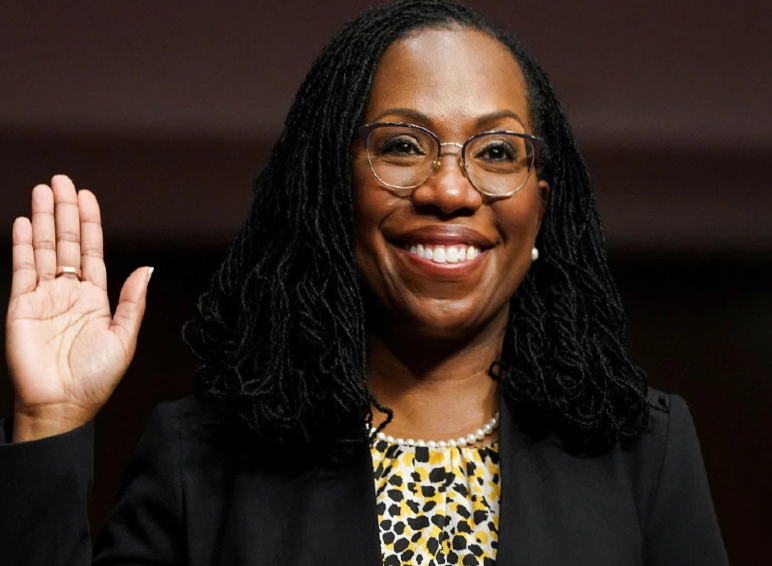 In a historic move, Jackson has been confirmed to the Court following a series of contentious hearings, making her the first Black woman and former public defender to serve.

Last Thursday, April 7, the U.S. Senate confirmed Ketanji Brown Jackson to be an associate justice of the Supreme Court. When she assumes the seat currently held by retiring Justice Stephen Breyer this summer, she will be the first Black woman to hold the title of justice and also the first former public defender.

Jackson — monikered KBJ — earned the vote of all 50 Democrats in the Senate, as well as three Republicans, Susan Collins of Maine, Lisa Murkowski of Alaska and Mitt Romney of Utah. All eleven Republicans on the Senate Judiciary Committee voted no.

Many Democrats slammed those same Republican members for their conduct during the hearing, in which Senators such as Josh Hawley of Missouri, Ted Cruz of Texas and Marsha Blackburn of Tennessee asked questions about child pornography sentencing, Critical Race Theory and the definition of a woman. These questions aimed to cast doubt on Jackson’s ability to be an impartial jurist, but Jackson did not take the bait and stayed on message.

However, as an article from Oprah Magazine pointed out, the constant interruptions and quoting of Martin Luther King, Jr. to try to cast antiracism as racism smells of misogynoir (misogyny directed towards Black women). Republicans, however, contend that their recent nominees to the Supreme Court had to deal with what they deemed to be unfair treatment and questioning from the Democrats on the Senate Judiciary. Yes, they are still mad that someone dared to accuse Justice Brett Kavanaugh of sexual assault and that the Judiciary Committee — gasp — investigated it.

I find the Senate’s confirmation process, however, to be much less interesting than what will now happen when Jackson is invested as justice next term. As mentioned previously — and in probably every article you have read about her — Jackson is a former public defender. She joins the Supreme Court with eight other prosecutors. In the past, the Supreme Court has shown extreme deference to law enforcement in civil rights claims and in upholding criminal convictions. It will be interesting to see if Jackson follows that trend or has a bit more sympathy for complainants bringing Habeas Corpus and Civil Rights Act petitions under 42 U.S.C. §1983 — which allows citizens to sue the government for civil rights violations.

According to the Legal Defense Fund, Jackson has served on a sentencing commission and seems to understand what discretion judges have and do not have in sentencing. She also seems to be decent at deciding the limits of qualified immunity, which puts a high procedural bar around suing officers of the state for violations of constitutional rights, especially in her ruling in Patterson v. the United States.

However, in Page v. Mancuso, Jackson held that probable cause must be evaluated in hindsight. I disagree — I think the Constitution serves to protect our rights to the fullest extent and that even if an act committed is wrong in hindsight, plaintiffs should be able to recover damages for that wrong. As a public defender, Jackson experienced firsthand the destruction incarceration can cause to a person’s life. To have no remediation for wrongful incarceration if it was only wrong in hindsight, to me, abandons those who have had their lives destroyed. Jackson has also not firmly stated if she would overturn any qualified immunity doctrine in her time as a Supreme Court justice.

According to the disability advocacy group The Arc, Jackson’s writings on the Antiterrorism and Effective Death Penalty Act (AEDPA) show that she is wary about how many opportunities those on death row have to appeal their sentences based on new information. AEDPA did away with successive appeals, meaning that for most people facing the death penalty, there is only one opportunity to receive federal habeas relief.

New evidence can change that and save lives. Recently, for example, the Innocence Project and the FBI published a report that said hair comparison evidence that was used to convict countless defendants was not based on scientific fact. Additionally, new evidence about an intellectual disability or new diagnostic criteria can prevent a defendant from being executed, as it is unconstitutional for the state to kill someone who is intellectually disabled. These new forms of evidence can be life-saving, so for Jackson to have reservations about this evidence being accepted is worrisome.

On other certain hot-button judicial issues, Jackson has been spot on. In her limited decisions on abortion access, she has supported the right to have an abortion as currently outlined in Roe v. Wade and Planned Parenthood of Southeastern Pennsylvania v. Casey. She has also made her commitment to protecting the rights of LGBTQ+ Americans clear, as is evidenced by her favorable reviews from groups like the Human Rights Campaign. Both abortion and gay rights cases will come up next term.

While any Supreme Court nominee is important and historic, Jackson’s nomination is especially historic due to its trailblazing nature. It is important to put things into perspective. Ultimately, unless something changes in the next two months, Republican-appointed justices will still hold a 6-3 majority on the Supreme Court when Jackson is sworn in. As such, Jackson’s first half-decade on the Court will likely see some dissents. But, as Justice John Marshall Harlan — who wrote the lone dissent in Plessy v. Ferguson — would tell you, sometimes dissents turn into majority opinions, and it is important to get those thoughts out there.

I hope Jackson follows the line of great dissents turned majority opinions, and I hope her tenure on the Court will get the United States closer to the ideal inscribed atop the Supreme Court’s doors — “Equal Justice under Law.”