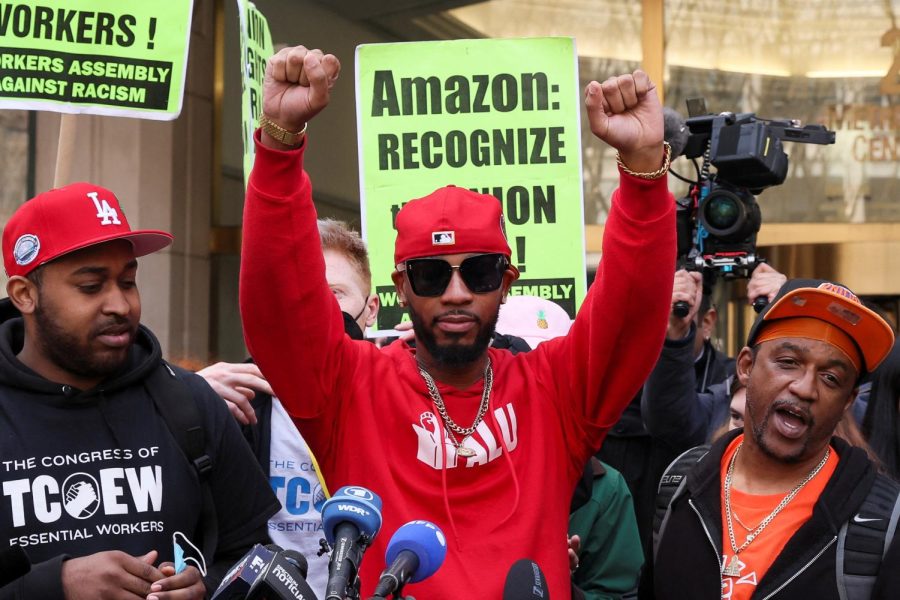 A monumental event has recently challenged the power dynamics between large corporations and their laborers. For the first time in Amazon’s history, employees at a warehouse have solidified a union under the National Labor Relations Board. On April 1, the board reported that the Amazon Labor Union (ALU) overcame Amazon’s attempts to extinguish a Staten Island warehouse’s unionization when the employee election resulted in a 2,654 to 2,131 vote in favor of the ALU.

The formation of this grassroots union allows workers to take a huge step towards taking power back from the company. That power is only small in relation to the expansive reach and economic dominance that Amazon can flaunt, which is why this union victory has instantly become a landmark event. Few expected workers to win the battle because their opponent is a juggernaut of influence and wealth. But the shockwave that the ALU has inspired will increase the potential for unionization amongst workers across the nation.

Christian Smalls, the president of the ALU, has remained vocal about the positive change his union can help empower. On April 5, four days after the successful election, Smalls tweeted that he had been “contacted by workers in over 50 buildings nationwide” for initial guidance in accumulating the necessary voice and outreach to unionize.

Imagining Amazon executives becoming worried about the increasing popularity of the new union — as well as the exponential growth its influence can lend to media exposure — creates an incredible picture.

The ALU has ratified its national recognition during a time in which the lopsided power struggles between gigantic corporations and their workers are constantly claiming news headlines. Every day, more and more online spaces are filled with complaints of COVID-19 negligence and injury potential in warehouses operated by companies such as Amazon.

In June 2021, BBC News reported on a research study that found that Amazon’s injury rate 5.9% worker injury rate was approximately 80% higher than those of competing companies in the United States. In November 2021, CBS News announced that Amazon would forfeit $500,000 in a settlement regarding claims that the company had withheld accurate COVID-19 case numbers from its workers in California.

Without the collective power a union offers, corporations can afford to be apathetic toward these workspace issues. Without a union encouraging resistance toward fear-inspired compliancy, workers are more susceptible to exploitation and underwhelming pay.

The ALU puts employees in a position to fight for the health benefits and financial credit that all workers deserve. In August 2020, the Economic Policy Institute reported that in comparison to non-union workers of the same education and skill level, workers with union contracts earn 11.2% more in wages.

Unionized workers gain easier access to paid sick leave as well as job preservation during particularly strenuous times, such as the COVID-19 pandemic. The ALU will prove an essential step in preventing Amazon from discarding concerns related to the pandemic in the future. As the first official union bound together by workers of the company, the ALU will encourage more voices to be heard across the country regarding health and safety policies. These effects will not be constrained to Smalls’ Staten Island, NY warehouse. In time, the rights that his union fights for will be picked up by blooming unions across Amazon’s multinational operations.

Smalls and his worker-led union deserve to be celebrated for the courageous grit it took to win the election against Amazon’s anti-union messaging. Even after the National Labor Relations Board’s verification of the ALU, the company continues to battle the voting results. Amazon has filed 25 objections to the board alleging that the election was held under compromising conditions. The response not only aims to redo the election, but also to plant fear and doubt within the ALU’s members and around its image.

The allegations of an invalid election have failed to break the confidence of the ALU. The latter responded by releasing a statement on Twitter.

“[Amazon] made false claims that ALU members coerced their coworkers, despite the fact that members are Amazon workers with no coercive authority,” the press release read.

“However, the Board has in fact found merit to charges that Amazon’s managers and consultants have engaged in coercive behavior during the campaign,” the press release read.

The ALU refuses to back down from an immensely powerful company that wishes that the voices of workers would remain within warehouse walls. Luckily, Smalls and his historic group of union members understand that their fight is worth the benefits workers will gain. In another tweeted press release, Smalls properly enunciated the win his coworkers have earned over Amazon.

“We want to thank Jeff Bezos for going off to space, because while he was up there, we were organizing a union,” the tweet read.