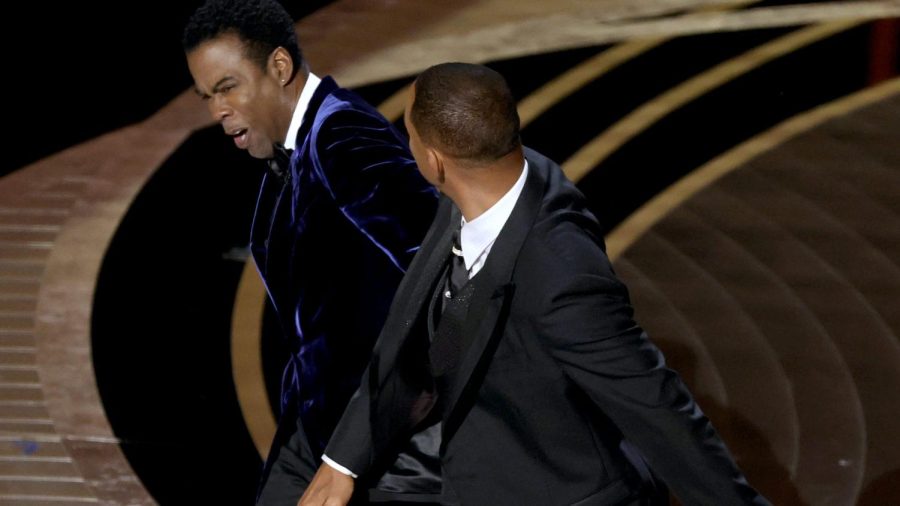 Will Smith slaps Chris Rock at the Oscars.

“The slap”. In thirty seconds, one action became a dominating headline over the next week. People took to Twitter to express their reactions and “intellectuals” were quick to post their theories about how “the slap” was the latest example of male aggression or had something to do with systemic racism — these were real headlines that I saw. It caught the attention of millions of people, but it left things that matter out in the cold.

It is ironic that this “slap” happened at the same award ceremony that nominated a film discussing this very issue. Adam McKay’s “Don’t Look Up” examined America’s focus on celebrity culture and the impact the media can have by distracting us from real issues — like a comet heading to destroy Earth.

A lot of critics felt the film was too heavy-handed in its metaphor for climate change, but I think the recent Academy Awards proved that it was spot on. We’re losing our ability to focus on relevant, pressing issues in favor of the cheap conversations about celebrities and their personal lives.

To demonstrate this, let’s take a look at the stories that were mostly ignored in favor of a new “hot take” about Will Smith and Chris Rock. For one, the Biden administration slipped up when the President called for a “regime change” in Russia. The administration was then forced to walk back their comments so that they wouldn’t upset a major nuclear power. There were developments in an apparent conflict of interest within our Supreme Court, involving Justice Clarence Thomas and his wife. We also witnessed the beginnings of a greater economic toll on the working class caused by China’s lockdown, due to their moronic “Zero-COVID” policy.

Perhaps the kicker to all of this is the UN releasing a new climate report saying that the world is on a “fast track” to disaster and that harmful carbon emissions have never been higher in human history. It’s funny because it seems “Don’t Look Up” was onto something, considering that I did not see any of the talking heads or pundits discussing this whatsoever. In fact, a daily look at YouTube’s trending page shows that all people really care about is what new movie is coming out, what Denzel Washington’s take on “the slap” is and whatever weird challenges the YouTube community is up to.

To put it simply: we are distracted. We are so quick to become worked up over nonsensical issues that even when something that should provoke concern makes its way into our collective consciousness, it does not concern us for more than a few days until the next shallow debate regains the spotlight. But what is the cause of this?

We did it to ourselves. If we keep clicking on videos and articles about these shallow concepts, then corporations and algorithms will keep feeding us the same material through a positive feedback loop. We should not expect corporations to fix this since it is smart to give the consumer what they want. But the next logical question would be why humans gravitate toward the shallow end in the first place?

This is a little harder to accept, as it can be explained by the fact that the easy issues are the safer ones. They don’t require much mental capacity and they don’t question many of our preexisting beliefs. However, the easy way out causes stagnation, and it takes power away from the people and puts it towards the elites. I have written many articles in this publication addressing this and why our future concerns me greatly.

The Metaverse, to give an example, is another step down this road, leading us to a point where we become indistinguishable from the humans in “Wall-E.” It would be in our nature to opt into a virtual life where the real world and all its complexities and faults are just sources of noise we can turn down. Yet, ignoring these problems will only make them worse. We saw this in “Don’t Look Up”, where the humans either ignored the comet or trusted the corrupt elites to save them. I hate to spoil the movie for you, but let’s just say humanity did not learn anything and instead stayed stagnated.

Because of this, I am going to suggest a wild idea and say that we should not let our world be destroyed by climate change, nuclear war or authoritarianism. We should respect the democratic system our country was founded upon and demand better from our media. We need to force ourselves to think through complex issues and arrive at our own conclusions. If we can do this, then we may just be able to keep ourselves alive for another century.