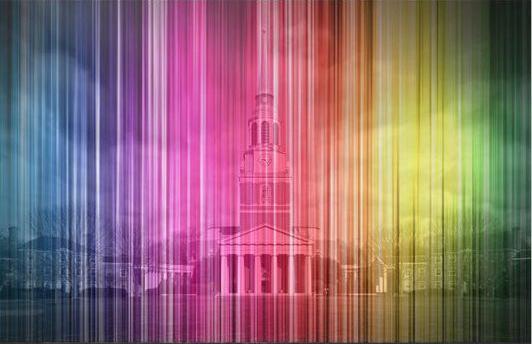 Over 100 people packed into a crowded classroom in Greene Hall Tuesday March 1 at 6 p.m. to hear five students of varied gender, racial and sexual identities share their experience as minorities at Wake Forest.

The panel of students spoke out to their peers as part of an event called “Out at Wake,” hosted by the LGBTQ Center.

Nehemiah Rolle, a Wake Forest fellow in the office of the Provost and the moderator of the discussion, said he hoped the discussion would help educate those unaware of the challenges LGBTQ students face at Wake.

“I want students to lean into discomfort and challenge their assumptions about different groups on campus,” he said. “I want this space to be a first step in a campus-wide commitment to make Wake a safe place for LGBTQ students.”

Attendees at the event leaned forward in their chairs to listen as Rolle engaged the panel with deeply personal questions about their journey as members of the Wake Forest community and as individuals struggling to understand their own identities.

“I decided to live in a single room my sophomore year because I was so scared of living with someone who was transphobic or homophobic,” said junior Danny Benitez, one of the panelists and an openly transgender student. “People would act surprised and confused every time I used the hall bathroom, and that was hard to deal with.”

The five panelists discussed at length how different organizations on campus helped them recognize and embrace their identities.

Panelists Millie Perez, Sammy Moorin and Jordan Monaghan shared their stories about how coming “out” to their respective sororities and fraternities made a positive impact on their Wake Forest experience.

“I knew Wake Forest was a southern, preppy and conservative school,” Moorin said. “I thought I was going to be straight for four years. My impression didn’t change until I joined a sorority. My biggest support comes from them — they want to be as educated as they can to help and support me.”

In fact, most of the students frequently reiterated that once they had come “out” to their friends and peers, they felt reaffirmed and mostly comfortable with their identity at Wake Forest. All of the panelists agreed that Spectrum, a student-run organization promoting understanding and acceptance of the queer community on campus, proved immensely helpful in making them feel safe and welcome on campus.

When asked how students can support their LGBTQ friends, Perez told the rapt audience to avoid focusing on gender or sexual identity as a defining trait.

“Our sexual preferences are just one part of our identity,” she said.

Benitez, who prefers to be referred to by the pronouns they, them and their, said misunderstandings can happen between allies and LGBTQ students.

“Being an ally for a transgender person is standing up for them when they’re not there,” Benitez said. “You can fight for gender neutral bathrooms, housing and other things.”

The panelists said Wake Forest has been changing for the better in its treatment and recognition of LGBTQ students, but that progress still needs to be made.

“Visibility [of the queer community], education and discussion are key,” said senior Tyler Holllifield, another of the panelists.

Rolle, the moderator, concluded the panel by asking each student for a message of hope and support for someone at Wake Forest. Most of the panelists suggested that those struggling with their identity should talk to someone and encouraged them to embrace their individuality. Perez, instead, offered advice to the heterosexual community.

“Heterosexuals — we’re not all attracted to you,” she said to laughter and applause.

After the conclusion of the discussion, students expressed interest and concern over the treatment of their LGBTQ peers.

“I think panels like these are really important,” said Danielle Mozingo, a freshman attendee. “It makes me want to be more open-minded and conscious of others’ sexuality and identity.”

Matthew Simpson, a senior and the organizer of “Out at Wake,” said he was pleased with and grateful for the large turnout at the event.

“Wake Forest can seem very ‘don’t ask don’t tell’ sometimes,” he said. “But once people talk to each other, they find most students are accepting and open about LGBTQ issues on campus. The fact that so many people are willing to engage in discussion with their peers about this subject speaks well to Wake Forest as a school and to the future of LGBTQ students here.”