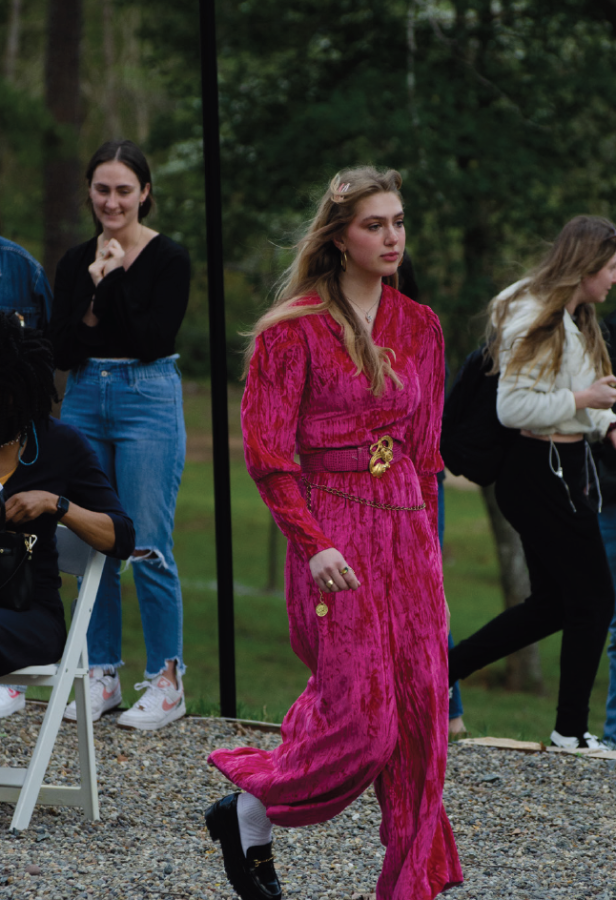 A model struts down the runway during the show.

On April 8, the Wayward Fashion club hosted the Wayward Funkadelic Fashion Show, its second annual fashion show. The show, which took place at the Southeastern Center for Contemporary Art (SECCA), featured secondhand and vintage clothing from the ’70s.

Wayward Fashion is a student-run club started by sophomore Alyse Harris and junior Virginia Wooten during the winter of 2020. The club promotes sustainability and self-expression through fashion and informs the Wake Forest and Winston-Salem communities about secondhand shopping.

“It’s good for the environment as well as your wallet to buy secondhand and support small businesses,” sophomore and member of Wayward Fashion Taylor Schutt said. “By buying from fast fashion brands such as Shein and Zara, you’re supporting fast-fashion businesses, and unfortunately, it’s pretty unethical.”

“A lot of fashion nowadays is unsustainable, and the clothes are really cheap,” freshman Mary Caroline McCormack said. “You can get them fast and wear them once or twice. But [the clothes we showed] are from the ’70s — about 50 years ago — and they’re still around. Not a single piece of clothing had a tear or rip. It shows that buying sustainably sourced things can [make them] last so much longer.”

In addition to fashion, the show also featured performances from two Wake Forest-based groups. Deacon Dhamaal, an Indian dance troupe, performed a dance to Indian cultural music from the ’70s, and Fifth Son, a band comprised of Wake Forest students, performed covers of popular songs from the ’70s.

After the show, there was an art market where those in attendance could purchase clothing seen in the show as well as other pieces from the featured stores. Student artists also had the opportunity to sell upcycled clothing and accessories, paintings, prints and other types of art.

Compared to their first fashion show that took place outside of Scales Fine Arts Center in the spring of last year, Wayward Fashion’s shows have grown significantly. They moved to a larger venue, partnering with SECCA to allow space for more attendees, and extended the number of participants and outfits that were showcased.

“[The show] this year was much bigger,” Schutt said. “Because of COVID-19 the year before, it was hard to get people to participate and come. There were a couple of performances, but I would say it was a little less organized than this year. This year, we had over 40 models compared to last year when we had 20 or 30. More people showed up because we had it at SECCA, which allowed more people in the Winston-Salem community to come.”

She continued: “We did a good job last year, but this year I feel like we really improved. We not only showed sustainable fashion, but we did a good job of promoting that it is cool to wear old things in a creative way. We wanted to show that you can be creative with your clothing and use it freely to express yourself.”

Wayward Fashion continues to spread its message on campus and in the Winston-Salem community.

“We hope that the students that came spread the word,” Schutt said. “My parents were there; adults and families were there. We hope that they saw that they could bring [sustainability] into their lives and show other people that it’s good to shop secondhand.”

To learn more about Wayward Fashion, visit their Instagram.