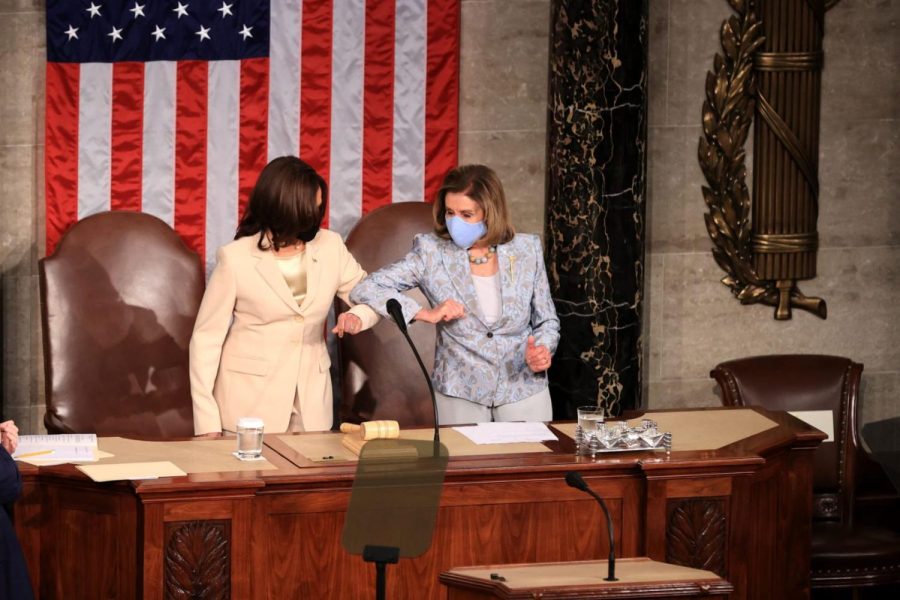 Kamala Harris and Nancy Pelosi sat behind Joe Biden at the dais of both of his addresses to Congress. It was the first time in history that women held both constitutional offices that entitle someone to sit behind the president.

In recent years, there has been much to celebrate concerning the gradually-eroding underrepresentation of women in U.S. politics. The 2020 election saw the first Black and female politician, Kamala Harris, elected to the office of vice president. Judge Ketanji Brown Jackson’s recent confirmation will bring the number of women serving on the Supreme Court up to four when only six have ever breached that judicial position. She is also the first Black woman to be appointed to the nation’s highest court. At 144 seats, women currently hold more congressional seats than at any other time in U.S. history.

That number means that 26.9% of our Congress consists of women — a percentage that deserves to be higher. Women hold 47% of the parliamentary seats in Sweden, and they are working alongside newly elected Prime Minister Magdalena Andersson, the first female leader in the country’s history.

Through 246 years of history, we have never elected a woman to lead the United States. In 2019, Sanna Marin became the third woman to become elected as the Prime Minister of Finland.

Using Sweden and Finland as a point of comparison regarding gender inequality in politics is not doing the United States any favors, as Nordic nations are known to be some of the most progressive in the world. There are many other governments I could hold next to our own that would make the celebration of the dreadfully slow thawing of gender inequality in U.S. politics easier.

But Andersson and Marin are two of the most important people in the world right now, especially in the wake of current events. Russia began executing an invasion of Ukraine last February; an act of aggression that much of the world has condemned. World leaders have also been given cause to reconsider just how dangerous and erratic Russian President Vladimir Putin and his military arsenal are. Subsequently, debates on whether Sweden and Finland should join the North Atlantic Treaty Organization (NATO) — which was initially assembled during the Cold War in the hope of uniting European countries in collectively combatting external threats — have begun heating up. Many are in favor of Sweden and Finland submitting membership bids, which would be reviewed during the alliance’s upcoming summit in June of this year.

Thus, Andersson and Marin find themselves in pivotal discussions with conclusions that could hold global implications. Wherever those discussions lead, seeing two women at the forefront of them is refreshing.

Andersson landed her historic leadership position last November by way of an election that spoke to her determined nature. As the primary nominee for the Social Democratic Party, Andersson won, forfeited and then once again won the leadership position in the time span of a mere six days. NPR reported on the tumultuous election, citing Andersson’s very temporary resignation of the prime minister title as the result of her party’s budget being voted against. This led to her two-party coalition experiencing a falling out when the Green Party left Andersson’s newborn government.

While Andersson was then forced to temporarily step down, this development ultimately failed to deter her, as she then won the election for a second time, putting her at the head of a one-party government.

Andersson’s courageous tenacity in stepping into the prime minister role despite the friction along the way is more than commendable. Becoming the first female leader of Sweden is a landmark event for the nation and something the United States should observe with internal change in mind. Andersson’s election represents something America lacks: the willingness to discard antiquated beliefs that lead to gender inequality in politics.

In Finland, Marin has held her prime minister role since December 2019. She is the third woman to take up the mantle and the youngest leader in her country’s history. Finland elected its first female prime minister in 2003 and its first female president in 2000. The majority of Marin’s cabinet — 12 out of 19 members — are women, a fraction that would surely confuse some Americans. It is incredible to see both Marin and Andersson upset gender norms in politics.

These two prime ministers set their nations’ progress in championing gender equality apart from that in the United States. Looking past the social factors that play into sexism within the political system, it is nearly impossible to find any logical reason why such progress is so stunted in America. Future elections, pertaining to all amounts of power and standing, in the United States should more fairly welcome women into positions that they have carried the qualifications for. Women have brought these qualifications for an objectively long time and deserved these positions for a frustratingly long time. It is time that the United States recognizes that.