The hit Netflix show presents minorities and cultures without controversy 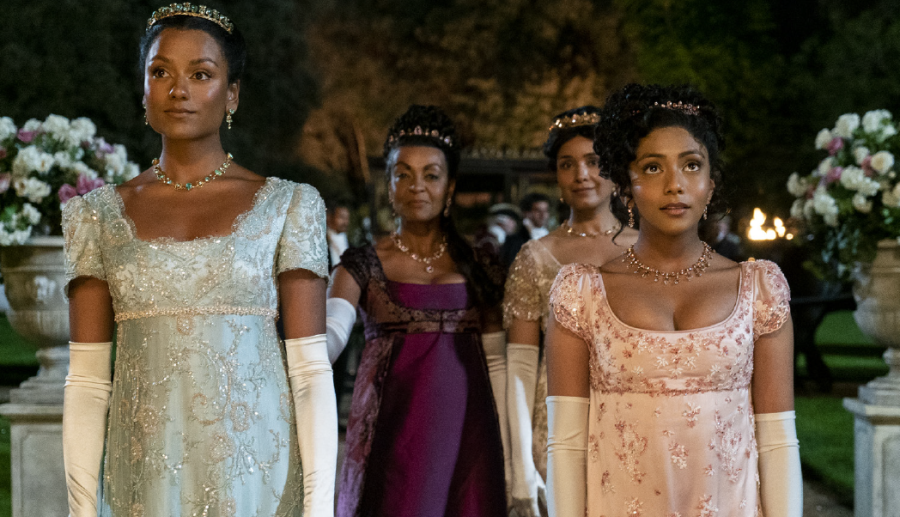 'Bridgerton' allows minorities to gain a place in old English society, representing those who have not been as visible as others.

Dresses, balls and longing looks all create the intoxicating atmosphere of a regency drama. Netflix’s “Bridgerton” brings all three to our screens, following the romantic pursuits of a viscount’s eight children in upper-class English society. The second season of “Bridgerton” has captivated fans with another whirlwind love story.

Along with its success, a wave of critics has returned pointing out the show’s historical inaccuracies. Period pieces about the English regency notoriously lack diversity because their featured social circles historically included only white people. Unless they appear as servants, characters of color are glaringly absent.

“Bridgerton” subverts this norm by practicing seemingly color-blind casting. Many significant characters like Queen Charlotte, Lady Danbury — and even the main character Daphne’s love interest — are portrayed by people of color. According to writers, this alternate reality without racism is born of King George’s love for Queen Charlotte — he integrated society, so they could wed. Her character is inspired by the royal family’s real-life descendent who historians speculate had African ancestry.

The show most recently paired the family’s eldest sibling with Kate Sharma, who, along with her sister Edwina, travels from Bombay for England’s eligible bachelors.

Edwina actress Charithra Chandran told “Today” about the importance of dark-skinned women being the season’s most coveted debutantes.

“No one let me forget that I was dark-skinned growing up,” she said. “Whenever we’d go around India, they’d always say…‘She’s pretty for being dark-skinned.’”

Beyond subverting colorist norms, South Asian culture is seamlessly integrated into the plot. The sisters affectionately call each other “Bon” and “Didi”, which mean “sister” and “elder sister” in Bengali and Hindi and are signs of respect between siblings. Kate’s first on-screen words are a Hindi exclamation, Baap Re. Additionally, many bilingual fans applaud the portrayal of accent-switching, a common phenomenon where nonnative speakers of a language hide their accents when talking to native speakers.

Other scenes include the Sharmas oiling their hair — a popular practice among Desi women — and hosting a traditional pre-wedding Haldi ceremony. They sip Masala Chai instead of English Breakfast, and their wrists sparkle with gold bangles.

Should these details have been left out for the sake of historical authenticity? I think not, for more reasons than the interest that they add for the average viewer. Woman after woman has shared heartfelt reactions to finally seeing themselves celebrated on-screen instead of simply being exotic or undesirable.

“Not once was their beauty seen as surprising, their culture seen as odd, their accents overemphasized,” Tik Tok user @fruit.lopes said. “To see them receive such deep, passionate love and attraction was more than beautiful. It was reassuring that we deserve and can receive the same.”

Non-white women and girls deserve to see non-white characters in sweeping gowns waltzing to violin covers of their cultural music. They deserve to see the people who resemble them shine.

People of color existed in Regency England. They must have their trials recounted and stories told, but not every narrative needs to discuss oppression. There is value in creating a fictional world in which they are treated as they should have been all along.