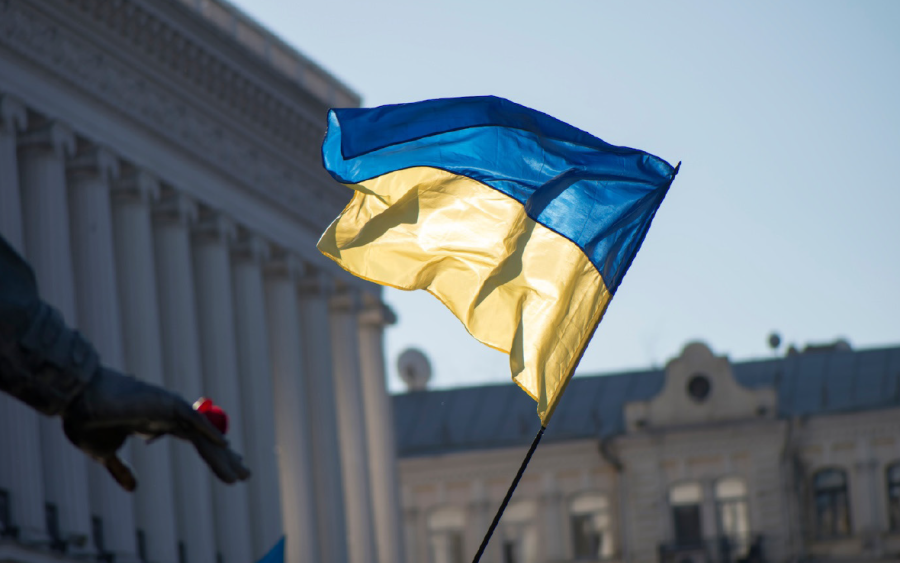 Despite feelings of hopelessness, morale on the Poland-Ukraine border remains strong as volunteers and relief efforts continue to send aid.

The Russia-Ukraine crisis can feel distant from the United States, but during a talk on April 12, Wake alumnus Seth Mischo closed that distance by speaking about his recent trip to the Polish-Ukrainian border.

Mischo is a former airborne infantryman and biomedical engineering student at Wake Forest University School of Medicine. He traveled with Volunteer for Ukraine — a grassroots initiative that funds direct humanitarian action — and treated injured refugees waiting to cross into Poland.

During his talk, Mischo shared many anecdotes and details from his time in Poland. He recalled that lines of people waiting to receive medical care stretched for miles and their injuries ranged from skinned knees to hypothermia and shrapnel wounds. Operations included running two medical centers and delivering about five trucks and 15 double-decker buses of aid per day.

Despite the ongoing pandemic, Mischo’s team worked without masks. He explained that, while under attack, people refuse treatment from faces they cannot see. They completed 36-hour shifts with little rest, covered their vehicles with red crosses to avoid being targeted as combatants and powered off phones to prevent data tracking.

“Any mistake could cost people their lives,” he said, recalling an instance where one leaked photo prompted a bombing.

When asked about the most difficult part of his work, Mischo named helplessness.

“Cars would drive up and men would kiss their kids goodbye and drive away,” he said. “Seeing parents leaving their kids is profound and difficult. In medicine, you can fix the problem, but you can’t just fix something like this.”

Despite these hardships, morale remains strong. Mischo found comradery in Poland, recounting one instance where Polish police released his van from a speeding ticket upon discovering he was a volunteer. He said that Ukrainians are refusing to surrender their homeland, and instead they are raiding city halls and taking up arms against their attackers. He described the insurgency as surprising yet inspiring.

Mischo’s passion for helping those in need comes from a childhood experience. In 2001, Mischo’s family lived 15 miles from the World Trade Center during the infamous Sept. 11 terrorist attacks. Witnessing firsthand the effects of violence against civilians inspired his decision to help in Ukraine.

“I remember saying, ‘Mom, do I have to worry about our house blowing up?’ Imagine that’s your life,” Mischo said during his talk. “I could not stomach sitting here when there are kids wondering if their parents will be alive tomorrow. I am trying to help people living out our nightmares.”

One month after returning, Mischo continues his support and advocacy. He says Ukrainian hospitals need prosthetics — carrying an amputee for long distances is a six-person job, so installing false limbs will allow for independent mobility and will free up resources. Mischo regularly calls prosthetic companies and pressures them to donate. He also encourages college students to participate in relief efforts, citing menstrual products as a specific area of need.

“I empathize with having limited time and money,” he said. “It’s mostly about awareness and finding something to latch on to.”

When asked what else Wake Forest could do to help, Mischo encouraged the audience to stay informed and be wary of false news.

“There is propaganda coming from both sides,” he said. “You’ll hear things on the news that will later get fact checked. It’s not so much for us but for the people fighting.”

As freshman Hannah Elluru puts it, “Many Americans like to take their prior knowledge or perceptions of certain countries and use that to inform their opinion of the current crisis, even if it’s not correct.”

Wake Forest students agree that accurate information is sparse. Some befriend political science majors who are passionate about the issue and spend time cross-referencing sources, but the average student takes any news at face value. Overhearing reports from peers is a commonly cited source of information from students, especially since coverage of the event has diminished since Russia first invaded, but these accounts are often distorted by bias.

To learn more about Volunteer for Ukraine and how to help, visit its website.