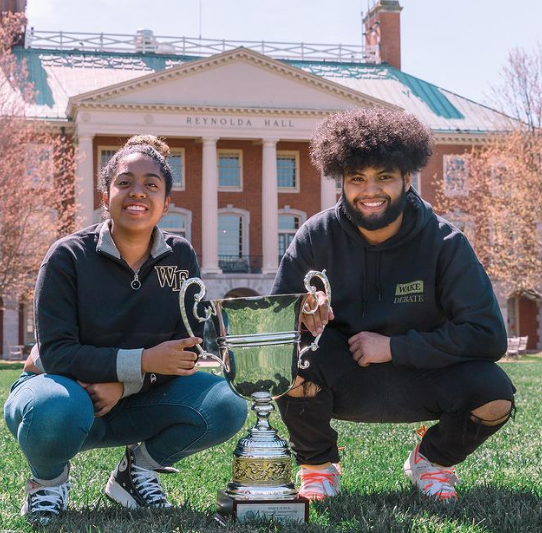 Sophomores Asya Taylor and Dimarvin Puerto won the 2022 Cross Examination Debate Association National Championship on April 13, defeating the University of Michigan in a 9-0 decision in the championship round.

The resolution of this year’s debate was whether or not the U.S. should increase prohibitions on antitrust laws, with each team choosing to defend different examples of that resolution. In the elimination rounds, Taylor and Puerto were debating a negative stance, meaning they were arguing against another team’s resolution and not providing their own.

Because of some last-minute partnership changes, Taylor and Puerto did not know they would be competing alongside one another until two days before the tournament began, making their win “very surprising,” according to Taylor.

Despite not having as much preparation with one another as they may have wanted, Taylor and Puerto had each spent their entire year dedicated to individual training. A week prior to competing in the cross examination tournament, Taylor and Puerto competed in the National Debate Tournament, which is an exclusive national championship for the top-72 teams in the nation. In preparation for that tournament, the two spent their spring break on campus preparing and training with their coaches. While their training came with great sacrifice, for Taylor and Puerto, achieving this milestone made it all worth it.

“[This win] helped me understand that our labor actually produces something,” Puerto said.

Taylor also shared the joy that this win brought Puerto.

“The feeling I had after giving the last speech of that debate is incomparable to anything else I’ve ever experienced,” Taylor said.

“This trophy means a lot to me, obviously, but also means a lot to people on the Wake Debate team,” Puerto said. “Especially because one of our three head coaches is leaving Wake Forest. It was a nice parting gift to have that memory and have that positive high endpoint to her career and our [time with her]. This trophy signifies a lot of hard work, blood, sweat and tears.”

The coach that will be leaving the Wake Forest debate team is Associate Head Coach Dr. Amber Kelsie, who is taking a position at the University of Denver.

This tournament closed out the season for Wake Forest Debate. To learn more about the program, visit their website.