John Billos and Landon Bradshaw were recognized for their achievements in computer science and biology, respectively 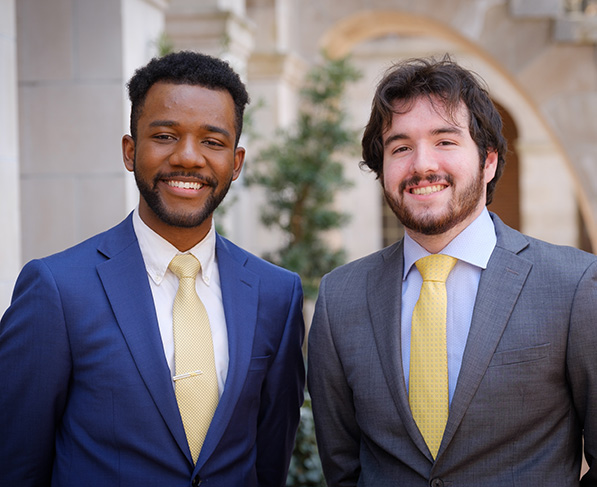 On April 13, Junior Landon Bradshaw and sophomore John Billos were among the 417 college students across the U.S. to receive the Goldwater Scholarship, one of the most prestigious awards for undergraduate students in science, technology, engineering and math (STEM).

Recipients are chosen based on academic merit and excellence in STEM research. The pool of applicants contained more than 5,000 sophomores and juniors studying STEM from 433 institutions, according to a university press release.

The two Wake Forest winners also happen to be close friends. Bradshaw attributed Billos as one of the reasons he applied for the award – one of those being his desire to test his strengths.

“My close friend and fellow Goldwater winner, John Billos, consistently encouraged me to take this next step in my academic career,” Bradshaw said in an interview.

A former Goldwater scholar also inspired Billos to apply for the scholarship.

“Ashley Peake, a 2021 Goldwater scholar [and Wake Forest student], inspired me to apply for this award,” Billos said. “She helped me decide in early 2021 on a summer research program and has mentored me on all things undergraduate research. After completing a summer of research in 2021, I concluded that attending a PhD program is a strong possibility for me and began to look for opportunities like the Goldwater that make entrance to the top graduate programs possible.

The award recognized Billos’contributution to research in the computer science and engineering field, specifically in analyzing large open-source datasets and code, according to a press release.

“Receiving this award is a recognition of my early contributions to the fields of computer science and software engineering through academic research,” Billos said. “It highlights my already completed research projects and potential for future excellence in research.”

For Bradshaw, the award recognizes his exceptional work in the biology field.

“As a member of Biology Professor Dr. Joshua Currie’s lab and a former researcher in Wake Forest’s School of Medicine, the Wake Forest Institute of Regenerative Medicine, and the lab at the German Cancer Research Center in Heidelberg, Germany, Bradshaw is energized by the critical thinking and experimentation that creates new knowledge through discovery,” the press release said.

Billos noted that many Goldwater scholars “go on to be named Rhodes scholars and Marshall scholars and gained admission to the top graduate research programs in the US and the world. It also contains a $7,500 per year monetary amount for educational expenses.”

Both Billos and Bradshaw have high hopes for their future research endeavors.

“I do not know exactly where I want to go with my professional career at this point in my life, but I know I want to work as hard as possible to get there,” Billos said. “If by senior year I am dead set on gaining a PhD and/or applying for a post-undergraduate fellowship, this accomplishment may help me achieve goals.”

“After I graduate, I plan on attending medical school and becoming an academic physician. I hope to develop regenerative medicine therapies in the lab and see them used in the clinic firsthand,” Bradshaw said in an interview with Communications and External Relations.