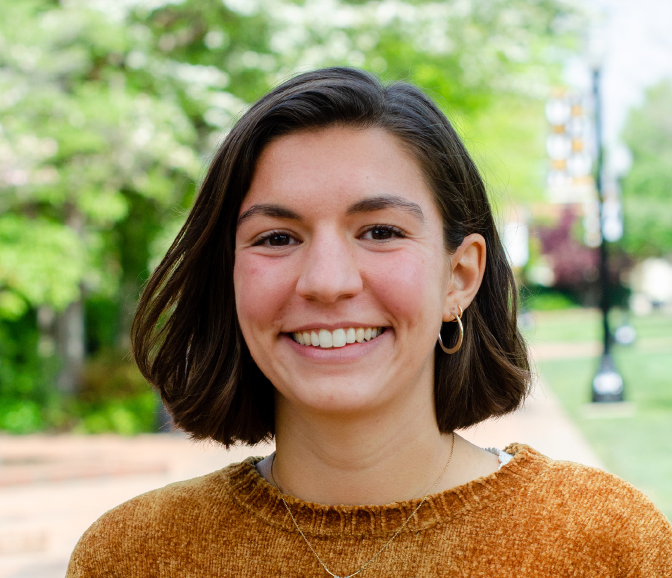 For many, figuring out how to balance all of your interests and figuring out what to major in is a difficult task. For Lauren DeMarco, she decided to pursue all of her academic interests, and she affirms that despite the intense workload, she has enjoyed her time in these various disciplines.

“I’m an English and studio art double major and a Spanish minor. I came into college not exactly sure what I wanted to study, but I kind of just have these three fields that I’ve been interested in. Throughout my life, throughout high school I’ve always really loved reading and writing — which is why I wanted to pursue English.”

“It’s been a really great four years of taking English classes,” she said. There’s a lot of flexibility within the major to take classes that you’re in. [The three disciplines are] all different forms of communication, visual, foreign language, written weaving together.”

During her time at Wake Forest, DeMarco has made fond memories in English classes she took. These classes provided various intersectional approaches to content and also broadened DeMarco’s view on different topics — like Asian American fiction and literature.

“When I took Dr. Barry Maine’s word and image class, we met in the gazebo outside the Reynolda House,” she said. “On a beautiful day in early fall, we would sit outside and discuss the intersection of literature and art. It was all of my favorite things — sunshine, novels, and art — at once.”

DeMarco continued: “As part of Dr. Jessica Richard’s 18th-Century British Fiction class, we took a trip to the rare books room in the Z. Smith Reynolds Library, and it was so interesting to see early editions of the books we had been discussing. Books from that time were much more carefully crafted than our modern novels, and I loved paging through the old books and examining them as works of art.”

“One of my favorite classes I’ve taken within the major was Asian American fiction with Dr. Derek Lee — the books from which I ultimately ended up writing my thesis on,” DeMarco said. “[This class] was kind of a highlight of my online school days. ”

Lee reflected on DeMarco’s time in the course as well as her passion for the discipline.

“She has been a joy to work with over the past two years,” Lee said. “In my Asian American literature class she would get completely wrapped up in certain concepts and historical events and take them in such amazing directions.”

Lee continued: “For example, she read a Ken Liu short story during the last week of the semester and decided to completely change her final essay topic to explore it. It’s usually a bad idea to make such a drastic change so late in the game, but she knocked it out of the park. Lauren writes with such finesse, rigor, and passion. It’s always a pleasure to read her work. She will be greatly missed around the department!”

Outside of the classroom, DeMarco found passion and a bond in the ultimate frisbee club — an organization of which she has been a part for four years. DeMarco is currently one of the captains of the team.

“[Frisbee] is something that has consistently been a highlight of my time here at Wake [Forest],” DeMarco said.

Looking ahead to her post-grad career, DeMarco is excited to be applying the skills she gained from this intersectional approach in her future work — which will begin with a one-year Master’s program in engaged public humanities at Georgetown University.