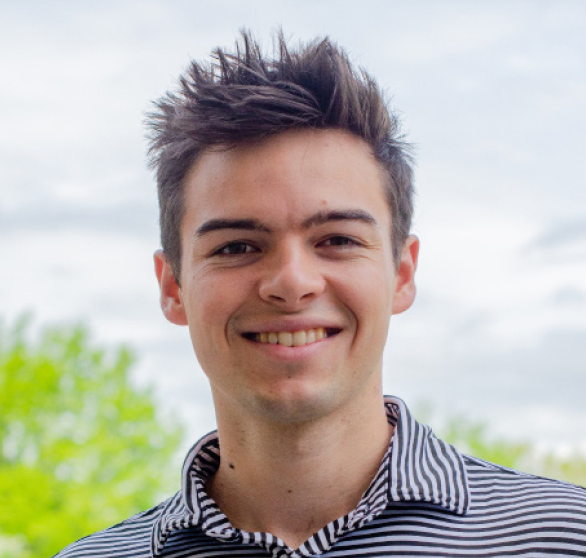 Born in London and raised in Charleston, SC, Eliot Leadem has never considered one single place home other than where his family is. Leadem became a world traveler early in life, and he and his siblings have always shared a love for languages. Although he took French throughout middle school and high school, he took his first German class the second semester of his freshman year with Dr. Alyssa Howards, who inspired him to pursue it further.

Leadem jumped right into the department through a study abroad program in Jena, Germany the summer after his freshman year. Full immersion was challenging when his host parents were native Russian speakers, with German as their second language and English as their third.

“I grew a really great relationship with them,” he said. “Though there was quite the language barrier.”

He described how he drank coffee and ate German bread each morning with his host ‘father’, with whom Leadem bonded over their shared interest in history and learning about familial past.

While his plans for going abroad to the Vienna Flow house during a fall or spring semester were canceled by the pandemic, Leadem returned to Germany the summer before his senior year through the Sanders Scholarship, designed to support promising German students in their ventures abroad. While studying in Berlin, Leadem’s brothers visited him in Europe and he reunited with his original host parents in Jena, who he said made him feel like their own son even years later.

In Berlin, Leadem collected data for his German honors thesis, which he successfully defended in April. His research looked at marketing disparities in the German Ubahn, comparing inner and outer city advertisements which he measured through a coded map he designed with a colleague from the University of Virginia. His experiences abroad solidified his decision to primarily pursue German and relegate his other academic pursuits, such as his political science major and minor in global trade & commerce studies, to lower importance. He described how proud he was to claim the German department, especially for their efforts to host in-person classes during his junior year when the pandemic forced many on-campus interactions online.

“While everyone else was doing online classes junior fall, I was coming to kind of an empty campus every single day to take classes in person,” Leadem said. “I felt very proud of my major decision at that point because I don’t work nearly as well online to do in person and having that ability was something that I don’t think really any other people in North Carolina did.”

During this time, he took some of his favorite literature classes with Dr. Tina Boyer.

“Elliot is without a doubt, one of the nicest and most genuine people I have met.” said Boyer. “I have wonderful conversations with him in and outside of the classroom. It will be a shame to see him graduate because we will all miss him, but at the same time, I am absolutely thrilled because his future looks so bright.”

In addition to his coursework, Leadem is the president of Delta Phi Alpha, a senior member of Chi Psi and was actively involved in various campus events and traditions such as Hit the Bricks and Wake N’ Shake. He is also an avid sports fan and player and has run an active Twitter account about Wake sports since 2013. Reflecting on some of his favorite memories in college, Leadem said that he never missed a soccer, football, or basketball home game, and he couldn’t decide between going to the ACC championship in Charlotte, beating Duke in basketball last year, or beating UNC this year as a favorite memory.

After graduation in May, Leadem plans to move to New York, NY where he will begin work as a client management associate at Coleman Research.