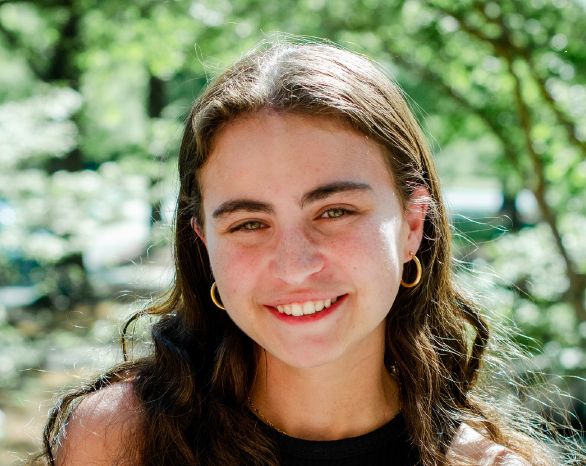 Although she is now an accomplished philosophy major, Liat Klopouh didn’t know she wanted to major in philosophy until she attended college. Hailing from Baltimore, MD, Klopough initially intended to follow in the footsteps of her parents and major in biology. Although she decided that that academic path wasn’t for her, she loved the analytical nature of science and wanted to be able to apply that to writing. This led her to try out a plethora of classes at Wake Forest.

Klopouh’s first academic exposure to philosophy was in a class she took with Dr. Adam Kadlac. This class was what solidified her decision to major in philosophy, and she worked with Kadlac on her honors thesis.

“I have been very lucky to have Liat in three classes and to supervise her honors thesis this year,” Kadlac said. “It has been a privilege to watch her intellectual development over the last four years. I’m sure that she will be successful in whatever she decides to do.”

Klopouh’s interest in philosophy was also initially sparked by a love for writing. Her parents, who immigrated to the United States from Russia, always emphasized the importance of writing well and being grammatically correct. She recalls her father sitting with her as she did her homework and helping her write correctly and speak correctly. These memories stuck with her and impacted her time at college.

The appreciation she has developed for philosophy has transcended into external aspects of her life. As a student ambassador for the Program for Leadership and Character, Klopouh is able to see how philosophy permeates the program’s ideals. Moreover, as an economics minor, she has noticed how many theoretical concepts are applicable when looking at the world through an economic lens, or from a perspective of individual character. In particular, the ethical aspect of philosophy has impacted Klopouh most.

“I’m big on character and virtue, and understanding those concepts, and ethics helped me frame that,” Klopouh said. “That stemmed out into Kantian ethics and ancient Greek philosophy.”

Klopouh expressed gratitude to Dr. Emily Austin, with whom she took classes on ancient Greek philosophy.

Klopouh credits her understanding of ethics to classes she took on the subject with Dr. Christian Miller. She said she can apply concepts learned from these classes to aspects of her everyday life, such as her on-campus relationships with both peers and professors.

“Liat was one of my favorite students these past four years,” Miller said. “She has a deep interest in ethics and social justice, and that carried over to my ethics course … She is one of the most hard-working students I have had, as well as being so conscientious and kind.”

After graduation, Klopouh plans to work in Washington D.C. at Wiley Rein Law Firm as a paralegal. She also intends to further her interests in philosophy, particularly ancient Greek philosophy. She is fascinated by how philosophy allows her to uncover answers to questions as she hits different stages in her life, and she discerns how she would answer a lot of the philosophical questions she was asked as a freshman very differently now.

“Philosophy can go on for so long, and I think that’s the beauty of it,” Klopouh said. “I don’t ever want to stop with it or stop thinking about these things.”