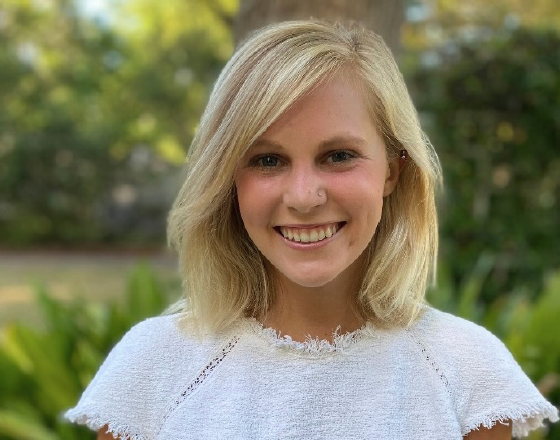 Maggie Fox always wanted to go to law school, and her experiences at Wake Forest only reinforced that aspiration.

“I think especially after the 2016 election, I really got more interested in political affairs,” Fox said. “And so I thought that was going to be that my law school path was something more related to workings of government, and policy reform, that kind of thing. It was honestly over the last two years that I really got a more specific focus into criminal justice reform.”

Growing up in Conway, SC, Fox’s parents helped inspire her passions, as they both pursued careers as public attorneys.

“My parents have definitely been a huge influence, especially in pursuing a liberal arts education as they’re both public attorneys,” Fox said. “They’ve always been really encouraging of exploring different disciplines like English, history and sociology and that definitely guided my choice of wanting to go to a smaller liberal arts school like Wake Forest.”

Fox received a Stamps Scholarship to attend Wake Forest, a scholarship that “is awarded to entering first-year students who demonstrate outstanding academic achievement, a high degree of intellectual curiosity and scholarship, exceptional promise in leadership, service and social responsibility, perseverance, character, integrity, and innovation,” according to the Stamps Scholarship website.

Fox has embodied the character of a Stamps Scholar through her exemplary drive in her classes. During her time in college, Fox excelled in classes on constitutional law, civil rights and civil liberties; and judicial politics, a class that encouraged her to pursue a minor in sociology.

“I was able to pick up a sociology minor, where I became especially interested in abolition work and criminal justice reform,” Fox said. “One thing I’ve loved about the politics major is that it’s given me the flexibility to take classes in a lot of different departments as well.”

Fox took a class related to race, racism and racial capitalism from one of her favorite professors, Dr. Hana Brown, who praises Maggie for being an exemplary student and scholar.

“Maggie is such a strong student that I knew her name from other faculty and students long before she ever enrolled in one of my classes,” Brown said. “In class, she has routinely surpassed my already high expectations. She is sharp, intellectually curious, and always one step, or more, ahead of the research we read and debate in class. She embraces challenges and is deeply motivated to use her social science background to advance social justice.”

Fox also excelled in her Division II English course, taught by professor Meredith Farmer, in which she received the D.A. Brown Award for Excellence in writing.

“It ended up being a class I really loved … it was on detectives and detective fiction,” Fox said. “I think [Professor Farmer] was a professor who really believed in me and my writing abilities, That was a class that really strengthened my writing more than anything else. I think it’s a class that taught me more than anything else at Wake Forest.”

“Maggie is a wonderful student who wrote a beautiful essay about Herman Melville’s ‘Benito Cereno’ and its layered way of calling out racism in the antebellum United States — and in readers today,” Farmer said. “Her paper was impressively researched, carefully crafted, and genuinely compelling. But what matters even more is that Maggie knows how to build not just an argument, but also a mood, which I hope will serve her well as she starts her career.”

In addition to being a dedicated student, Fox spent all of her years at Wake Forest tutoring with organizations like Voices and the Student Association for the Advancement for Refugees (SAFAR).

At the beginning of her sophomore year, Fox also had the opportunity to develop her own research project through a Richter Fellowship. She centered her research on the Dutch criminal justice system. Although she did not have the opportunity to go to Amsterdam to pursue this research due to the pandemic, she completed the project online.

“They have a system that is just really focused around rehabilitation and completely centered away from detaining people for long periods of time in prison, which is entirely different from what we do here in the United States,” Fox said. “I developed a project where I would go to Amsterdam, and talk with different people in the criminal justice system, like judges, attorneys, people who worked at the prisons and academics … and see what lessons we can learn from that here in the United States.”

After college, Fox will attend the University of Virginia for law school and plans to pursue criminal law.

“I really want to do abolition work,” Fox said. “I don’t know whether that looks like doing advocacy work and working as a public defender or working with more community organizing as a litigator. I don’t have it all laid out, but those are definitely things that I’m still interested in pursuing.”