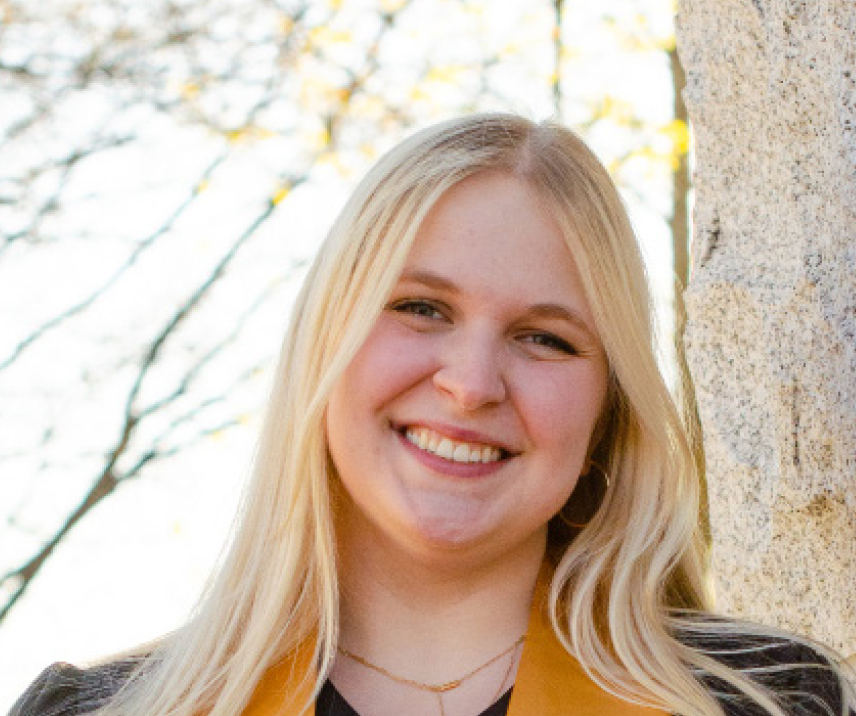 Caroline Kernell is a highly-accomplished Biochemistry & Molecular Biology (BMB) major hailing from Houston, TX. With advice from her a cappella director Kate Hanson — and a semester of experience in Dr. Lindsay Comstock-Ferguson’s lab as a research assistant — Kernell declared her major early in the fall of her sophomore year.

“Caroline has been a joy to work with for the last three years as a student in my research lab,” Comstock-Ferguson said. “After joining in her freshman year, she took on a challenging project and learned a lot of experimental techniques quickly.”

While Kernell was always set on science, technology, engineering and math (STEM), her divisional requirements proved to be impactful. Inspired by her Christian a cappella group, Minor Variation (MV), and an amazing experience in Dr. Ken Hoglund’s Intro to the Bible (REL 102) course, she added a religion minor.

“For a long time, I [didn’t] like anything else besides STEM, but I really liked my religion classes because they’re interesting in a different way,” Kernell said.

She added that conversations with former MV Chaplain Anna Crumpler solidified her plans, and she was glad she had the opportunity to take so many interesting courses across so many different departments in her four years.

Academics were Kernell’s primary focus, and that focus earned her recognition as a Thomas E. and Ruth Mullen scholar — part of the Carswell Scholarship Program for returning students — as well as membership in Omicron Delta Kappa, the Mortar Board Honors Society, and Phi Beta Kappa. Kernell has also worked as a supplemental instructor and tutor for the Chemistry Department, and as a private tutor in chemistry and biology on and off campus.

Kernell also served as president of Wake Saturdays, a service organization in which students help houseless people downtown. Kernell is also a member of Alpha Delta Pi and was excited to share about her work as Fraternity and Sorority Life ambassador and a GRC (a sorority rush counselor) for two years.

Kernell says the arts have been essential to her life at Wake Forest. An active member of the Wake Forest Chamber Choir for all four years, Kernell performed under Dr. Brian Gorelick before his retirement and helped Dr. Christopher Gilliam navigate his new role after he joined the department in 2020. She is looking forward to the choir’s upcoming tour of the East Coast. Gilliam spoke highly of her character.

“Caroline has a joyful spirit and has been the backbone of Chamber Choir for her years at Wake Forest,” said Dr. Gilliam. “She is an exceptionally hard worker, a joy to be around, and a beautiful singer, and she will definitely be missed.”

When asked about her best decision during her time at Wake Forest, Kernell proudly explained that MV was the most important activity to her. She served as the treasurer and business manager for the group her sophomore and junior years, during which time MV released three records between 2018-22. Kernell was featured as a soloist most recently on ‘Run to You’, MV’s newest album, which will be released on April 29. She recalled how grateful she was to travel to Durham and Graham, NC for week-long recording sessions in 2020 and 2022, respectively.

“If I had to quit everything else at Wake Forest except one thing, I would stay in MV because MV is the best,” Kernell said.

After forty medical school applications, Kernell will be moving back home to Texas to attend UT Southwestern Medical School to pursue surgery. Before orientation begins in August, Kernell will return to the lab of the postdoctoral researcher she worked for as a freshman.

From the “tomfoolery that ensued in the lobby of Winston” before taking her BIO 114 final to learning about the chiral anatomy of ducks in Organic Chemistry II (CHM 223), Kernell will leave Wake Forest with countless, priceless memories of her best four years thus far.