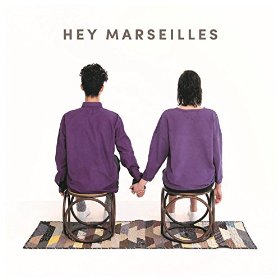 The concert was part of their current tour to promote their new album, a self-titled LP which was officially released just a week before the concert.

The concert began regularly enough with each member stepping out onto the stage and assuming position with their respective instrument.

It seemed like a relatively lackluster entrance until, about a minute into the first song, Hey Marseilles displayed what sets their music apart from the rest.

Just before the chorus to the song “Crooked Lines” set in, bassist Samuel Anderson laid down his guitar and picked up a cello hidden just to the side of the stage.

Meanwhile, keyboardist Jacob Anderson grabbed his viola, and the two brothers began to play in earnest.

Throughout the rest of the night, there was a common theme of instrument switching on the fly.

At one point, the lead guitarist traded in his pick for a trumpet and stole the show in a fantastic way.

At other points, the Anderson brothers supplied heartbreakingly beautiful orchestral accompaniments to upbeat, indie-pop songs such as “My Heart” and “North And South.”

Each artist is multi-instrumental, leading to a kind of structured chaos that made the already impressive show that much more exciting.

After the first couple of songs, the band took a short break while lead singer and band frontman Matt Bishop asked the crowd how they felt about the newest album so far.

“We knew we were taking some risks. We definitely changed some things up, but we’re so excited to be here sharing this new music with you lovely people.”

It certainly is true that this album represents a change for the band.

They have been performing together for almost 10 years and made a lot of progress from the Seattle scene to the indie scene at a national scale.

However, for this album they wanted a new sound.

Previously known for their versatility, variety of instrumentation, and self-described “folkestra” sound that dominated their first two albums, the group wanted to make some changes to appeal to a wider audience with this latest release.

Having recorded their initial albums, “To Travels and Trunks” and “Lines We Trace” on their own in a Seattle home-turned-recording studio, this time the band decided that they wanted to change up their sound.

As put by band member Jacob Anderson in an earlier interview: “We really wanted to challenge ourselves by simplifying the songs and trying to make them still sound like us but making them sound like us in a way that would appeal to a lot of people … because three-minute accordion solos have a fairly niche market.”

Wanting to trade some of their sweeping orchestral arrangements for a more pop and listener-friendly style, the band partnered with Anthony Kilhoffer, a Grammy award winning hip-hop producer who helped create Kanye’s “Yeezus” and “808’s and Heartbreak.” The result of this collaboration: the newest LP does not feature any accordion nor three-minute-long instrumentals, but instead focuses on the strength of the band’s string section while introducing pop and hip-hop beats to supplement the sound.

This self-titled album serves as a sort of rebirth for the band.

Building upon years of experience and now armed with an incredible producer and a new sound, Hey Marseilles is excited for what the future holds.

For now, all three of their excellent albums can be found on iTunes or streamed through Spotify.