Wake Forest falls to Maryland, is eliminated from the NCAA Tournament

A late-inning comeback by Maryland stunned the Demon Deacons 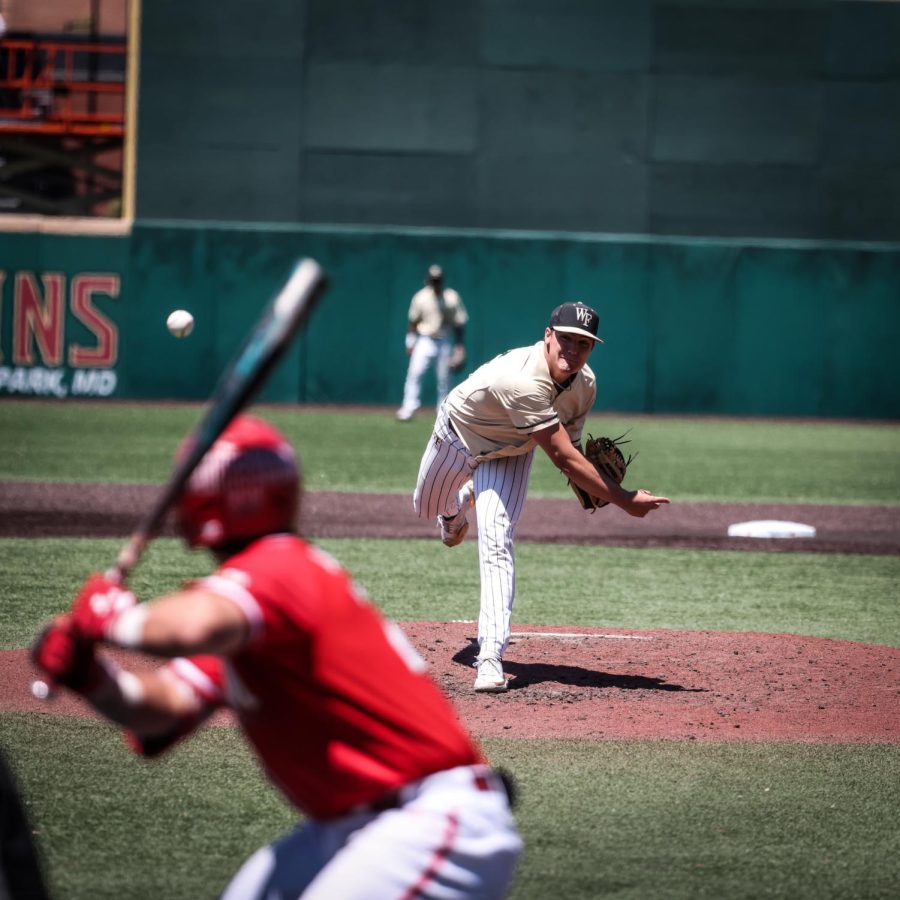 Midway through the elimination game between Maryland and Wake Forest, Bob “Turtle” Smith Stadium was still humming with noise, but it was not the sound of jubilation. The home fans in College Park were pleading with their team to make a comeback. So they did, riding a six-run eighth inning to stun the Demon Deacons with a 10-5 loss, bouncing Wake Forest from the NCAA Tournament.

“We had this game right where we wanted it and just couldn’t close it out,” Wake Forest Head Coach Tom Walter said after the loss. “Between this game and the UConn game, it’s gonna hurt for a while.”

After a solid first inning by sophomore starting pitcher Teddy McGraw, Wake Forest’s bats got hot early. Following a leadoff double by freshman Tommy Hawke, redshirt sophomore Pierce Bennett knocked in the first run of the game with a double of his own. Then, two at-bats later, redshirt junior Brendan Tinsman hit an RBI double to bring home Bennett.

In the next half inning, though, Maryland came right back. With a man on first after an error by sophomore Brock Wilken, Maxwell Costes hit a shot to deep center field to tie the game at two. McGraw was able to get through the rest of the inning with the score tied.

That score remained until the bottom of the fifth, mostly due to savvy pitching from both sides. With two outs, that changed. To retake the lead, Bennett struck a ball that just crept over the center field wall, igniting a Wake Forest team that had settled into a bit of a rut after its first inning scoring.

In the bottom of the sixth, the Demon Deacons struck again. A ball that at first appeared to be caught by left fielder Bobby Zmarzlack snuck just over his glove for a two-run home run by Wilken, giving Wake Forest a 5-2 lead. McGraw’s day on the mound ended after the sixth inning. The sophomore put together a really strong effort, only allowing four hits and one earned run in six innings.

In the top of the seventh, with sophomore No. 4 starter Seth Keener on the mound for the Demon Deacons, Maryland did not roll over. In the first at-bat of the inning, Kevin Keister launched a ball to left field that went over the fieldhouse, lowering the Terrapins’ deficit to two runs. Keener was able to power through the rest of the inning without giving up any additional runs.

In the following inning, Maryland got on Keener again. With two outs and a man on base, Zmarzlak ignited the crowd at Bob “Turtle” Smith Stadium with a two-run home run over the left field fence to even the game. With those three runs allowed over two innings, Walter brought in graduate Gabe Golob. The Terrapins did not stop there. With a runner on first, Luke Shliger hit a deep drive to center field, bringing the runner all the way home, and giving the team their first lead of the day. Then, on the next at-bat, Chris Alleyne hit a deep ball to center field, except this one went over the wall for a two-run home run, extending Maryland’s lead to three runs. To cap off the scoring in the six-run inning, Tony Schreffler doubled down the right-field line, giving the Terrapins a 9-5 lead going into the bottom of the eighth.

In the top of the ninth, Maryland added an insurance run on a solo home run by Ian Petrutz. But, that run proved to be unnecessary, as relief pitcher David Falco Jr. put the Demon Deacons away with three straight outs to win the game.

With the loss, Wake Forest is now out of its first NCAA Tournament since 2017 and will have to wait until next season to take another crack at pursuing a championship.

After the game, nearly the entire team was seen embracing each other out on the field. Nearly all of those players will be back next season. For redshirt sophomore Adam Cecere, that’s something to be excited about looking ahead.