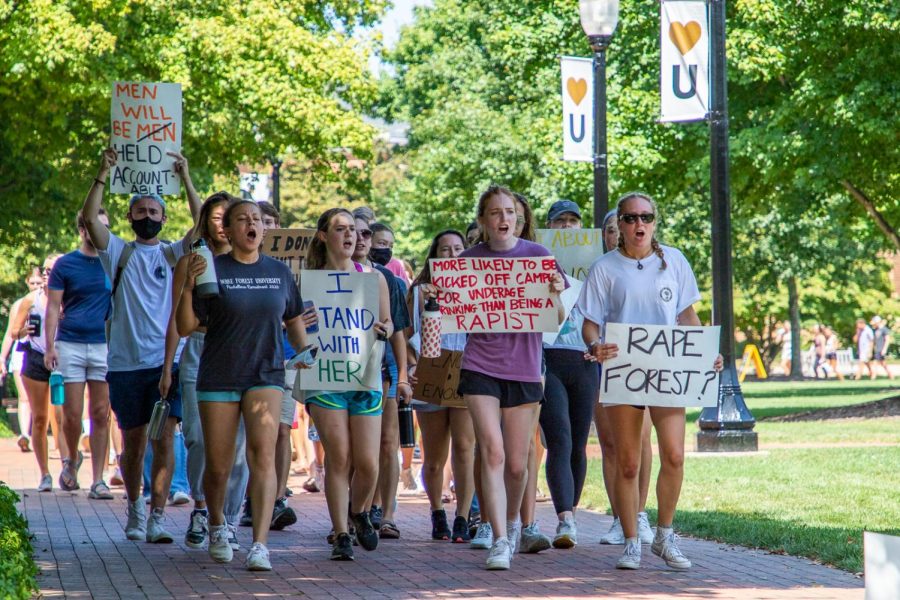 On August 28, hundreds of students marched around Hearn Plaza demanding accountability from university administrators. We covered the protest and its fallout extensively in the spring semester.

This past year, we have redoubled our efforts to bring engaging, intentional, and groundbreaking content to our readers. As such, we created the special reports section, so there is a one-stop shop for all things hard-hitting. We went in-depth on major events and trends at Wake Forest, such as a fertilizer fire that occurred near campus, a protest calling attention to sexual assault (and, inadvertently, to a culture of racism on campus), and a housing crisis for international students. A report on the housing crisis actually inspired the administration to change its course and offer winter housing for international students.

Our coverage on the sexual assault protest was the second most viewed story of all time on our website with over 6,000 views, and a story about sexual harassment and fraternities (through the lens of a developing news story), received 4,500 views, making it the ninth most-read story of all time. In fact, a whopping twelve stories from the top 25 all-time reads are from this academic year. This tells us that we are creating more engaging content and advertising that content better.

One of the things that comes with engaging content is recognition outside Wake Forest. Local reporters retweeted our accounts as we covered a massive fertilizer fire. The Winston-Salem Journal also quoted our editorial on the university’s response to the fire, and the Greensboro News & Record actually used a quote from the editorial in its headline. Additionally, our multimedia managing editor was invited to speak with Elon News Network about the fire. As a result of our reporting, our reputation in the community increased tremendously, to the point where nearly every student and professor we passed thanked us for our work to cover the fire. Oh, and we won a Best of SNO award for our coverage.

Recognition does not always have strictly positive consequences, though. This spring, a tweet from a Wake Forest Medical School student was shared widely by the Twitter account Libs of Tik Tok. We covered the event through a news story  (our current number two most-read story of all time) and an op-ed written by sophomore Opinion Editor Sophie Guymon (no. 6 all time).

Guymon’s piece (and photo) was used extensively in a Daily Mail article, and both aspects of our coverage were quoted by Fox News. All of this culminated in the op-ed, which was mistook for an editorial, being plastered on a graphic next to Tucker Carlson. Backlash against our writers was swift, and both Guymon and News Editor Christa Dutton, who wrote the news story, received hurtful and even threatening messages via email. That week, we wrote an editorial condemning online harassment and received training from our adviser on how to work on in the face of hateful comments. We ended up as better journalists for it.

Our coverage this year took us to a lot of places, from on-the-ground reporting in the shadow of a chemical fire to the Tucker Carlson show (though we were never invited). We are excited to continue our coverage next academic year.