Dobbs v. Jackson is a nightmare for bodily autonomy

The Supreme Court's decision will put people in danger 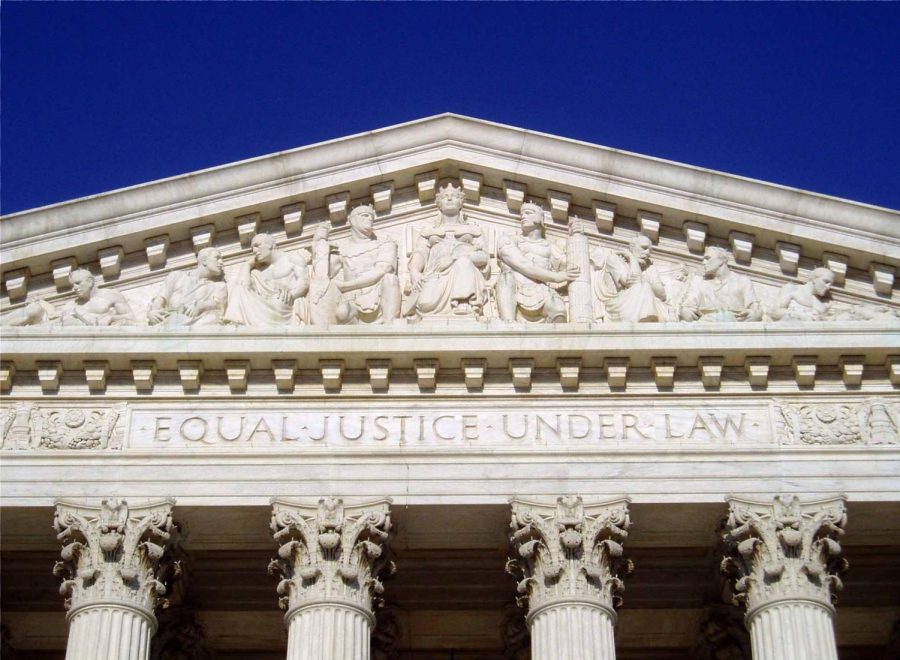 The West facade of the Supreme Court building, which faces the National Mall, reads "Equal justice under law." Natasha Heisenberg writes that the Court has not lived up to this motto.

On May 2, a novel leak of Supreme Court Justice Samuel Alito’s draft opinion overturning two landmark abortion rights cases, Roe v. Wade and Planned Parenthood of Southeastern Pennsylvania v. Casey revealed to many Americans that their worst fears would soon be confirmed. Millions anxiously lay in wait for over a month, as restlessness grew and pervasive feelings of powerlessness paralyzed some who understood the gravity of the decision.

After the confirmation of Justice Amy Coney Barett gave the Court’s conservative bloc its sixth seat, many predicted that Roe would fall. Fifty-three days after the leak, the Supreme Court issued their final decision on Dobbs v. Jackson Women’s Health Organization, put forth regarding Mississippi’s restrictive abortion legislation. As tearful celebrations from anti-abortion activists took place in the nation’s capital, thousands more gathered on the steps of the building bearing the words “Equal justice under law,” a phrase that seems more ironic than true.

While the Dobbs decision did not outlaw abortions, it transferred authority over this procedure to individual state governments. Some states, such as Utah, Louisiana, Oklahoma and Missouri previously passed “trigger laws,” or laws that took effect the moment Roe was overturned. States throughout the country went on to enact legislation encompassing near-complete bans on abortion without exceptions for incest or rape. Conversely, other states like New Jersey declared themselves sanctuaries for reproductive rights, reassuring citizens that abortion would remain legal.

Amongst the most severe laws are those criminalizing the procedure — penalizing doctors and healthcare providers with prison sentences of nearly 100 years for administering abortions. Several states omitted rape and incest as exceptions for receiving an abortion, only allowing for the procedure in scenarios where the parent’s life is deemed to be in peril. However, by constructing these laws in language that leaves this criterion intentionally vague, these states are effectively preventing doctors from performing any abortions out of fear of legal retribution.

Regardless of the evident contradiction of a party that prides itself on freedom regulating bodily autonomy, the ability for states to enact their own abortion legislation has already had dire implications for those whose lives depend on these services. Not even two weeks after the Dobbs decision was announced, the story of a 10-year-old rape victim who had to travel from Ohio to Indiana to receive an abortion became a national headline. And while those throughout the country grieved for this girl who had not yet reached her teen years, Republican legislators further tightened the suffocating grip they had forced over the throats of healthcare providers.

These circumstances raise a question over the definition of liberty in a nation that will mandate that a child carry a fetus to term, a country that will place every obstacle in the path of a doctor who must perform a life-saving abortion for a parent writhing in agony during an ectopic pregnancy, a country that stands as an idyllic symbol of justice to everyone but those who wish for the right to decide when, if or how they want to bring another human into the world.

While states race to define life, jabbing at blastulas exhibiting electrical activity and labeling them as heartbeats, the contrastingly sentient beings carrying these cells are being reduced to vessels for procreation. As Republican legislators preach of a victory for the unborn, the living stand before them, wondering when they too will deserve the right to a fair and free existence.

The Dobbs decision revealed what has already been clear to far too many Americans — that the quest for control over people’s bodies supersedes individual rights to self-determination. Ultimately, as restrictions continue to strip reproductive rights from vulnerable communities, true “pro-lifers” can be seen offering support to those affected by this legislation, demonstrating compassion and care for the living, breathing people that they are surrounded by and persevering in the fight for these rights as November approaches.