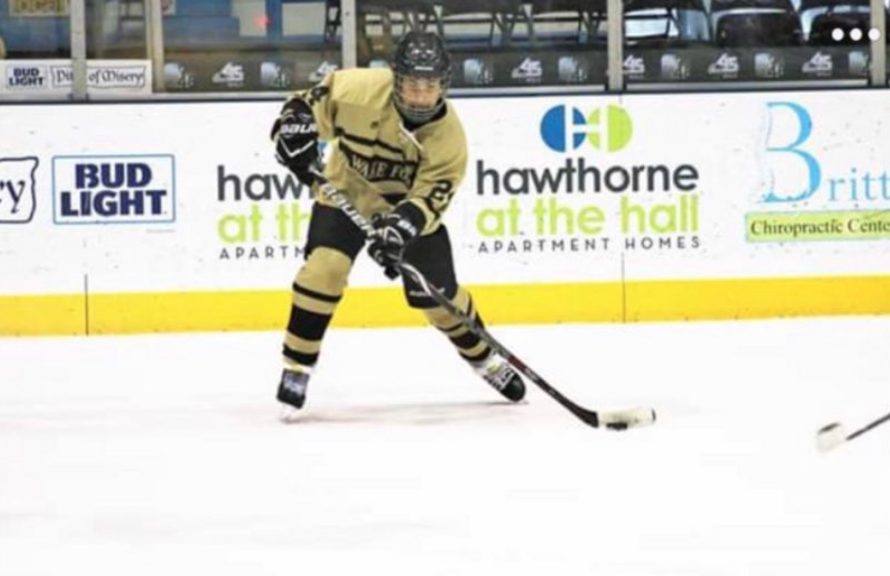 Jacob Grossman (‘20) is a former Wake Forest club hockey forward from Tampa Bay, Florida who recently graduated. He served as the President of the team his senior year and played three total years on the team. He scored four goals and had five assists during his Demon Deacon career and started three playoff games in the 2019-20 season. He reminisces on his years on the team and his time at Wake Forest, highlighting the team camaraderie and traveling as some of his favorite parts, as well as the values of commitment and discipline that he learned. He will now attend Georgetown Law school, where he may play on the club hockey team.

This Feb. 26 interview has been transcribed and edited for clarity and AP style. Listen to the full episode here and don’t forget to subscribe to the Old Gold & In Your Ears channel found on all podcasting platforms.

Jake Stuart: I want to start off and just ask you a little bit about the team and the chemistry. Obviously, you guys are a club team because we don’t have an actual, official hockey team on campus. But what is it like to be playing on a team here after playing in high school?

Jacob Grossman: Yeah, it is a club team, but the commitment level is pretty high. We practice Monday and Thursday and then typically have games on Friday, Saturday or Sunday. Normally two a weekend. It’s intense. It’s definitely one of the more competitive club sports. The travel my freshman year was probably the most travel intensive, and we went to West Virginia and Kentucky. My sophomore year we went to New Jersey, and his year just because of COVID we didn’t go as far. It is a commitment. I think it probably runs closer to an actual NCAA team than probably a club team just because of all the stuff we do.

Jack McKenney: And you are the team, right. It’s not like there’s a varsity hockey team or something like that. This is the team.

JS: Yeah, this is the only team.

JM: Which is special because I play club baseball and we’re obviously not the team. But you guys are the team, which is pretty special. Being from Florida, from Tampa, you got Lightning fans who are kind of spoiled with all those Stanley Cups recently. But how did you start playing hockey? How did you get into that?

JG: So when I was eight, I met the captain of the Lightning at the time. My stepdad was really good friends with him, Vincent Lecavalier. For my birthday party, we went to the game, we met him before, and ever since then I just fell in love. Hockey is really growing in Tampa, obviously, given the success, so it’s definitely more popular. And it was easy to get to the rink and stuff, so I just kind of liked it. And it’s also like when you’re from Florida if you can’t stand the heat in the summer, hockey is a good option.

JS: I feel like in North Carolina, we have a lot of, especially at Wake, we have a lot of people from the East Coast. So just naturally, you’d assume that the club hockey team would be pretty solid.

JG: There’s a lot of guys that played prep school up in the Northeast. And a lot of the guys we have on the team have friends that played Division I. I think a kid on the team was actually on a line with Trevor Zegras.

JS: I think it’s really interesting to talk about the hockey recruiting process because a lot of people play juniors for a few years and go to unfamiliar places to play hockey, and you don’t really know what’s going to happen. And some of the guys just chose to come [to college] because they didn’t want to go through all that. How involved were you in the recruiting process? Did you want to play for a small college? What was your mindset?

JG: I definitely was a hockey second kind of guy. Academics were primarily the driver. But when it did come down to a couple of schools, it was between Wake and Emory, and I did look at whether Wake had a club hockey team. For a school like Wake, it is a great thing to have a hockey team that’s just a club team because a lot of guys on the team could have tried to go the junior route and end up at a small no-name D-III school. It’s probably good for hockey but not good for anything else. So a big boost to Wake is having that team that attracts guys that want to come and continue playing.

JS: So you guys play in, I think it’s called the Atlantic Coast Collegiate Hockey League, the ACCHL. Who all do you guys play and where are they located?

JG: A big thing is to think ACC teams. NC State’s in it, I think [Virginia] Tech, Virginia too. So the traditional schools in the ACC minus Florida State. I don’t think is in it. There are a couple more teams in it like Georgetown and [George Washington].

JS: Who tends to be towards the top? I know UNC and NC State, are both pretty solid this year.

JG: The easiest way to think about it, and it’s kind of bad to say, but some of the easier schools to get into are typically some of the better schools. Honestly, UVA and VT have some really decent teams. The bigger schools, that it’s easier to get into, get the guys that aged out of juniors. That was actually a big thing this year. If you aged out of juniors, it was easier, because COVID took away playing time. So a lot of the guys playing now were juniors or guys that got cut because of COVID.

JM: Being on a club team is really special, particularly in your last year now. You start out freshman year, at least this is my experience, a couple of guys quit, and a couple of guys pursue different things. But you’re a part of that core group that stayed till the end. What’s it like making the friendships that you’ve made, and just being on the team for so long?

JG: I think that’s one of the biggest things we kind of took away from the team. After we lost to NC State this weekend, the seniors stayed in the locker room. One of the things we went over was like it’s going to hurt that we lost there. We would have loved to see what would happen if we got to play for the championship. But what we take out of hockey is so much more than what we take on the ice. It gives me alternative friends that you can hang out with. You have the fraternity on the one hand, and then you also have the great group of guys in the locker room that I get to hang out with every week.

JM: Yeah, that’s special for sure.

JS: But I wanted to talk a little bit, just a little bit, about that NC State game. You guys were leading three goals to nothing going into that third period, and even after 50 minutes of hockey the NC State Wolfpack had like 50 shots and we had I think 12 or so. We were up 3-0. Can you talk about the team’s grit and just staying in the game for that long?

JG: The shots don’t tell the whole story there. I think it’s been a long time in the making for us and NC State. During freshman year we played against them in the playoffs, I think we lost 5-2. In sophomore year, we lost to them in the championship game. But then we actually went to regionals where we beat them and sent them home, which was kind of nice retaliation or revenge game. And then this year, we beat them earlier. We gave them their only loss of the season in the ACCHL. Knocked them out, I think they were going to be the auto-bid to nationals, and know they actually have to go to regionals and fight because they lost to us.

But in the playoffs is a different story. And it was tough. I think we did a good job of keeping shots to the outside trying to take advantage of what we had. Part of the thing is you just want to dump the puck in and make their defense break it out, right. It’s kind of a weaker part of their team. They have really good forwards. So we stayed in the game. I think with six minutes left, we kind of got a bad call against us. That call doesn’t happen, I don’t know what happens, but take away one of the best defensemen on the team then you put the team short-handed that’s been playing in the defensive zone the whole game. It’s kind of tough and tiring. NC State just got a little momentum. And I think you could see it.

JS: You have played on the team long enough to see what it was like before and after COVID? What changed for you?

JG: We talked about it a lot in the room. And some of the harder stuff is normally there’s an adjustment period for the freshmen of “Okay, so this is gonna be what club hockey is, this is the commitment, this is the buy-in”. Then, they buy-in. It’s easier to have one grade in the system already trying to figure it out, but we had two grades who didn’t necessarily know the commitment level at first, didn’t kind of know our systems and how we play. We had two grades making that leap and schools like NC State did play last year and didn’t take off because of COVID just because the school let them. It’s kind of like the seniors haven’t played competitive hockey in two years and we’re just getting a bunch of guys adjusted.

JS: What are your plans then after graduation? Obviously, you’re a senior and we talked about it before the podcast but what are your thoughts on that?

JG: It was really tough. I think after the game it kind of hit a lot of the guys in the room that this could be the last time they play competitive hockey. I’m fortunate enough I’m going to school still. I’m going to Georgetown for law school, and they do allow law students to play on the team. I haven’t really totally made up my mind. I think before the game I was really leaning towards going to play for them and then after it kind of just sucked the wind out of me, the momentum. I don’t know. Depending on the time commitment of law school, I will probably try to play.

JG: I do. We’ll see where it goes. Another alternative I’ve looked into is sports agency. I know a couple of big guys in hockey agencies. So, I might intern there one summer.

JS: If there’s one thing that going through the team in the process, what did it teach you about yourself, in the four years being on the team?

JG: I think the biggest thing you learn from being on the club hockey team is discipline. It’s tough to practice at 9:30 on Thursday nights when all your friends are going out. It’s tough to say I can’t go to the date function or I can’t go to LR. You’re at hockey, but it’s where you want to be in on the weekends too. There are a lot of times you’ll miss social events on campus and kind of remind yourself like this is what you want to do.