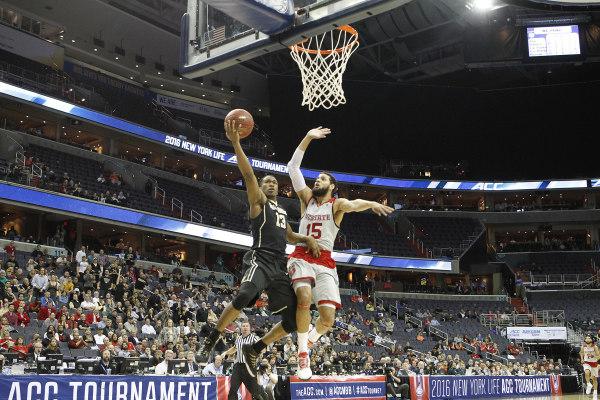 The Demon Deacons’ unfortunate and underachieving season came to an expected end in Washington D.C. at the hand of in-state rival North Carolina State.

The game was close throughout and the Deacs even had a lead late in the game. Unfortunately, the Deacs were unable to finish off a close game once again, and it made for a fitting end to a poor 2015-16 season.

Even though the Deacs had put themselves in prime position to defeat the Wolfpack, they once again, were unable to convert late game free throws and wasted too many oppurtunities. Perhaps the most symbolic scene for the season as a whole was the final possession of the game.

The Deacs had the ball with 15 seconds left, down by three points and with a chance to tie. Instead of showing any sense of urgency, the Deacs slowly walked the ball up the court and then stood around.

With the game on the line, the Deacs looked completely lost. It was as if they’d never practiced end of game scenarios or drawn up a play for this type of situation. Ultimately, after about 10 seconds of standing around, Bryant Crawford was forced to launch a 30-foot jumper that didn’t fall.

The possession — and game as a whole — summed up a season full of missed oppurtunities, wasted talent, shaken-heads and baffling decisions.

It is too early to fully evaluate the future of Wake Forest basketball and the job Danny Manning has done and is doing in his first two seasons at the helm, but looking back and attempting to understand what caused such a roller coaster of a season for the Demon Deacons is a good place to start. As the dust from the season begins to settle, and players transfer in and out, it will become much easier to evaluate the program as a whole moving forward. This past season for the Deacs was one of the most odd basketball seasons I have ever witnessed for a college program.

The Deacons entered the season with mild expectations, looking to improve from last years campaign and potentially compete for a bid in the NIT.

The Deacs were bringing back two star seniors and adding a plethora of freshman talent to the team. When star senior Codi Miller-McIntyre went down with a broken foot before the season started, it seemed that the season was going to go off the rails immediately as the Deacs faced a brutal, non-conference schedule.

However, the injury provided an opportunity for freshman Bryant Crawford to gain valuable playing time and the Deacs managed to pick up some marquee victories early in the season.

At 10-3 going into the ACC schedule, the expectations for the Deacs suddenly, and likely unfairly, shifted seismically. National analysts, bloggers and the Old Gold & Black journalist jumped on the Deacs bandwagon and suddenly determined that this team was capable and perhaps expected to make a run to the NCAA tournament.

While I have often been the first to point out how much of a disappointment I believe this season to be, I do not think that the shift in expectations as a fan base was fair to the team and has ultimately affected how we as fans and journalists judged the season as a whole.

Was the Wake Forest Men’s basketball season a disappointment? Unequivocally yes. Should the team have performed better, should the coaches have coached better? Absolutely. But was the season actually a failure? I would argue that many of the things that occurred this season are only going to help the Deacons next season.

While the Deacs recorded certainly could have been better multiple freshman gained valuable playing experience throughout the year that will only help the program moving forward.

Bryant Crawford had one of the best seasons for a Wake Forest freshman in years and looks like he will be a driving force in the program moving forward. In some aspects Miller-McIntyre’s injury helped the program greatly as it force Crawford into action.

Similarly, freshman John Collins saw extended playing time through the year and had the opportunity to face off against some of the best big men in the entire country. This will me very important for next season as Collins will likely be the starting Center or Power Forward.

Freshman Doral Moore, while getting the least amount of playing time, saw extra minutes late in the season and showed major potential for the demon deacons.

I believe that this core, along with the income recruiting class and transfers will be more successful and competitive during the 2016-17 season.

At the end of the day this was not the season that I’m sure the players or coaches expected, and it was hard to watch the seniors have to struggle through such a tough year, but Wake Forest showed signs of an extremely bright future this season.