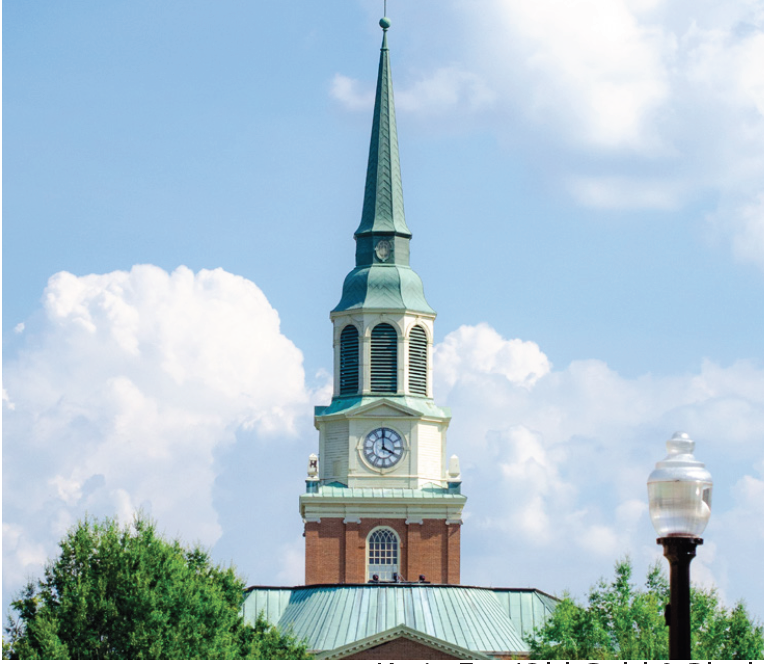 Last year's news will inform this year's decision; catch up below!

You are about to embark on your own Wake Forest journey — one that will undoubtedly be shaped by the people you’ll meet and the personal experiences you’ll have. It will also be marked by the events our campus and city will share together.

Not only are you stepping into your own Wake Forest experience that will be full of successes and failures, victories and tragedies and moments both exciting and mundane, but you would be remiss not to realize that you are also stepping onto a campus that has had its fill of defining stories this past year. Allow us to fill you in on what you’ve missed. These are the stories and trends that have recently impacted the campus you are about to call your own. The community you will soon meet here has been shaped by these recent events, and learning these stories will help you better understand the culture of Wake Forest.

The U.S. District Court for the Middle District of North Carolina heard a wrongful death lawsuit against Wake Forest. The lawsuit involved the death of a Winston-Salem State University student Najee Ali Baker who died at a party hosted by Delta Sigma Theta at the Barn, an on-campus event site, on Jan. 20, 2018.

During the first weekend after classes began, more than 300 students gathered outside a residence hall to protest the readmission of a student accused of assaulting another student in 2019. This protest sparked conversations surrounding interpersonal violence, but also racial violence, as the protest was largely focused on ousting a Black student from campus and not changing the culture of sexual violence. In the aftermath of the protest, the Old Gold & Black confirmed in an editorial that multiple Black male students were subjected to racial profiling. The protest prompted Student Government to create the Sexual Assault Prevention, Support, and Accountability Executive Advisory Committee (SAPSA).

Winston-Salem Police responded to reports of a shooting at Mount Tabor High School located just a few miles from the university. One student, William Chavis Raynard Miller, Jr., was shot and immediately taken to the hospital where he later passed away because of his injuries. The shooter was arrested that day.

The university announces it would not provide housing for international students during the month-long winter break. This sparked outrage among international students as COVID-19 quarantine policies made traveling home much more difficult. The next month, Residence Life & Housing announced a reversal of their decision regarding winter break housing.

The University Counseling Center moves away from its long-term treatment model to a single-session model until it can rebuild staff levels. The new model is designed to treat student concerns in one to four sessions. For students who need long-term care, the UCC helps connect them to off-campus counselors or alternative resources.

A Monday night email to rushees of Delta Kappa Epsilon about an upcoming party is disseminated to the campus community via Instagram. The email referred to sorority members degradingly and advertised that drunk girls could be easily taken advantage of at the party. The Panhellenic community quickly boycotted the party.

The Weaver Fertilizer Co. plant on Cherry Street (just over a mile from Wake Forest) catches fire, raising fears of a potential explosion. Those within one mile of the factory are advised to evacuate their homes, including residents of Deacon Place. The university canceled classes for Tuesday and Wednesday, and, following a student petition, canceled classes for the remainder of the week.

Wake Forest, in partnership with Student Government’s SAPSA Committee, releases a survey about the climate surrounding sexual assault on Wake Forest’s campus. The results of the survey are expected to be communicated with the campus this fall.

Following the rescinding of Winston-Salem’s indoor mask mandate, the university announced that masks would no longer be required in indoor spaces, including academic buildings. Professors could still require their classes to mask up last semester; however, this semester, that power will not exist.

Though she took office in July of 2021, Wente’s inauguration took place in March. During her speech, Wente announced the creation of new scholarships.

After a decade in office, former Provost Rogan Kersh announced his return to full-time teaching. Then Dean of the College Michelle Gillespie was chosen to succeed Kersh.

An annual speak out for Black students at Tribble Courtyard called attention to the often invisible labor required or expected of Black students and other students of color. The speak out also called attention to Wake Forest’s relationship with contractors and the treatment of those who work on campus. The organizers also distributed copies of the People’s Strategic Plan in response to the university’s strategic plan development this fall.

The Fourth Circuit Court of Appeals affirmed the earlier dismissal of a wrongful death lawsuit against Wake Forest.

In a partial cumulation of an effort to remove the name of enslaver and former Wake Forest President Washington Wingate from the campus, the university announced it would rename roads after four trailblazing professors: Dolly McPherson, Herman Eure, Elizabeth Phillips, and Marge Crisp.

For 106 years, the Old Gold & Black has been committed to reporting those stories that define one’s Wake Forest experience. We hope you follow our coverage during your four years to stay informed on and invested in your community.