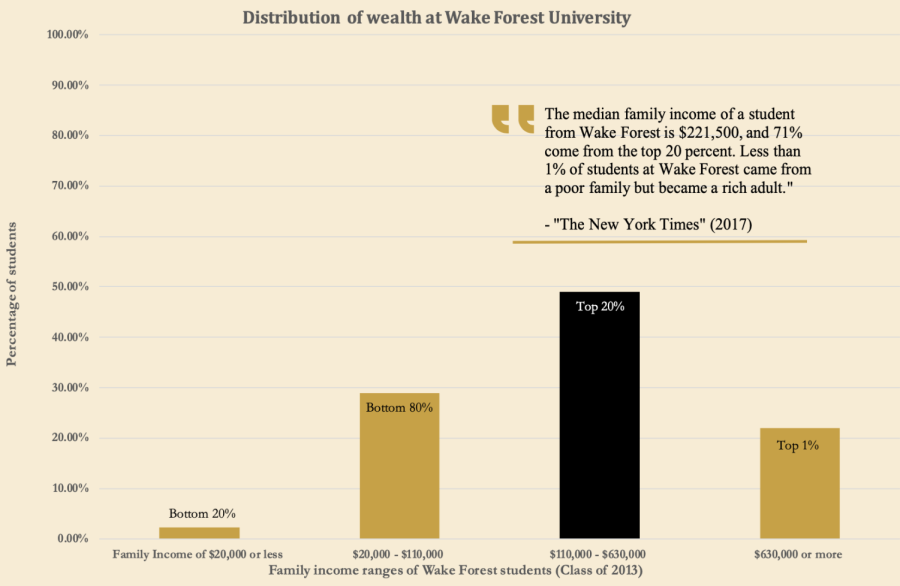 A 2017 New York Times study of wealth disparity at elite colleges found that 71% of Wake Forest students were in the top 20 percent, while only 29% were in the bottom 80%.

Education is a luxury that we cannot afford to undervalue. Unfortunately, many people do not make it as far as the college level. I’m hoping that I can use this position to advocate for the people who could not obtain access to what should, frankly, be deemed a human right.

Coming from a low-income family is often a disappearing act for the person affected and can somehow be perceived as a threat to those who are not affected by it. In my experience at Wake Forest, as well as in my hometown, this is a reality that I cannot avoid.

I would have to use two hands to count the number of people who have proclaimed that I am “lucky” to be receiving financial aid for university. I would need several more hands to count the number of people I hear complaining about being made to pay the full price for a college education. Before addressing this, I do want to clarify that I understand that Wake Forest is a particularly expensive institution. This is reflected clearly in the demographics of the student population.

The National Center for Education Statistics reports that only 34% of incoming students received grants or scholarship aid for the 2019-2020 academic year. Additionally, a New York Times study estimated that the median family income of a Wake Forest student is $221,500. This same study concluded that 71% of student households come from the top quintile of families by household wealth.

Putting those figures in reverse, only 29% of students come from the bottom 80%. Six-figure incomes are commonplace here. This in itself is not a bad thing at all, but it becomes problematic in terms of students’ ability to empathize with others of various backgrounds.

I believe that this lack of empathy is often not malicious but rather a sheer act of ignorance coming from those who do not know any better. I mentioned previously that I have been referred to as “lucky” for receiving financial aid. For those who have this thinking pattern, I would like to ask you a question: Don’t you think I would rather have the capability to pay the full tuition?

Even students whose households make more than $100,000 a year are still capable of receiving financial aid. The National Center for Education Statistics shows that households making $110,001 or more in income still, on average, only had a net price of $52,236 for attendance in the 2019-2020 academic year.

The average cost of attendance for this same year was about $65,000. This means that even households with over $100,000 in annual income — something that many people can never imagine — received about $13,000 in aid, on average.

It may seem like harmless banter, but remarks on how much you have to pay to attend school here often put students who are receiving aid in a strange position. This is where the disappearing act comes into play.

It is significantly easier to pretend to carry the same woes as my peers, rather than to say “oh, I actually don’t pay that much.” Not only is the latter answer likely to bring an awkward end to a conversation, but it is often a source of shame for many low-income students. So instead, we disappear into that rich facade. If I can just pretend to be rich enough, then maybe no one will ever know.

The difficult part is the fact that I will always know.

When I was in elementary school, I had constant nightmares about tornadoes because one teacher made a thoughtless comment on how people in mobile homes die if a tornado comes through.

In middle school, I cried in the bathroom because someone said my clothing — which was handed down from my mom — made me look like a grandma.

In high school, I fought with school boards on tuition increases for out-of-district students like me. My parents did everything they could to pay a fee for me to attend school in a different district because my original school was not offering challenging enough coursework for me. Even if they waited up until the very last day to pay it, they scraped enough money together.

Not many people like me make it here. This was a precious gift that I cannot afford to waste. I don’t have something to fall back on, and neither do a lot of people in the world. I believe firmly that education is a right and that all children deserve free access to the same resources. Until then, though, I ask you to do this. Be kind. Do not be ashamed of your privilege if you have it. In fact, proclaim it — being blind to discrimination only helps the oppressor. Choose your words with care, and remember that the world is only made better when you learn to respect the experiences of people who are different from you.