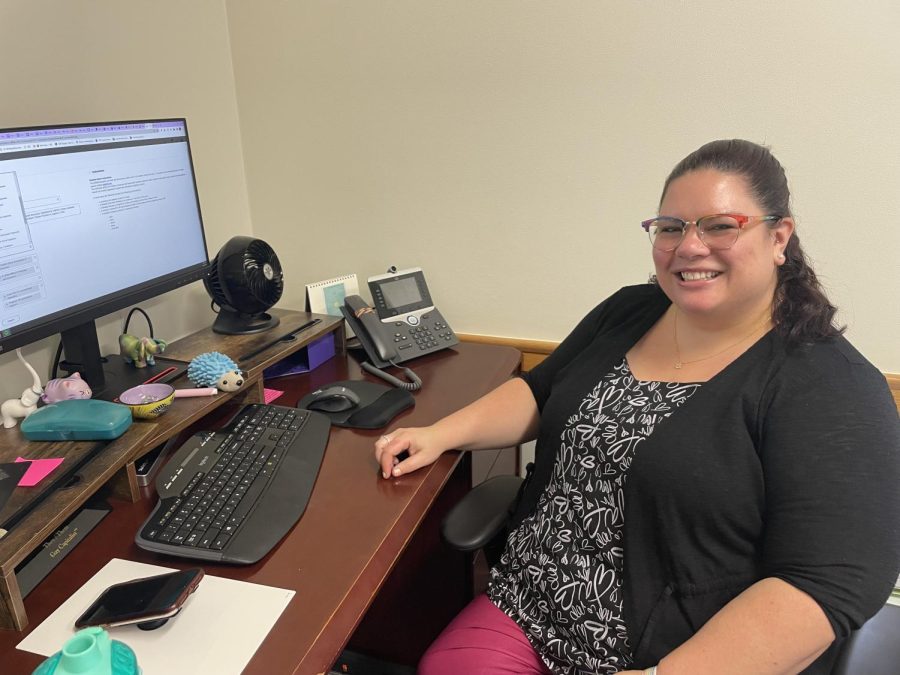 Interim Director Kayla Lisenby-Denson sits at their desk in the LGBTQ+ Center.

Kayla Lisenby-Denson, former manager for inclusive practice at the Office of Diversity and Inclusion, will succeed Dr. AJ Mazaris as the interim director of the LGBTQ+ Center.

Lisenby-Denson plans to support the new assistant director, Nayasia Coleman, and the new program coordinator, Antayzha Wiseman, in their work this upcoming semester and cultivate an inclusive, supportive campus community.

Lisenby-Denson joined the Wake Forest community in 2015 as the program coordinator for the LGBTQ+ Center and later assumed the roles of assistant and associate director. This past February, they left the LGBTQ+ Center to work with the Office of Diversity and Inclusion team as the manager for Inclusive Practice.

“Working in the LGBTQ+ Center for six plus years has been an incredible experience,” Lisenby-Denson said. “I have had the chance to develop and build so much of the current portfolio of the LGBTQ+ Center, and AJ Mazaris and I worked very closely together for many years, so I feel those previous experiences have prepared me to step into this interim director role.”

Women’s Center Director Shelley Sizemore also worked alongside Lisenby-Denson and feels that their contributions in the workplace have been significant and will continue to better the campus community.

“It has been a pleasure to work alongside Kayla Lisenby-Denson at Wake Forest, and I am excited to collaborate with them as they serve as the Interim Director of the LGBTQ+ Center,” Sizemore said. “Kayla’s attentiveness to student concerns, welcoming energy and passion for equity and inclusion will directly benefit the students, faculty, staff and alumni who interact with the Center.”

Lisenby-Denson believes their degree from the Wake Forest University Evening MBA program has helped shape their efforts at Wake Forest.

“In 2021, I graduated from the Wake Forest Evening MBA program where I focused a lot of my research and practice on diversity, equity, inclusion and change-making within leadership and organizational culture contexts,” Lisenby-Denson said. “The knowledge and experiences I gained through my MBA studies have already proven to be incredibly valuable to my work at Wake Forest, and I know I will continue to leverage that learning as I serve in this role.”

Some of their previous work at the LGBTQ+ Center involved developing and implementing the Developing, Empowering and Affirming Communities (DEAC) Allies program in 2020 and designing, facilitating and supporting the Change Agent leadership development program since it started in 2017. Their hope is that the LGBTQ+ Center will continue to be a valuable resource for the campus community and establish a space that promotes equity and inclusivity.

“My hope in this interim position is to lead in a way where the LGBTQ+ Center continues to show up within our campus community as a resource, support and space for community building and active engagement,” Lisenby-Denson said. “We will keep looking for places and spaces where students, faculty and staff may have inequitable experiences due to their sexual orientation or gender identity, and we will work to address those issues and dismantle the systems that marginalize people of diverse sexual orientations and gender identities.”