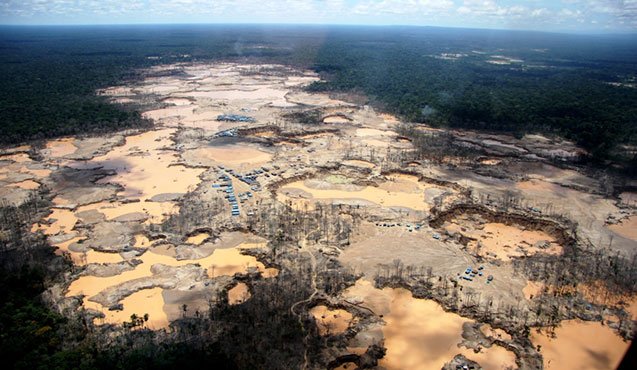 The Amazon Rainforest in Peru has been subject to deforestation.

After hours of hiking, 11 Wake Forest students broke through the dense vegetation onto a small cliff, exposing an endless expanse of rainforest stretched out beneath them. Clothes glued to their bodies by the wet air, they watched as storm clouds gradually approached them, drifting over the mountains to the north.

Gray streaks of rain poured onto the flatiron, which began the water’s inevitable journey to the vast Amazon basin below. Along the way, the water would pick up nutrients from the soil, serving as an essential mode of fertilization in this complex environment.

“We are standing on the last outlying ridge of the Andes,” Wake Forest Biology Professor Dr. Miles Silman said. “This is the last high point from here to the Atlantic Ocean, 3,000 kilometers away. You’re looking at the unbroken forest of the Amazonian plane.”

Silman has made this hike countless times. His annual visits to the Peruvian Amazon over the last 30 years have resulted in groundbreaking studies and a wealth of knowledge of the complex ecosystems of the Neotropics.

Over the few days prior, the group of study abroad students had traveled down the Rio Madre de Dios to Pantiacolla Lodge as part of a greater journey to see the wonder of the Amazon firsthand. Everything in sight was pristine forest, almost untouched apart from a handful of eco-friendly lodges and Indigenous lands.

But other parts of the Amazon are not so lucky.

Just outside of Manu National Park, which covers an area larger than Connecticut, pockets of the Amazon have been razed by deforestation and mining. Almost a fifth of the Amazon has already been destroyed, with the first three months of 2022 being the highest Amazon deforestation ever recorded, according to Brazil’s National Institute for Space Research.

These trends are threatening and currently impacting complex ecosystems within the Amazon, which are home to some 30 percent of the world’s biodiversity. This biodiversity is essential to the health of the rainforest, and by extension, the slowing of climate change on a global scale.

Gazing out at the untouched landscape, the study abroad students finally understood what conservation efforts aimed to protect — and what competing political and corporate interests aimed to reap for economic gain.

As global warming increases in tandem with deforestation, we are actively destroying an essential tool for mitigating the effects of climate change. Trees that sequester carbon are being cut down. Species are being driven extinct. Ecosystems that are foundational parts of global climate are being permanently damaged. Much of this is irreversible, but much can still be saved.

“If you don’t do anything, you know that things are going to be bad,” Silman said. “If you do something, there’s a chance you can pull it out. If the plane’s going to crash, you fly that thing all the way to the ground. You never stop.”