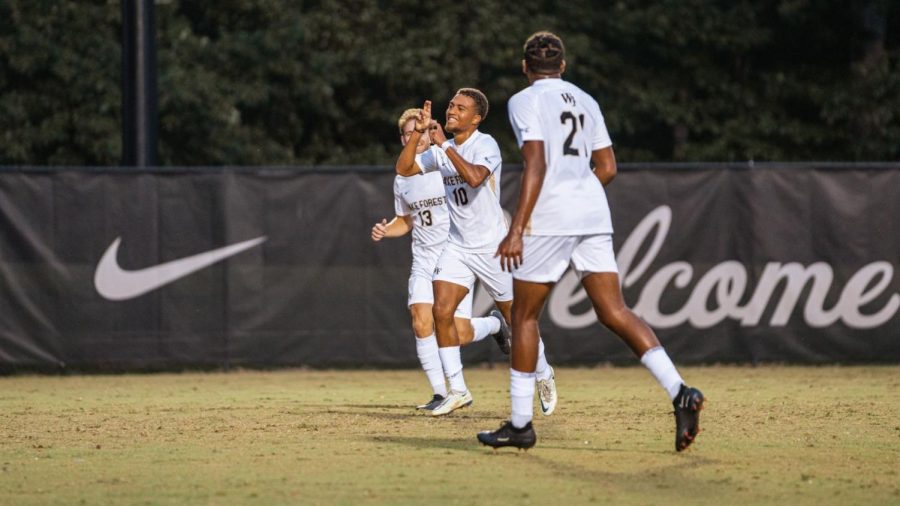 Oscar Sears (wearing No. 10 in the center) celebrates after scoring what would be the deciding goal against Air Force.

Following a pair of draws through its two exhibition games, Wake Forest men’s soccer has stacked two wins this week in front of lively home crowds at Spry Stadium. Thursday’s game proved to be a slow burn, with the Demon Deacons topping the Knights of the University of Central Florida (UCF) in a 1-0 match. Then on Saturday, Wake Forest defeated Air Force 2-1.

The Demon Deacons swiftly claimed the time-of-possession battle in the first half, with stellar defensive alertness that kept UCF away from the goal all the way up until the 20th minute. Wake Forest seemed to be rooted in the offensive zone for much of this time; they led 8-2 in shots by the 30th minute. UCF rarely found any open spot for attack and it seemed that captain and junior Garrison Tubbs was always anchoring the defense in transition, often in tandem with sophomore defender Bo Cummins.

At one point, Tubbs had managed to disrupt a through pass into the 6-yard box, but a UCF player was able to track down the ball and looked  to give goalkeeper Trace Alphin a chance to make his second save. However, Cummins materialized between the two and was able to redirect the shot out of bounds.

As the subsequent corner kick soared into play, Cummins met it with a header to clear it once again. With just seconds left in the half, a UCF player tracked down the ball to recreate some offense out of the prior missed opportunities. Cummins immediately raced to face him and locked down the ball to end the half. Those seated on Alumni Hill roared in approval, and Cummins waved on the crowd noise as he and his teammates celebrated his defensive ferocity.

Despite the showcase on defense, Wake Forest still entered the second half looking for its first score.

The shots had been plentiful up to this point, yet none had hit their mark just yet. Defender Hosei Kijima had gotten an opportunity in the 20th minute when he outraced three defenders to earn a shot, but the speed wasn’t enough.

Kijima only had to wait until the second half.

Mere minutes into the last 45, defender Jahlane Forbes fed a pass to midfielder Oscar Sears, who apparently had the same idea as Kijima. Sears sent the junior from Yokohama a care package over the heads of three defenders; Kijima timed his run perfectly and headed the ball into the top right corner of the goal.

The goal was the only one of the match, which the Demon Deacons closed out with more suffocating defense.

“It felt amazing to have a clean sheet from a tough opponent, knowing that we’ve put in a hard 90 minutes on the line,” Cummins said. “It starts from everyone knowing their roles on the team and finishing to the very end. As a defender, there’s always going to be challenges and situations that may lead to a goal stopping save to help win the game for the team.”

The offense found their groove quicker on Sunday against Air Force, and the first goal brought more to celebrate than just getting on the board.

In the 17th minute, defender Prince Amponsah slipped a pass through two defenders to midfielder Cooper Flax, who promptly pressed the defense by sending a through pass toward fellow freshman Fred Walent. Walent sent a scorching strike into the top left corner of the goal, sending the bleachers into a frenzy.

Air Force’s goalkeeper got a hand on the ball, but it wasn’t enough to stop the heat Walent had provided. On the other side of the field, Trace Alphin’s awareness was on full display once again after notching three saves against UCF.

A second score for the Demon Deacons came in the 43rd minute after a spark from freshman Aethan Yohannes on defense. Yohannes forced a turnover within the six-yard box, and he and senior David Wrona ran with one another to find Oscar Sears in space.  Sears connected with the goal from way out for the Demon Deacons’ second goal of the night.

Once Air Force found their way onto the scoreboard in the second half, there was a shift in the tone of the game. The score came from Thaddaeus Dewing and was created off of some miscommunication from Wake Forest while they regrouped after gaining the ball from a defensive stand.

From there, the game became much more physical, with players from both squads hitting the grass hard during battles over cleared balls.

The Demon Deacons held their ground, however, not letting the physicality of the game wear them down. In the 59th minute, Wake Forest’s Takuma Suzuki found himself as the last line of defense in a prime scoring opportunity for Air Force. His sprint to the ball culminated in a slide tackle that managed to sabotage the play.

The game concluded with Wake Forest on top, 2-1. Though a scrappier showing than the game against UCF, it was refreshing to see freshmen energize the offense.

Next Saturday, Sept. 3, Wake Forest will travel to take on the University of Alabama at Birmingham, who have also won two games to begin its season.