The Demon Deacons defeated Milwaukee, Rhode Island and Georgia and tied with Auburn 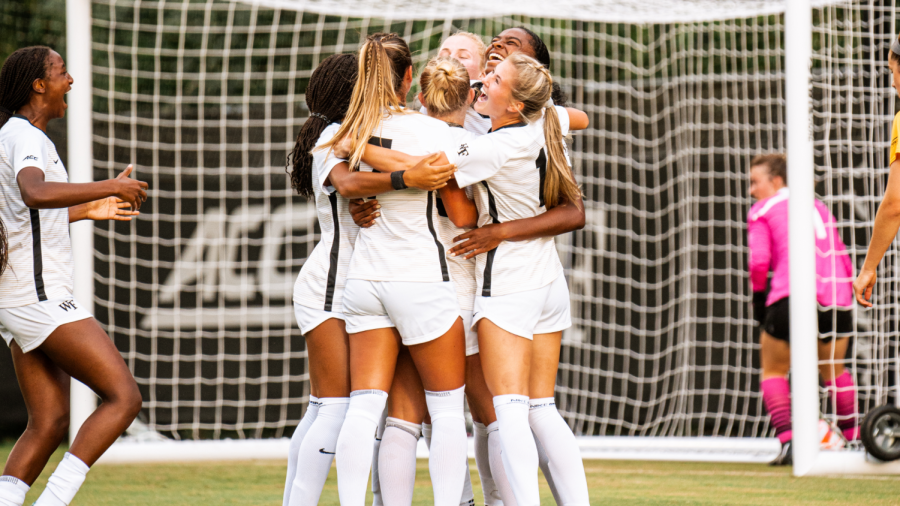 The women's soccer team celebrates in front of the net.

Wake Forest women’s soccer has started the season strong, winning three out of its first four matches. The Demon Deacons are unbeaten and will be looking to continue their invincible run.

The Demon Deacons opened up the season facing off against Milwaukee at home on Aug. 18. A dominant performance on both sides of the ball allowed the Demon Deacons to shut out the Panthers 2-0.  On Aug. 21, Wake Forest defeated Rhode Island 4-1. Then on Thursday, a late goal sent Wake Forest over Georgia 1-0. They then battled Auburn to a draw on Saturday.

On Aug. 18, freshman forward Hannah Johnson had quite the debut, scoring her first career goal a mere four minutes into the game. Junior Liv Stowell, who made her first career start as well, crossed the ball into the box and created the scoring chance for Johnson. In the first half, Wake Forest controlled 75% of the possession and had six shots on goal. Junior Sophie Faircloth missed an opportunity to double the lead for the Demon Deacons when her shot bounced off the post in the 34th minute. Wake Forest continued to dominate in the second half, and in the 54th minute, sophomore midfielder Emily Morris netted her first career goal. Redshirt junior goalkeeper Kaitlyn Parks ended the match with a clean sheet, the 14th of her career.

Against Rhode Island, Wake Forest got off to an early start again with graduate midfielder Giovanna DeMarco scoring in the seventh minute from a corner. However, Rhode Island quickly answered in the 15th minute and tied the game up. The young talent continued to shine and deliver for the Demon Deacons with freshman forward Alex Wood scoring two goals, 10 minutes apart from each other to give Wake Forest a 3-1 at the half. In the second half, the Demon Deacons continued to control possession and scored their final goal from a set piece. A freekick from freshman Caiya Hanks created the final scoring chance for Liv Stowell, her first career goal. Wake Forest dominated, outshooting Rhode Island 22-7 and winning 15 corner kicks on the night.

In its matchup against strong SEC opponent Georgia, Wake Forest played stellar defense and ultimately broke through with a late goal. A defensive battle on both sides led to a scoreless first half. Wake Forest goalkeeper Kaitlyn Parks only had to make one save in the first half, while her teammates put the pressure on the Bulldogs. Alex Wood put a shot on goal in the first three minutes, and Caiya Hanks also had another look at goal. Yet in the 77th minute, sophomore defender Tyla Ochoa found the back of the net from a corner kick by Hanks. This was Ochoa’s first career goal, and that goal ended up being the game-winner for the Demon Deacons. With just five minutes to go, Georgia looked to level the contest but Parks forced a final shot over the bar to record her 15th career shutout. Wake Forest won the contest 1-0 and looked to continue their unbeaten streak against another strong SEC foe, Auburn.

On Sunday against No. 16 Auburn, Wake Forest looked to build on its momentum established in their first three matches. The Demon Deacons set the tone early, attempting two shots in the first 90 seconds of the game. Wake Forest was aggressive with nine shots in the first half, three of which were on goal. Auburn had no answer for the Wake Forest defense and did not register a shot on goal until the 41st minute. Auburn had the opportunity to capitalize on a penalty kick in the first half but was denied with back-to-back saves from the goalkeeper Parks. The defensive battle continued in the second half with neither squad breaking the tie. The match ended in a draw 0-0.

“I like what we’re doing. I couldn’t be happier with the freshman,” he said. “They don’t seem to be phased by what’s going on at all.”