The redshirt freshman passed for 288 yards in his starting debut 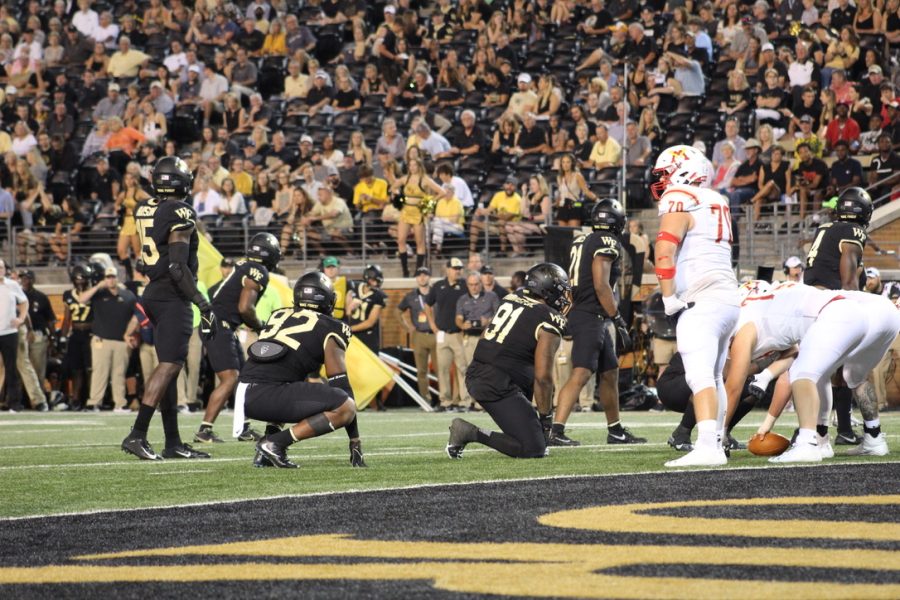 Mitch Griffis (No. 12 on the left), filling in for Sam Hartman, led the Demon Deacon offense to 44 points and a 1-0 start.

The energy returned to Truist Field when Wake Forest football kicked off their season with a 44-10 victory against VMI on Thursday night. Wake Forest also set a record for student attendance for an opening night, with 3,752 students attending

Expectations were high for starting quarterback Mitch Griffis, who made his first collegiate start. Griffis’s offense dominated, and the redshirt freshman posted impressive numbers: 21/29 (.724), 288 passing yards and three TD passes. Griffis did struggle on his keepers, netting -9 yards on the night.

The Demon Deacons took a while to wake up from the offseason. The defense took some time to settle into coordinator Brad Lambert’s new defensive scheme, and VMI challenged them early. Yet the Demon Deacons always had an answer and forced numerous three-and-outs to put the ball in the offense’s hands. In his first drive under center, Griffis marched his team down to the red zone until he was sacked on third down, and Wake Forest had to settle for a field goal.

The offense was undeterred, however,  and finally got going when running back Christian Turner broke numerous tackles and stayed on his feet for a 35-yard touchdown run. On the next drive for the Demon Deacons, the run game opened up even more opportunities, with Justice Ellison finding a massive lane and breaking through for a 45-yard run. This placed Wake Forest right in the red zone, where the Mitch Griffis show officially began. On third down, Griffis came under pressure but scrambled out of the pocket and found wide receiver Taylor Morin in the right corner of the end zone for his first touchdown. After the first quarter Wake Forest led 17-0.

On the first drive of the second quarter, Wake Forest was making a steady drive down the field. But on two occasions big plays were called back for offensive holding, and the Demon Deacons were forced to punt. Penalties were a common theme throughout the contest, especially holding penalties. On the next drive, Griffis found wide receiver A.T. Perry on the left sideline to bring Wake Forest into the red zone. A couple of plays later, Griffis connected with Ellison for the touchdown only for it to be called back for holding yet again. The Demon Deacons were then forced to kick a field goal to put them up 20. After a major defensive stop on 4th down Wake Forest received the ball in excellent field position at the 34-yard line, but once again had to settle for a field goal to put them up 23-3 going into halftime.

Wake Forest started the second half sloppily; another holding penalty sent them back immensely and they were forced to punt. On the punt, Ivan Mora had trouble with the snap but was able to get the punt off which dribbled down to the VMI 10-yard line. A defensive stop set up Griffis and the offense with great field position. Christian Turner continued to open up the run game for the Demon Deacons, he made a massive run of 24 yards along the right sideline to put Wake Forest in scoring position.

Three plays later, he finally stuffed it in the end zone for his second touchdown of the night. Wake Forest’s defense was looking for their big play all night, and they thought they had it when Isaiah Wingfield made an interception and returned it 46 yards for the score. However, the play was called back for roughing the passer, an unforced error that cost the Demon Deacons points and momentum. VMI scored their first touchdown of the game on their next drive and made a dent in the lead with Wake Forest still leading 30-10.

Special teams performed well; Ke’Shawn Williams had a 38-yard kickoff return to start. Griffis closed out the third quarter with a stellar drive, finding Donavon Greene on the first play for 20 yards. Greene returned from injury, was targeted eight times and finished with 63 yards receiving. As the game progressed, Griffis’ confidence began to grow and it showed when he completed a beautiful 27-yard pass to tight end Blake Whiteheart. Yet, on the two-point conversion, Griffis made a scramble up the middle, only for it to be called back for holding, and the offense had to settle for the extra point.

To start off the fourth quarter, Wake Forest’s defense finally got their big play when Rondell Bothroyd had a strip sack to put the offense at the 29-yard line. Griffis’ final drive was three plays and found wide receiver Jahmal Banks, which was truly the icing on the cake for him in his debut.

“I thought Mitch played really well. I said going into it, I think we could win a lot of games with Mitch.”

Wake Forest won the game 44-10, an amazing debut from Griffis, and strong play in all three phases of the game made this an easy one for the Demon Deacons.

Wake Forest committed seven penalties which cost them big time. Not only did the penalties cost them big plays such as the pick-six, but it also didn’t allow Clawson to play his younger guys earlier and give them the crucial time to get settled in the new environment. Clawson was adamant that they need to iron out these sloppy mistakes because there will be close games down the line where it could cost them. He said they will definitely have more officials at practice this week.

Clawson had mixed emotions about his team’s performance in his postgame press conference.

“Proud of the win, but really sloppy, penalties were awful.”

Mitch Griffis’ debut was a bright spot, and he said he had a blast out there.

“It was like playing in high school again, I haven’t really played a football game in two years,” said Griffis.

Griffis surely proved himself tonight but when asked about this in the postgame he said this, “I just felt like I did my job.”

Griffis made a point of showing his belief that Sam Hartman is still the team’s leader — he’s their guy, and this is his team. Wake Forest heads to the Southeastern Conference’s Vanderbilt next Saturday, which will be another test for Griffis and the team.