The NBA star's high school, West Forsyth, named its basketball court after him 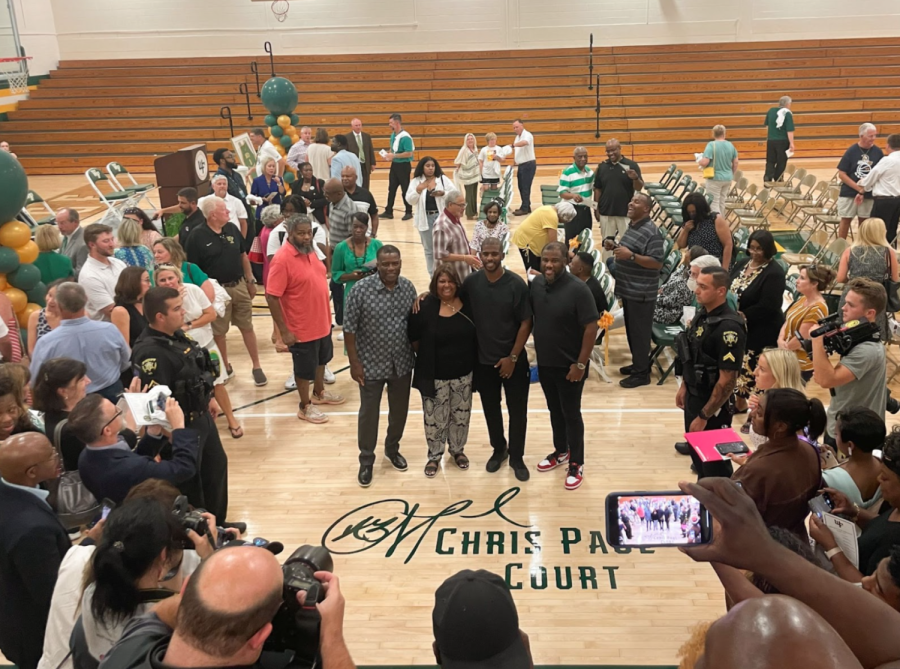 Chris Paul (second from the right) stands on the court which now bears his name.

Paul, nicknamed “The Point God,” graduated from West Forsyth High School in 2003 as a McDonald’s All-American and the North Carolina Basketball Player of the Year. After high school, he attended Wake Forest from 2003-2005 and was first team All-American. In 2005, Paul joined the NBA and the New Orleans Hornets. Alongside being a 12-time NBA All-Star and two-time Olympic gold medalist, Paul’s plethora of awards includes the 2006 NBA Rookie of the Year and MVP of the NBA All-Star game in 2013. He was selected as one of the top 75 players in NBA history and currently plays for the Phoenix Suns.

Paul unveiled the inscription that marked the newly dedicated court, joined by his family and close friends. In addition to naming a court in his honor, principal Kevin Spainhour announced that Paul is the first member of the new West Forsyth High School Hall of Fame. When asked about Paul’s legacy at West Forsyth and the Winston-Salem community, Spainhour emphasized how Paul’s leadership stretches beyond the basketball court.

“Chris Paul and his family are ongoing supporters of our Winston-Salem/Forsyth County Schools community,” Spainhour said. “Beyond his athletic achievements, which are many, Chris’ impact through community partnerships and a willingness to be a servant leader is really what separates him for this distinction. Our West Forsyth Village is proud of his journey and is honored to place his name on our court.”

“He was a leader on and off the court,” McManus said. “[Paul’s] legacy will live on for generations to come at West Forsyth High School and the entire community.”

After Athletic Director Mike Pennington listed Paul’s athletic accomplishments, former principal Kurt Telford discussed Paul’s character. He recalled anecdotes of the basketball player’s time as a student including his race for student body president and the Krispy Kreme doughnuts he distributed during his campaign. Telford emphasized Paul’s identity as a student and member of West Forsyth’s community.

Unlike his fellow speakers who spoke from afar at a podium, Coach David Laton, Paul’s high school basketball coach, approached his former player at his front-row seat. He spoke directly to Paul and his family as he shared his memories of his time spent with the NBA All-Star. The audience intently listened to the intimate exchange between Paul and his coach. While describing Paul’s career as a high school and later college athlete, Laton humorously discussed Paul’s decision to attend Wake Forest after graduating from West Forsyth.

“Chris, you read all [those] books; you better go to Wake Forest,” Laton recalled telling Paul years ago.

After the official dedication of the court, Paul addressed the junior and senior class students that filled the bleachers on either side of the court. He spoke with warmth and humor, frequently referencing his family and those who impacted his athletic journey. As he reflected, Paul emphasized the significance of hard work.

“At the end of the day, you realize that if you want to reach your goals, you have to sacrifice,” Paul said.