Beach Weekend coolers are holding us back 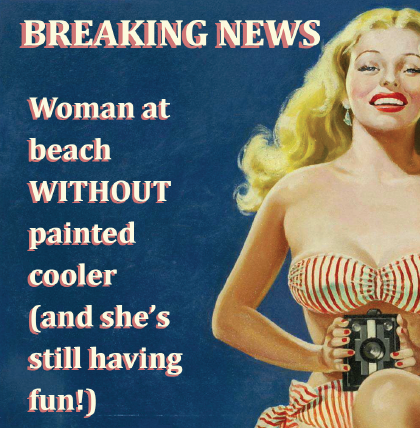 Painting water coolers for those who would not do the same for you is emblematic of male-dominated hookup culture, writes Marta Zach

The scene is set as follows: you’re lying face down in a green-water Myrtle Beach pool, the muffled sound of “Pepas” by Farruko, your going-out anthem, blares through a waterlogged speaker.

All that remains in your memory is the beautiful cooler that you painted instead of doing your biology homework. The fraternity brother who chose to bring you sheds a single tear. Actually, it was just sweat. But he fears not! There is retribution over the horizon: the next girl he decides to bring next year will paint a cooler just as good. The show must go on.

I don’t believe in hyperbolizing pessimism or cynically describing situations that I disagree with as inherently negative. Greek life can be incredibly fun. As far as I know, most people don’t regret being a part of Greek organizations on campus. Some boys treat girls splendidly, whether those girls are just friends or their girlfriends. Beach weekends allow for a particular type of bond to form — the kind created only in small spaces and through spontaneous and rogue adventures.

It seems untameable, Kat-Stratford-esque, even shrew-like to openly condemn what is supposed to be an exciting and seemingly almost integral part of a well-rounded college experience: The Beach Weekend. But I find that the girls who are asked to these events often put in the excessive, unrequited effort. Events like beach weekends tend to objectify women and thrive upon a male-centric college culture.

Painted coolers remind me of the sweater curse, which is an analogy to describe regard that is not reciprocated: if you knit a sweater hoping to impress your significant other, they will lose interest and break up with you, as it occurs to them that they would not knit you a sweater.

Would the man you’re painting a cooler for do the same for you?

You aren’t an artist either, though — you’re pre-med. But you took the time to buy paint, to sit down, trace sketches and make the cooler look quite good. He’ll compliment the bottles of Tito’s that you stocked it with. You didn’t want to bring Aristocrat, because that is just the cheap stuff that frat guys give to girls in basements.

That’s how easy it is: he chooses a girl he finds pretty from a pool of available candidates. She agrees, because on college campuses, getting to go to a beach weekend is construed as validation. Someone is cool if they get to go to this exclusive fraternity event. She’ll make the cooler and fill it to the brim with food and alcohol in exchange for getting to sleep on a communal couch with no blanket. The cooler ends up in Narnia.

Yes, he paid for her to come. But he would have paid for the next girl, too. It is a transactional exchange that benefits one party a lot more than the other.

College hookup culture isn’t composed of awful men and subservient women, but it tends to sway in the favor of men, where women are viewed as attainable and disposable.

I’ve noticed this trend, which is applicable to all aspects of life: the world tends to worsen in the midst of complacency. What is being perpetuated remains alive and well, and that often makes it hard to see what is right before us or how it may not serve us. When we are inconspicuously forced to disregard our own discomfort in order to not get left behind as the entity of the group barrels forward, we don’t stop to think about what the repercussions of this are or what we are subtly but surely sacrificing in order to meet social demands.

Your guy friends aren’t terrible people for wanting to bring you to a beach or mountain weekend. Being close with members of a certain fraternity doesn’t make you anything other than a great friend who offers special companionship that is valued by the members of that chapter. Being someone’s date to a beach weekend can be incredibly fun, and many askers are well-intentioned.

But my advice is this: next time he asks you to come to a beach weekend, do not compromise on your comfort, or time or effort unless you know that your company is valued. Only paint a cooler if you truly love painting coolers. Each situation is subjective: be familiar with what it means to say yes, but also be capable of standing behind the “no” that you are entitled to.

Some might argue that beach weekends are for the brothers and that being a date is just for fun. That rings true, but, with that being said, do not let your company be disposable. If he wants a date to a brotherhood event, he ought to treat you as such.

Your worth is not determined by how many guys call you pretty or want to hook up with you. You are the coolest girl in the world because you decide to be, not because you are chosen for this or for that. Your prospects are in your future, not on some arbitrary roster.

Always choose you — your time and effort and company are incredibly valuable and truly irreplaceable.